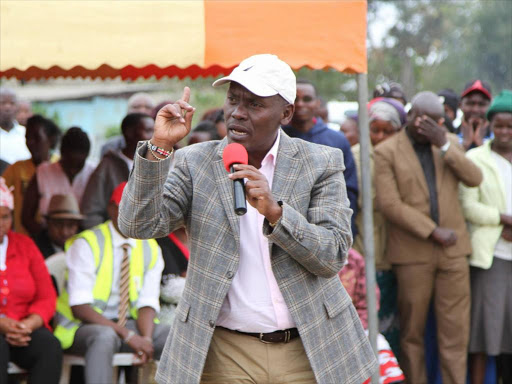 He said they marked buildings for demolition to solicit for bribes from the owners.

The governor said he would not hesitate to take action on any officer involved in fraudulent activities.

Kabogo spoke on Monday in Mwihoko, Ruiru constituency, when he issued 71 motorcycles to boda boda operators. The motorcycles were bought by the county government through the Biashara Fund.

“Those officials marking houses are crooks and we shall send them home, because we are not in the business of demolishing peoples' buildings. There is a legal process for those who have put up unapproved buildings,” he said.

Kabogo said the six employees from the Housing department were relieved of their duties last week.

He said his government will not be charging hawkers levies. He said traders are free to do business without being harassed by county enforcement officials, as long as they observe law.

“We are considerate of the well-being of all hawkers. From today, hawking is free and you are free to do business without anyone asking for licences,” Kabogo said.

He also defended his development record and accused his rival and Kabete MP Ferdinand Waititu of tarnishing his name during “funerals".

Kabogo said he is not defending his seat because of money. He said he acquired his wealth before he entered the political arena.

“I am not in politics for money and I want people to know that I bought my first helicopter when I was a young man,” he said.

"Those people thinking Kabogo is here to enrich himself, should be ashamed of themselves.”

He termed Waititu "an opportunist who cannot be trusted with leadership of the county".

“Beware of this man whose only agenda is to go to funeral meetings and speak ill of Kabogo. Let him tell us what he has done for his Kabete constituents,” Kabogo said

He said Kiambu is the fastest growing county and it deserves a bigger budgetary allocation from the Treasury.

The county has a population of nearly two million people.

Kabogo also said the Central region would only back Deputy President William Ruto for presidency if "he meets certain conditions".

He said the region must have a stake in any future governance of the country, hence the need for negotiations with whoever succeeds President Uhuru Kenyatta.