Their numerous requests for compensation from the government haven't borne fruits.

•He, therefore, said the government compensates victims genuinely upon prior investigations and provision of sufficient evidence of the occurrences. 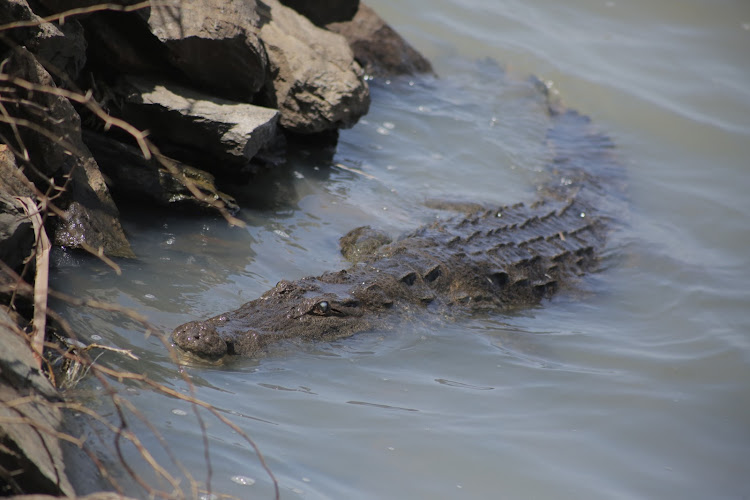 Crocodile on the shores of Kokwa Island in the flooded Lake Baringo.
Image: FILE

Winnie Keben, 28, from Meisori village in Baringo South was attacked by a crocodile in 2012 and lost her leg.

She says since then, her life has worsened.

Keben said on that day, she was fetching water on the shores of Lake Baringo around 5 pm before the huge reptile shoved up, grabbed her leg and pulled her into the water.

“I had already surrendered my life but luckily my husband heard my screams and rushed to save me,” she said on Sunday.

She said while her husband was struggling to pull her leg out of the crocodile's jaws the beast released her and jumped on him.

“He screamed again then passersby heard and rushed to rescue him,” Keben said.

They were rushed to Baringo County Referral Hospital where her husband was treated and discharged while she was referred to Nakuru General Hospital, where doctors were forced to amputate her leg.

Keben, a mother of five said she used to work as a casual labourer on people's farms in the Perkerra Irrigation Scheme, but she stopped after losing her leg.

“I have no option but to stay at home and wait upon my husband, a boda boda operator to hustle and feed the family,” she said.

After the attack, the aggrieved family, fearing for their lives, moved to Meisori village, 7 kilometres away.

Keben is among several victims of fierce Crocodiles and Hippos attacks in Lake Baringo whose numerous appeals for compensation haven't borne fruits.

David Kiplagat and Winnie Chebii from Forest village near Lake Baringo are yet to come to terms with the loss of their 10-year-old first-born son Fabregas Kemboi to a hippo attack in February 2019.

He was in the company of his colleagues fetching water and bathing in the lake before the tragedy.

“After almost two weeks of search only his hand was found and we buried it but since then the government has gone silent on compensation," Kiplagat said.

Sadly the late Kemboi's grandfather, Charles Chelagat, was also attacked and killed by a hippo in 1993.

The recent incident is for a 13-year-old girl, Cherop Samut, who was attacked by a crocodile in Lake Baringo near Loruk shores in August last year.

She was accompanied by two of her age mates and was washing their clothes and bathing before the 3 pm incident.

The two young girls struggled to rescue their attacked friend but the beast became too heavy and tactical.

Samut's mother Toyoi Lokodong has been camping in the lake hoping one day the wind can blow out some body parts belonging to her daughter.

Unfortunately, it turned out to be a double tragedy as the family lost their 3-year-old child to acute malnutrition.

It was only until January this year when two similar, triangular, human-like shoulder blades (scapula) were spotted on the shore.

They are still under medical and police investigation to ascertain if they belong to the missing girl.

Douglas Keitany, 42,  was overturned and attacked by a crocodile while fishing at Lake 94 in July last year.

“After several days of search, only his leg skeleton from the knee downwards was found and buried,” a resident Benard Ole' Lelebo said on Sunday.

Chepsergon said the rampant attack cases happen along the shores of the lake around Komolion, Kampi ya Samaki, Loru, Ilchamus and Island camp.

“No secure place because Lake Baringo has flooded pushing the crocodiles and hippos closer to people's houses, schools and farms,” he said.

He, therefore, appealed to the government to move faster to compensate the victims and put in measures to curb or minimise the regular attacks.

“If possible there is a need for the government to locate a local or international market to dispose of the massively breeding dangerous crocodiles,” Chepsergon said.

He said a crocodile lays and hatches up to 60 eggs per year.

“Instead of people living away from these dangerous animals, some have build houses near conservation or protected areas exposing their lives to danger,” Cheruiyot said.

He, therefore, said the government compensates victims genuinely upon prior investigations and provision of sufficient evidence of the occurrences.

In June last year, Tourism Cabinet Secretary Najib Balala commissioned the payout at Kampi ya Samaki in Baringo saying the payments would clear a backlog of claims lodged between 2014 and 2021.

“We have further allocated Sh600 million for compensation in the financial year 2021-2022,” Balala said.

The CS, however, decried the low allocation saying it was not adequate and the stakeholders should think outside the box to cater for the claims which currently stood at Sh3.1 billion.

Number of illegal fishermen also declining, thanks to Coast Guard.
Counties
4 months ago

The hippo overturned the boat in which Osano was using during the fishing expedition.
Counties
5 months ago

There is fear and panic as locals fear attacks by the aggressive animals
Counties
8 months ago
“WATCH: The latest videos from the Star”
by JOSEPH KANGOGO Correspondent, Baringo
Counties
19 June 2022 - 22:00