• Oparanya said that the team had been slowed down by the raging Covid-19 pandemic.

• He said those accusing them of failing to push for projects to benefit the community were simply playing politics. 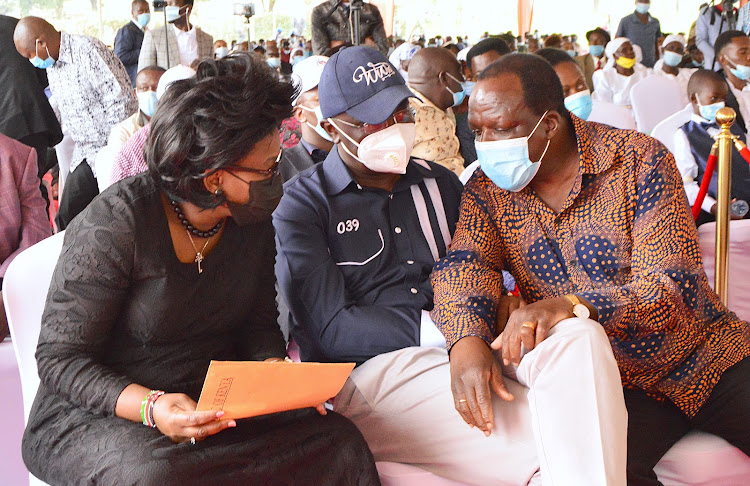 Kakamega Governor Wycliffe Oparanya has defended the performance of the Luhya spokesmen who were named in May last year to spearhead development in the Western region.

He said those accusing them of failing to push for projects to benefit the community were simply playing politics.

Oparanya said the team pushed for the resumption of several projects that had stalled and the launch of new ones, although this had been slowed down by the Covid-19 pandemic.

He said among the projects the team pushed to have restarted included the Lurambi-Nambacha-Musikoma, Ibokolo-Shianda-Nambacha roads and rehabilitation of Kakamega and Kitale airstrips.

He said the team had also lobbied for the tarmacking of new roads, including Jamindas-Akatsa and Lunza-Ikolomani.

He said that the construction of the gold processing factory in Kakamega and the granite factory in Vihiga were at the tender award stages.

"There are so many other projects we've pushed for, but it's only that we cannot go to the public to tell them what we have done because of the Covid-19 protocols," he told the Star on the phone.

The spokesmen were appointed by a section of elected leaders from Western during a meeting at the home of Cotu secretary general Francis Atwoli in Kajiado county on May 31 last year.

Lugari MP Ayub Savula on Monday said the team had failed to use its proximity to power to push for development in Western.

He challenged the three to show what they had achieved since their appointment.

Oparanya told ANC to leave him alone and concentrate on their political activities.

He said he has a right of association and his talks with DP William Ruto should not give them sleepless nights.

"I have met Mudavadi (Musalia) at Palacina hotel and also met Kalonzo Musyoka of Wiper. Why is nobody talking about these other meetings? Why is the meeting with Ruto raising concerns?" Oparanya asked.

Oparanya said he has been meeting top politicians in the country because he is interested in national leadership.

"You cannot aspire to be a national leader and then you don't want to talk to other leaders to hear what they are thinking about," he said.