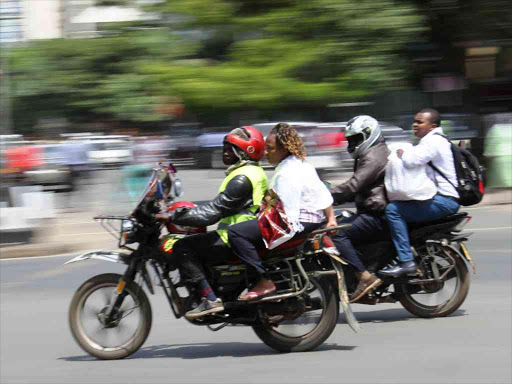 Boda boda operators ferry their customers along Kenyatta Avenue on February 21, 2017. Nairobi County Governor ordered the unconditional release of all the boda bodas currently impounded at City Hall at no cost and stated that going forward, all operators will be bound by all the county by laws and traffic rules. Photo/Jack Owuor

Newly-registered motorcycles nearly doubled in the 10 months to October signaling increased popularity of the two-wheel taxi.

Official data by the Kenya National Bureau of Statistics shows new motorcycle registries for the 10-month period rose to 159,260 units compared to 85,073 units registered during the same period in 2016.

Data by the state statistician also shows that, in October, 9,438 motorcycles popularly known as boda bodas were registered. The lowest reported number over a 12-month period. New motorcycle registrations began to fall in August on the onset of the General Election campaign period.

The number of boda boda purchases had been on a constant rise after government made them cheaper with the scrapping of the Sh10,000 excise duty per unit in September 2016.

KNBS data now shows bikes have in the past two years constituted more than half of the total number of vehicles registered.

The total number of vehicles registered during the review period increased by 48.71 per cent.

Although boda bodas have been picked up both in the rural and urban areas for their ability to beat traffic and access impassable areas, there have been fears that the taxis have increased road traffic accidents.

Data collated by the National Transport and Safety Authority between January 1 and December 28, 2017, shows motorcycle crash victims were 1,177 people, 10.64 per cent of all road accident victims.

Motorcycle accidents result in both human and economic loss. Some 490 deaths and 539 serious injuries were reported while 148 suffered minor injuries.

In 2016 there were about 11,062 road accident casualties, 14.93 per cent less than 13,003 victims reported last year meaning the authority surpassed its performance target of reducing road traffic crashes by 10 per cent.

Towards the end of last year Moi Referral hospital CEO Wilson Aruasa told the Star that NTSA should focus on how to curb boda boda accidents adding that the transport authority must embark on training of the riders to ensure they qualify to transport passengers and adhere to traffic regulations.

“So far we are happy with the measures they have taken to deal with accidents on our roads, but there should be a focus on the boda-boda operations involved in passenger transport,” he said commenting on increased road carnage during the festive season.