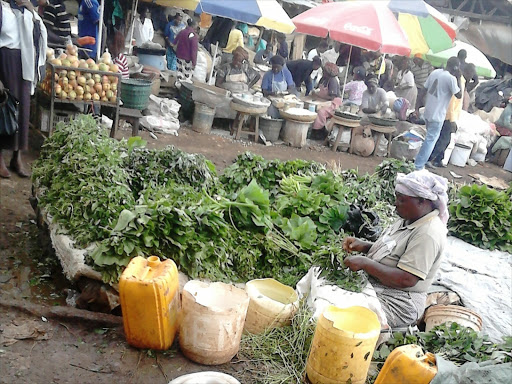 Traders at the main market in Eldoret on Saturday

Fresh produce markets in the North Rift are experiencing an oversupply of farm produce especially vegetables and fruits after the heavy rains that have been witnessed in most counties in the region.

This has led to a drop in prices which has benefited consumers.

"Generally we have seen a price drop of about 30 per cent due to the increased supply,” he said.

He said a piece of cabbage sold at an average of Sh50 a month ago is now down to Sh30 while mangoes are going for Sh10 each down from Sh20.

The increased supply is expected to continue untill early next year when the rains and forecast to decline.

“We have been experiencing heavy rains but not to the level we had been told and that is a blessing,” said Ben Kiptoo who is a fruits farmers in Elgeyo Marakwet.

Charles Owino from the Commodities Monitoring Group said their survey showed an increase in the production of alternative crops in most areas.

“The food situation will remain stable into the new year and consumers will enjoy reduced prices,” he said.