Inflation to drop below 7.5% by end of March - CBK 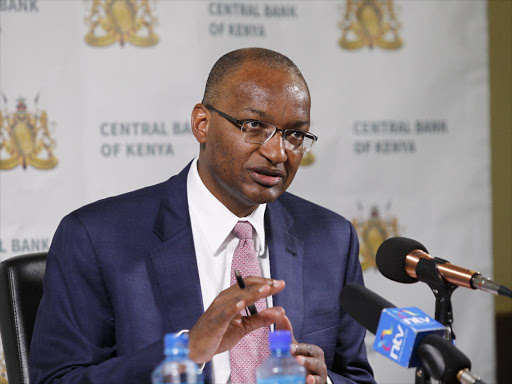 The Central Bank of Kenya (CBK) is confident that the current high cost of living will ease by March.

Speaking at the the World Economic Forum in Davos, Switzerland, CBK governor Patrick Njoroge said inflation will fall within its target range of 7.5 in the first quarter of 2023 on sound monetary measures taken.

"We are not comfortable with where it is now, but are comfortable that it's coming down, and we expect it to be in our target range sometime this quarter," Njoroge said on the sidelines of the annual WEF meeting.

Kenya's inflation in December dipped to 9.1 per cent, still above the bank's target range of 2.5 per cent to 7.5 per cent.

Kenya, just like other economies globally hiked base lending rate three times in 2022 to slowdown the rising inflation.

This was the third time it was raising the anchor rate, after pushing it from 7.5 per cent to 8.25 per cent in September.

In May, the MPC raised the anchor rate by 50 basis points to 7.50 after retaining it since April 2020 to provide an accommodative stance to the economy which suffered disruptions from the Covid-19 pandemic.

Besides the tough monetary stance, CBK is also counting on easing food and global oil prices to ease the high cost of living.

"The prospects are good for various reasons, including that the price of oil has been coming down," Njoroge told Reuters on Friday.

While agreeing with CBK inflation prospects, economist Philip Mbae says that the softening will be highly dependent on happenings in the global market and rainfall pattern.

''Inflation has started to ease in various parts of the world including UK and the US where it rose to 40-year high. The monetary measures taken have worked but that alone is not sustainable,''Mbae told the Star.

He is for instance worried that the depreciating shilling is harmful to importers who are forced to bill consumers.

On Friday, the shilling hit a new low of 124.05 against the greenback, compared to 123.78 per dollar the previous week.

It has slipped 0.54 per cent against the U.S. dollar this year after falling over nine per cent in 2022.

Even so, the bank is not worried about depreciation and expects more external financing to support the government budget.

It is also comfortable with the current state and projections for its foreign exchange reserves after slipping below the required four months worth of import cover last November.

This meets the CBK’s statutory requirement to endeavour to maintain at least four months of import cover.

With that in mind, the bank expects the Kenyan economy to grow 6.2per cent this year, Njoroge said, and does not expect a potential global recession to be "unmanageable".

That compares to earlier forecasts of six per cent, and above the World's Bank prediction that East Africa's largest economy would slow to five per cent growth from 5.5 per cent in 2022.

Gloomy outlook for Kenya as interest rates projected to rise

Kenyans are staring at tough economic times and expensive household budgets after the shilling hit a historic low against the dollar to trade at ...
Business
2 weeks ago

Kenya's economy projected to pick up by March

Growth slowed sharply from October, partly due to strike action.
News
3 weeks ago

Tougher times for households as shilling falls further to the dollar

Cost of goods to go up with consumers paying the price.
Business
3 weeks ago
Post a comment
WATCH: The latest videos from the Star
by VICTOR AMADALA Business Writer
Kenya
23 January 2023 - 04:00
Read The E-Paper