Five vessels to dock at Mombasa port with fertiliser

•The government in December said it was working with the private sector to import 300,000 tonnes for the next planting season.

•This is during the March-April-May long rains seasons. 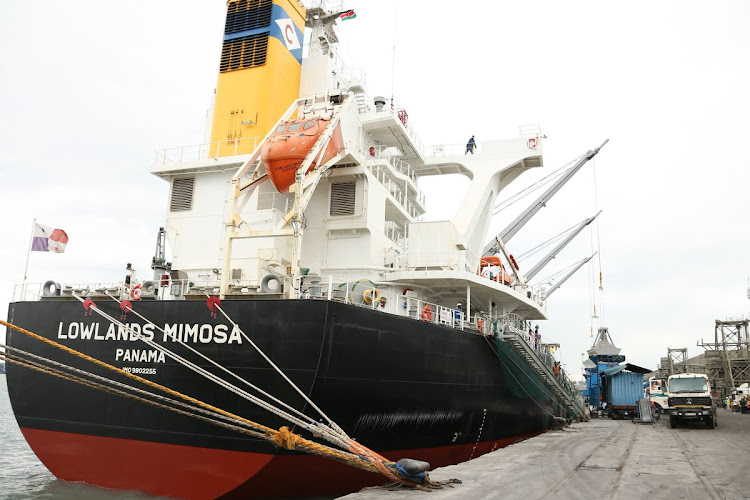 A vessel offloads fertiliser at the Port of Mombasa/FILE
Image: COURTESY

At least five bulk carriers are expected to dock at the Port of Mombasa between Sunday and February 1, bringing in about 136,446 metric tonnes of fertiliser.

This comes as the government moves to actualise its pledge of avail more subsidised fertiliser to farmers, as part of its strategy to bring down food prices.

During his Jamhuri Day address to the nation on December 12, at Nyayo national stadium, President William Ruto said the government was working with the private sector to import 300,000 tonnes of the key farm input for the next planting season.

This is during the March-April-May long rains seasons.

According to Ruto, this is part of the wider plan by his administration to ensure the cost of living in the country is brought down and ensure Kenyans access food at cheaper costs.

The first of the five ships is expected to dock at the Port of Mombasa on Sunday, bringing in at least 13,400 tonnes.

Two vessels are expected on January 26, with one offloading at Grainbulk Handlers Limited’s facility.

Another two are expected on January 29 and February 1, with consignments being brought in by both the government and private importers.

Among beneficiaries are smallholder tea farmers affiliated to KTDA which last year ordered a total of 88,000 metric tonnes, equivalent to 1.76 million bags of 50kgs of the NPK 26:5:5 chemically compounded fertiliser procured from Russia.

This was to be delivered in two consignments with the first coming in last month.

The fertiliser has been imported in a challenging logistical environment occasioned by the Russia Ukraine war and we are grateful to the government for the helping in us smoothening the process,” KTDA Holdings chairman David Ichoho said.

Most of fertiliser imports have always come from Russia.

The current war in the region has had an effect on the arrival of the second consignment.

With the subsidised prices, farmers have been accessing the input at Sh3,500 for a 50kg bag, down from Sh5,617.

The value of fertiliser purchased increased by 26.4 per cent to Sh20.5 billion in 2021, the Economic Survey by the Kenya National Bureau of Statistics (KNBS) indicates.

Aflatoxin levels shall not exceed ten (10) parts per billion and imports shall be accompanied by a certificate of conformity issued by the Kenya Bureau of Standards.

The government plans to import at least 10 million bags of maize and other assorted food materials as a stop-gap measure.

Price of fertiliser to go down further in January- Ruto

Some 400,000 metric tonnes of fertiliser expected in the country early next year
News
1 month ago

Two million bags, he said, have already arrived in the country.
News
1 month ago
Post a comment
WATCH: The latest videos from the Star
by MARTIN MWITA Business Writer
Kenya
20 January 2023 - 04:00
Read The E-Paper