Talks may overrun into the weekend.

•The Egyptian hosts are trying to broker an agreement among almost 200 countries after two weeks of negotiations.

•The big sticking point here is the need for a new fund to help countries deal with the immediate impacts of climate change. 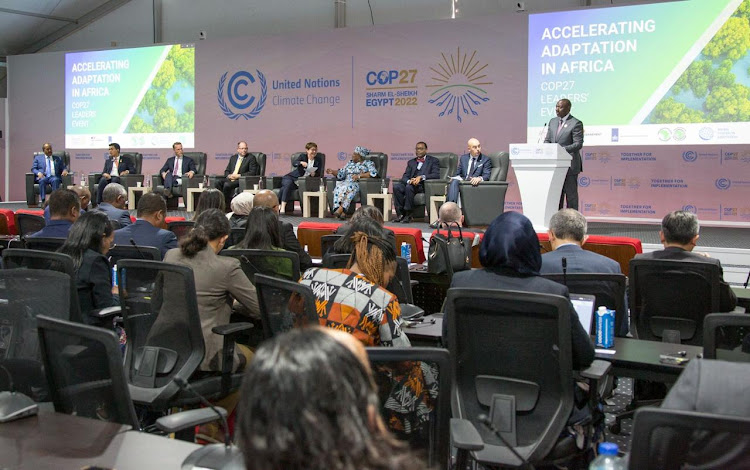 UN climate talks head to a conclusion on Friday with nations deeply divided over cash to help poor countries cope with the impacts of climate change.

The idea of phasing down the use of all fossil fuels to limit the rise in temperatures is also the subject of a deep rift as the COP27 talks wind up.

The Egyptian hosts are trying to broker an agreement among almost 200 countries after two weeks of negotiations.

But such is the scale of division the talks may overrun into the weekend.

There's a real sense of urgency in the Red Sea resort of Sharm el-Sheikh as negotiating teams try to conclude agreement on a range of complex questions.

The Egyptian presidency has presented a draft document that sums up the positions of the different countries.

Here's a breakdown of the major areas of disagreement.

The big sticking point here is the need for a new fund to help countries deal with the immediate impacts of climate change.

The issue is known as "loss and damage" in the framework of UN talks. Rich countries have resisted this discussion for 30 years, fearing that since they played a major role in causing climate change, they will have to pay for it for centuries to come.

But the impacts of flooding in Pakistan, Nigeria and elsewhere in recent years have tipped the balance - here in Egypt the issue of the losses and damages due to rising temperatures has finally made it onto the negotiating agenda.

One of those taking part in the discussions is Tuvalu's minister for finance Seve Paeniu.

"People are now going without water, they are being rationed to two or three buckets of water a day," he told BBC News.

Drought is hitting the island hard, while at the same time the rising seas are threatening their future as a nation.

Developing countries like Tuvalu want a new financing facility to be established here in Egypt. The US is not in favour. Along with the EU, they favour a "mosaic" of financial arrangements, not a new dedicated fund.

The conversations continue to be very difficult. But there are small signs of light. The EU has said it will pay €100m to help damaged countries right now. Developing countries have also extended an olive branch.

"For those countries that are that are worried or anxious about liabilities and judicial proceedings, I think we can work around all those anxieties," said Sherry Rehman, Pakistan's climate minister, who chairs an important group of emerging economies at these talks.

Phasing out all fossil fuels

The final discussions at COP26 in Glasgow last year almost fell apart on the issue of coal.

Richer countries wanted to phase out the use of the most polluting fossil fuel.

Larger developing economies including India and China did not.

Cue frantic huddles on the plenary floor as diplomats tried to find a compromise.

They settled on "phasing down" rather than "phasing out".

Here, India and a number of other countries wanted to expand this phrase to include oil and gas.

However, the draft document published on Thursday did nothing more than restate the Glasgow formula.

Many countries, rich and poor, were disappointed - and are pushing for the wider range of fuels to be included.

"This is supposed to be an implementation COP and that means when it comes to climate change, addressing the transition away from fossil fuels and toward renewable energy," said Catherine Abreu from the Destination Zero campaign group.

"So they should be having that debate at the global scale in these halls."

This was the mantra of the UK Presidency of COP26, and after Glasgow the concept was on life support, according to Alok Sharma, the minister in charge of the talks.

A rise of 1.5C is viewed by scientists as the threshold to very dangerous levels of warming - but there has been considerable worry here that the commitment to the idea would be watered down, especially as India and China were concerned it was no longer scientifically feasible.

Indeed the draft text published by Egypt is seen as a step back to the language of the Paris agreement, where the world would aim to keep the rise in global temperature "well below" 2C and to make best efforts to keep it under 1.5C.

"I see the will to keep to the 1.5C goal," said UN Secretary General Antonio Guterres as he returned to the talks.

"But we must ensure that commitment is evident in the COP27 outcome."

While the recent meeting between Presidents Biden and Xi Jinping has seen some thawing of relations between the world's two biggest emitters, the lack of concrete areas of co-operation between them is hampering the UN climate process.

A key example is "loss and damage" and climate finance more generally. Traditionally, the developed nations paid and the larger emerging economies, such as India, China and Brazil did not.

Now the US and EU want to expand the number of countries that contribute - and China is top of their list.

"By the end of this decade, China could overtake the US in terms of its historical cumulative emissions, and is the world's second largest economy, and yet in UN terms it still counts as a developing country," said Bernice Lee, from Chatham House.

"But the US has consistently failed to deliver climate finance and shoulder its responsibility as the world's largest emitter to support the the developing world.

"If China and the US can come to terms, a whole new solution space opens up for the rest of the world."

They cite lack of progress on climate finance, adaptation and loss and damage
News
1 week ago
Post a comment
WATCH: The latest videos from the Star
by BBC
Kenya
18 November 2022 - 12:00
Read The E-Paper