How India is building a pearl farming industry

This is part of its Blue Revolution.

•The Indian government is keen to modernise the nation's fishing industry.

•Under the scheme, the government pays for half the cost of setting up a pond for pearl fishing. 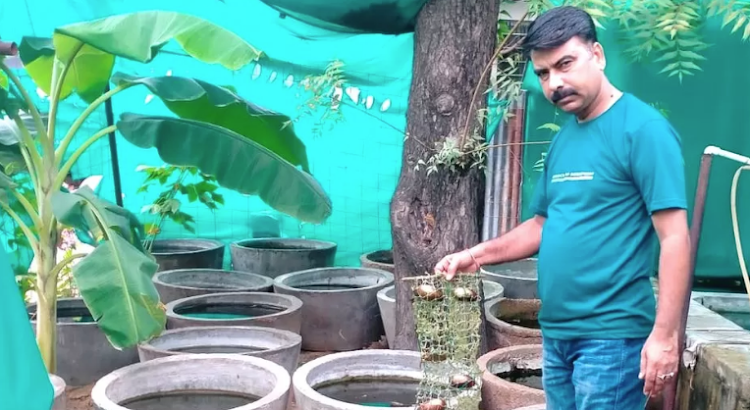 In 2016 Narendra Garwa was facing a desperate financial situation. His small book store in the village of Renwal, Rajasthan, was running at a loss.

With a family to support and little education, he searched the internet for other money-making ideas. He had some success growing vegetables in plastic bottles, but then came across a potentially more profitable crop - pearls.

"Rajasthan is a dry area with water issues. It was a challenge to think of growing pearls with limited water but I decided to try," he says.

Pearls are formed when a mollusc reacts to an irritant in its protective membrane. The mollusc deposits layers of aragonite and conchiolin, which together form nacre, also know as mother-of-pearl.

In the wild, pearl formation is rare so most pearls sold these days are from farmed molluscs, usually oysters or freshwater mussels.

To spur the mollusc to form a pearl, an irritant is artificially introduced into the creature.

However, it is a delicate process and the mussels or oysters must be carefully handled, as Mr Garwa found.

"My first attempt was a disaster," he admits. Of the 500 mussels he purchased, only 35 survived.

In addition, Mr Garwa had dug a 10ft by 10ft pound in his back garden to keep the creatures in.

Despite the setback, he did not give up. Instead, he took a five-day course in pearl farming.

"Growing an oyster is like bringing up a baby," he says.

"Monitoring the the water throughout the growth period is crucial to achieving high quality and volume of produce."

Now he has a 40ft by 50ft pond, which he treats with multivitamins and alum which maintains the correct pH level required for growth.

The Indian government has been encouraging pearl fishing as part of its Blue Revolution, a plan to modernise the nation's fishing industry.

Under the scheme the government pays for half the cost of setting up a pond for pearl fishing, and so far the Department for Fisheries has given financial support to 232 pearl farming ponds.

"Pearl farming is one of the most lucrative aquaculture businesses and the government is encouraging farmers to take up this farming," says Jujjavarapu Balaji, Joint Secretary of Marine Fisheries.

Not everyone is impressed with this wave of pearl farming activity. Critics include Gunjan Shah, who is the fifth generation of his family to be in the pearl trading business.

"The culture of pearl farming has increased in India but I think the pearls grown in every nook and corner are not of very good quality" says the owner of Babla Enterprises, based in Mumbai.

He says India is producing too many of the wrong kind of pearls.

"What India needs at present is people who can grow sea water pearls if we want to compete with China. Indian oysters are small but China has hybrid oysters which produce large pearls.

"Cultured South Sea pearls are the most valuable type of cultured pearl on the market today. These pearls come in a gorgeous variety of sizes, shapes and colours. A strand of South Sea pearls can be as expensive as $10,000 (£8,500) or more. They are very rarely produced in India."

He says the government should be looking to develop this part of the industry.

In its defence, the government says it will take time to build up a competitive pearl farming sector.

"Pearl family is specialised farming, so this sector will take time to grow. The plan is to see the increase in the next three years," says Mr Balaji, from the Department for Fisheries.

"Once we are able to grow enough pearls for local consumption then we can focus on exports," he adds.

As for Mr Garwa, as well as farming pearls, he also offers courses for those who want to learn how to do it.

Reena Choudary, 28, was one of his students, and just like her tutor her first effort last year was a failure.

"I lost all the oysters - none of them were able to produce," she says.

But this year, she expects to produce around 1,000 pearls.

Starting an independent business was a big leap for her, particularly as women in her region are often expected to look after the home rather than work.

"For people like us this smells like freedom," she says. "We have learnt how we can be independent, help towards contributing to the family and have a say in family matters."

WATCH: The biggest news in African Business
Post a comment
WATCH: The latest videos from the Star
by BBC NEWS None
Kenya
12 September 2022 - 04:00
Read The E-Paper