Providers have been impounding the machines from clients who are unable to meet deadlines.

•Government statistics indicate that nearly 17,000 motorcycles are registered each month.

• Statistics show that it provides more than one million direct jobs for riders who earn roughly less than $10 (Sh1,000) a day 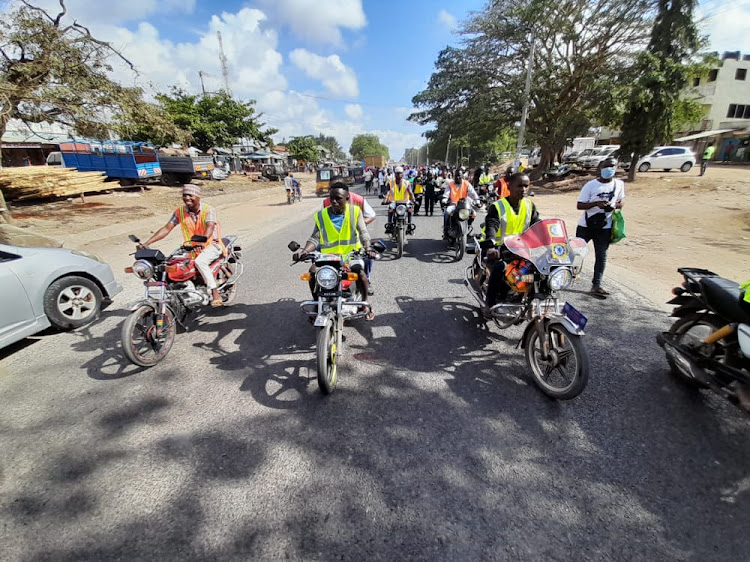 ENERGETIC: Boda boda operators participate in a peace walk along the Ukunda-Lunga-Lunga highway in Kwale in April, 2022.
Image: SHABAN OMAR

On June 25, a visibly shaken and dejected Peter Musyoki rushed to the office of a popular MP in Nairobi seeking urgent assistance.

The middle-aged man appeared worn out and frail after traveling several miles to the MP's office. He was hot under the collar.

Upon being ushered in, Musyoki introduced himself to the legislator and made his business known.

“Kindly assist me, sir. My motorcycle has been confiscated and it's my only source of income,” the man said in a frantic last-ditch effort to save his bike from a possible auction.

According to the documents in his possession, Musyoki acquired the machine through a savings and credit cooperative organisation.

His business had not done well of late and he found it difficult to update his records.

“Things turned nasty after I paid school fees for my children. I was left broke and I couldn't raise the amount required to offset my debts,” he said.

Incidentally, Musyoki is not alone in his woes. Providers have been impounding the machines from clients who are unable to meet deadlines.

He is among the growing number of Kenyans paying colossal loans through the nose after resorting to the boda boda business for survival.

According to 2018 official data, at least 1.4 million motorcycles are registered in Kenya, the majority of which are used as boda bodas.

Government statistics indicate that nearly 17,000 motorcycles are registered each month.

However, the figures could be much higher given some transactions are not captured in the records due to the sector's poor regulation.

The sector’s economic contribution is immense and cannot simply be wished away.

Recent statistics show that it provides more than one million direct jobs for riders who earn roughly less than US$10 a day.

The National Treasury is estimated to be collecting roughly Sh60 billion yearly in fuel taxes from boda bodas.

Each consumes an average of Sh300 worth of petrol each day. Despite these glaring facts, Musyoki feels the government has left boda boda operators to their own devices.

Other than the machines being impounded by rogue cartels, a wide array of challenges loom somewhere in the air.

“Kenya’s road network lacks lanes to protect bikers. Motorcyclists and cyclists should be considered each time authorities are designing urban roads. Counties could designate zones of operation for boda bodas.”

While admitting that the sector is also infested with rogue operators who take advantage to reign terror on unsuspecting clients, Musyoki strongly feels there is a need to adopt a comprehensive framework to regulate the public transport sector.

For instance, operators were recently left counting huge losses after some bikers molested a young woman along Uhuru Highway, leading to a countrywide government crackdown at the orders of President Uhuru Kenyatta.

“It is prudent that the government adopts both short and long-term measures to address the chaos in the boda boda sector,” Musyoki said.

“Keeping the database of all boda boda operators in Kenya through mandatory registration is also key to improving the sector. This will ensure compliance.”

A rider who was attacked and robbed was able to track and recover the motorbike.
News
1 month ago

They say motorcycle users are at a greater risk than other road users during accidents.
News
1 month ago

1,000 Kirinyaga riders to be trained in road safety