Goodyear is working on a maintenance-free tyre 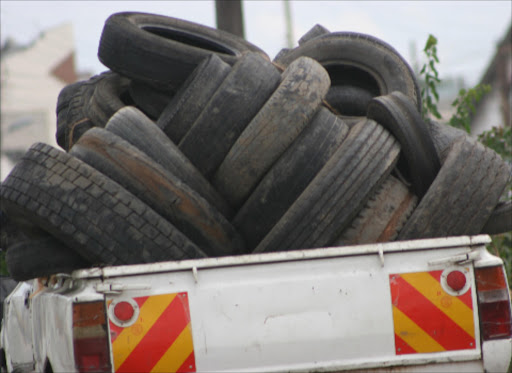 The sight of a car limping along on a near-flat tyre, or a roadside wheel change is still common.

So is the expense of replacing tyres that have worn out prematurely, perhaps because the driver may not have been checking the pressure as regularly as they should.

Sometimes it's difficult not to feel tyres are a car's weak link. But is this about to change?

Is it the end of the black rubber air-filled doughnut first used on vehicles in the 1890s - a product designed to be indestructible, and therefore not easy to recycle?

On a test track in Luxembourg, a Tesla Model 3 is twisting through tight corners, accelerating rapidly, and doing emergency stops. Standard stuff. What's remarkable, though, is the car is sitting on four airless tyres - made by Goodyear, the US manufacturer.

Special plastic spokes, support a thin, reinforced rubber tread. The spokes flex and contort as the car goes through its paces.

Michael Rachita, Goodyear's senior program manager for non-pneumatic tyres (NPTs), is upfront about the limitations: "There will be noise, and some vibration. We're still learning how to soften the ride. But we think you'll be surprised at the performance." He wasn't wrong.

Car sharing and ride-hailing, rather than ownership, are rising in cities. A car with a flat tyre, is a car not making money.

Rachita says: "While air-filled tyres will always have their place, a mixture of solutions is needed. As we move into a world where autonomous vehicles are becoming more common and many cities are offering transport-as-a-service strategies, having a maintenance-free tyre is hugely important."

At Goodyear's labs, the tyres are tested for 24 hours at a time, under different loads and speeds. That's thousands of miles non-stop. Some spokes deform, some break, but the structures continue to perform safely, Rachita says. "It's test-learn, test-learn," he says. "But we're at a stage that's given us a huge amount of confidence. This is the real deal."

Goodyear rival, Michelin, has been working with General Motors (GM) on airless tyres since 2019. In February there were media reports that Michelin's Unique Puncture-proof Tire System (Uptis) could debut on a new Chevrolet Bolt electric car being planned by GM, possibly as early as 2024.

Uptis tyres are made of high-strength resin embedded with fiberglass and composite rubber (for which Michelin has filed 50 patents) to create a mesh structure that surrounds an aluminium wheel.

Cyrille Roget, a scientific and innovation expert at the French tyre maker, won't confirm the Bolt reports, but tells the BBC Michelin will have more to say later this year.

Michelin has been a market leader in airless wheels. Its Tweel (tyre-wheel) has been around since 2005 and is used on slow-moving vehicles, such as farm equipment.

Optimising the technology for road vehicles is, however, a totally different challenge, Roget says: "We have 130 years of experience and knowledge in perfecting inflatable structures like pneumatic tyres. Airless technology is very recent."

Uptis, though, is just a step to something bigger. The company that gave us the pumped-up Michelin Man logo, has a multi-year plan, to create a tyre that is airless, connected, 3D-printed and made entirely of materials that can be melted down and re-used.

Apart from occasional re-treads, it would be zero-maintenance, according to Michelin.

Heavy battery weight means airless structures are particularly suited to electric vehicles. "You can carry more load with a more compliant feel than in an air tyre," Rachita says.

On the other hand, airless tyres have a greater contact patch with the road, increasing the drag. This rolling resistance uses more energy to drive the tyres forward - with implications for battery life and range.

And then there's noise - the hum of rubber-on-road.

In addition, the rigidity of plastic spokes transmits more vibration through the suspension. Drivers long used to the response and performance of air tyres could take some convincing, he feels.

More important than consumer perception, however, is what regulators decide.

Governments will demand rigorous safety tests and a standardisation of rules. And tyre makers will need to invest heavily in new manufacturing facilities and develop supply chains. It will take years.

The South Korean company unveiled the latest version of its i-Flex NPT in January. Smaller than a conventional tyre, a honeycomb of interlocking polyurethane spokes is a breakthrough in coping with lateral and horizontal stresses, the company says.

Bridgestone, the world's largest tyre maker, is interested in industrial applications in farming, mining and construction, where demand could be high from customers that see a costly loss of productivity when tyres fail.

Airless tyres will, initially at least, carry a premium price. But the ability for regular re-treading and 3D printing could be a game-changer. Maybe, some experts speculate, consumers won't even need to buy tyres outright. Instead, they'll get them free and pay-per-mile, with sensors monitoring usage.

It's an illustration of where the technology is taking the tyre of the future, says Sosia Causeret Josten, an analyst at Goodyear's Sightline Tyre Intelligence division. As the only contact between the road and the vehicle, tyres offer huge potential.

Perhaps, thanks to cloud computing and algorithms, connected vehicles could deliver information about where government authorities need to make road repairs or lay grit during freezing weather.

Take another example, automatic braking systems. "If the anti-lock braking system (ABS) can tell that the vehicle is driving on half-worn summer tyres, it can react quicker. This advantage can play an important role in an autonomous future, where the vehicle has to react itself," she says.

Continental is developing a self-inflating system where pumps and sensors in the wheel keep the pressure at optimum levels.

Like all manufacturers, the company is looking into "greener" products. Polyester from recycled plastic bottles will soon be used in its premium tyres, and both Continental and Goodyear are researching a dandelion flower that produces latex similar to rubber trees.

But sustainable alternatives to conventional materials are available only "to a limited extent,"Sperl adds. Air tyres have been around so long for a reason - they do the best job. "We remain convinced of this," she says.

K'ACHOLA: We can build industries and fight warming

Did you know that a single tree can earn you and your generations to come a fortune if not a lifeline?
Opinion
1 week ago
by BBC NEWS None
Kenya
15 June 2022 - 21:00