growth expected at above 5%. 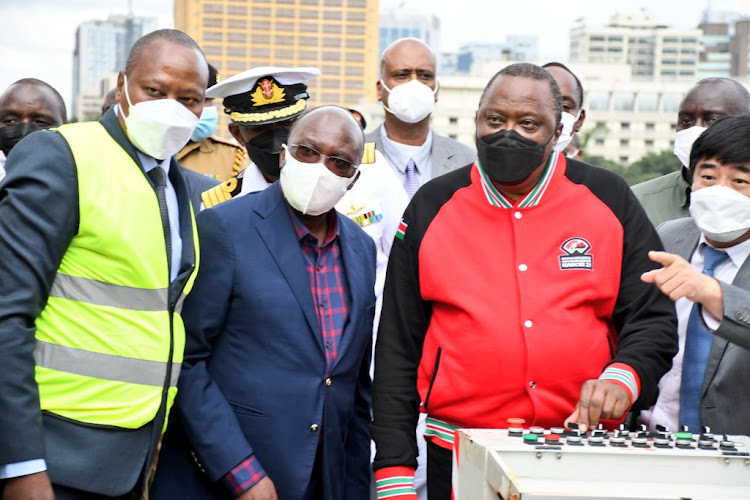 Transport CS James Macharia and President Uhuru Kenyatta during an inspection of the Nairobi Expressway project on December 23, 2021
Image: KENHA

Jobs created in Kenya in the last one year will be among main focus areas as government releases the Economic Survey 2022, with growth expected to be above five per cent.

This could go up to above six per cent.

This is after a poor run in 2020, where more than 740,000 jobs were lost in Kenya on the impact of the Covid-19 pandemic on the economy, the Economic Survey 2021 by the Kenya National Bureau of Statistics(KNBS), released last September, indicates.

According to the survey, total employment outside small-scale agriculture and pastoralist activities contracted by 4.1 per cent to 17.4 million in 2020.

About 83 per cent of recorded employment in 2020 was in the informal sector while 2.9 million jobs were reported in the formal sector in 2020.

Informal sector employment is estimated to have contracted to 14.5 million jobs compared to 15.1 million jobs in 2019.

The 2022 survey being released by National Treasury CS Ukur Yatani today is however expected to paint a better picture with both the government and key institutions having projected a rebound on economic growth .

Cumulatively 5.1 million new jobs in both formal and informal sectors are said to have been created last year, with final figures expected out today.The Central Bank of Kenya(CBK) had projected a strong rebound this year, driven mainly by the agriculture, manufacturing and service sectors

“The rebound assumes that economic activity will normalize due to a full reopening of the economy, the Economic Recovery Strategy being successfully implemented, and Kenya capitalizing on an expected improvement in external liquidity and benefiting from initiatives to meet its external financing needs,” AfDB notes.

The external initiatives could include debt refinancing, restructuring and debt service relief, and additional concessional loans.

IMF has had the highest projection of 6.3 per cent noting Kenya showed remarkable resilience to the Covid shock in 2020, and has been staging an economic recovery.

However, uncertainty and pandemic-related pressures will persist until vaccinations become widely available, it had said earlier.

World Bank on the other hand expects the economy to have grown by five per cent.

“Kenya’s economy has demonstrated resilience to the Covid shock, with output in the first half of the year rising above pre-pandemic levels. In 2021 as a whole, gross domestic product (GDP) is expected to grow by 5%, one of the faster recoveries among Sub-Saharan African countries,” it notes.

According to the 24th edition of the Kenya Economic Update, “From Recovery to Better Jobs,” growth has been supported by rebounds in industry and, especially, services.

Agricultural output, however, fell by 0.5 per cent year-on-year in the first half of 2021 following a particularly strong performance in 2020, partly due to below-average rains.

Demand-side recovery has been supported by a revival in private consumption, against a backdrop of improving employment conditions and household incomes.

“Kenya’s economy has shown considerable resilience to the enormous shock of the pandemic, and this year is expected to post one of the stronger growth rebounds in the region thanks to diversified sources of growth and sound economic policies and management,” said Keith Hansen, World Bank Country Director for Kenya.

However, poverty has increased, and the buffers and coping mechanisms of households, firms, and the public finances have been depleted, Hansen noted.

In the first three months of the pandemic, more than 1.7 million Kenyans had lost their jobs according to KNBS data.

Tourism was the hardest hit during the pandemic where more than 1.2 million full-time jobs were lost  last year, a report by the Tourism  Research Institute indicates.

Other reports to be launched today include the Gross County Product (GCP), Census of Commercial Farms, the Analytical Reports from the 2019 Population and Housing Census (Monographs), and the Kenya Statistical Quality Assurance Framework (KeSQAF).

Last year, KNBS delayed to release the annual survey by about four months, blamed on the pandemic which led to late submission of required data for compilation.

Following the easing of Covid-19 restrictions, reopening of the economy as well as targeted stimulus interventions by the government, the economy registered strong recovery of 9.9 percent in the third quarter of 2021.

In 2022, the economy is projected to stabilize at 6.0 percent supported by recovery in agriculture, industry and services sectors.

This is on increased operating costs, elections jitters
Business
4 weeks ago