•Traders continue to use porous borders to evade taxes. 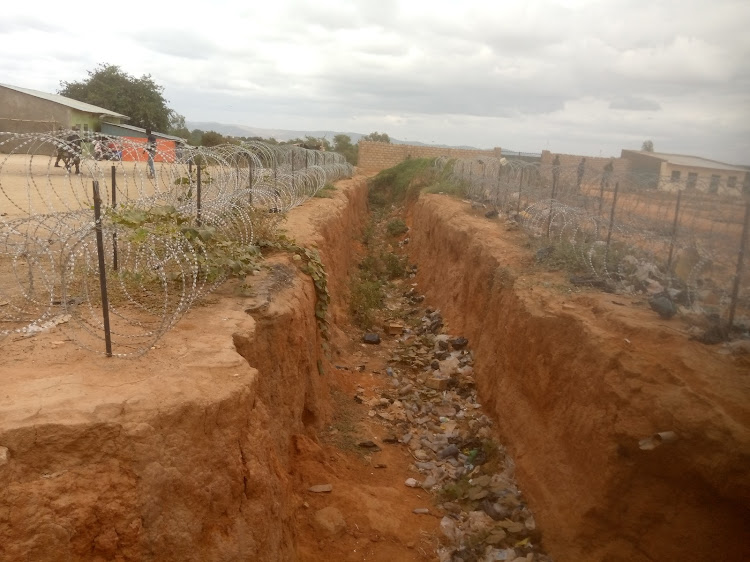 A trench dug to close one of the many porous borders on the Ethiopian-Kenya border
Image: MARTIN MWITA

Kenya Revenue Authority(KRA) has heightened border surveillance to curb smuggling of goods from neighboring countries, it has said.

This, as it targets to address the high potential revenues lost through illicit trade.

Speaking during a media forum on seizure of prohibited and restricted goods at the ports of entry, KRA’s chief manager–Nairobi Customs Stations, Bernard Kibiti said scanning has been heightened at border points.

The authority is also working with other government agencies including the police to enhance border patrols.

“Government agencies, in a multi-agency approach, has heightened surveillance and I can tell you smuggling activities have reduced,” Kibiti said.

Border towns where traders are notorious in dealing with smuggled goods include Isebania(Kenya-Tanzania), Malaba and Busia (Kenya-Uganda) and Moyale(Kenya-Ethiopia).

Tobacco and alcohol products, sugar, milk products, sweets, beverages such as juices, sodas and water are among the most traded.

Illicit trade remains a threat to Kenya’s formal economy where local manufacturers and traders are loosing their market share.

The Vice is however blamed on the high taxation in Kenya which is making local produces more expensive compared to those from the neighbooring countries.

For instance, between 50 and 60 per cent of the cost of alcoholic products in Kenya are taxes, according to the Kenya Association of Manufacturers (KAM).

Currently, a beer in Kenya goes for between Sh180 and Sh300 at most local bars, wines and spirits and nightclubs.

The cost of basic goods such as milk, flour, rice, and bread are on average between Sh20 and Sh50 cheaper in Uganda compared to Kenya.

This has made it attractive with Kenyan traders, mostly those near the borders, dealing in illicit trade.

“Our challenge is that for some of the products, the cost is significantly higher compared to our neighbours,” KAM chief executive Phyllis Wakiaga said, “There is a growth in illicit trade in the country as the cost of products continues to rise.”

The Retail Trade Association of Kenya (Retrak) has also blamed the high illict trade on high cost of doing business among them numerous taxes and an unpredictable business environment.

According to Retrak CEO Wambui Mbarire, the cost of doing business in Kenya has increased tenfold with at least nine new taxes and levies introduced in the current financial year.

This adds to the recent excise inflation adjustment by KRA , based on the average inflation rate for the 2020/2021 financial year of 4.97 per cent.

Products such as fruit and vegetable juices now attract an excise duty of Sh12.17 per litre, up from Sh11.59.

Bottled or similarly packaged waters and other non-alcoholic beverages, not including fruit or vegetable juices, attract a duty of Sh6.03 per litre, up from Sh5.74.

Beer, cider, perry, mead, opaque beer, and mixtures of fermented beverages with non-alcoholic beverages and spirituous beverages of an alcoholic strength not exceeding six per cent, attract excise of Sh121.85 per litre, up from Sh116.08.

The same has been passed to consumers, which has seen some opt for cheaper products, hence the rising demand for illicit goods which are eating into formal traders' marketshare.

“This presents an obvious incentive for smugglers to exploit our porous borders and sell goods bought more cheaply in Uganda to customers in Kenya. While the government has put in place measures to curb illicit trade and tax evasion, the impact on the ground is very minimal,” Mbarire notes.

Retailers call for a step up in the fight against contrabands.
Business
1 month ago