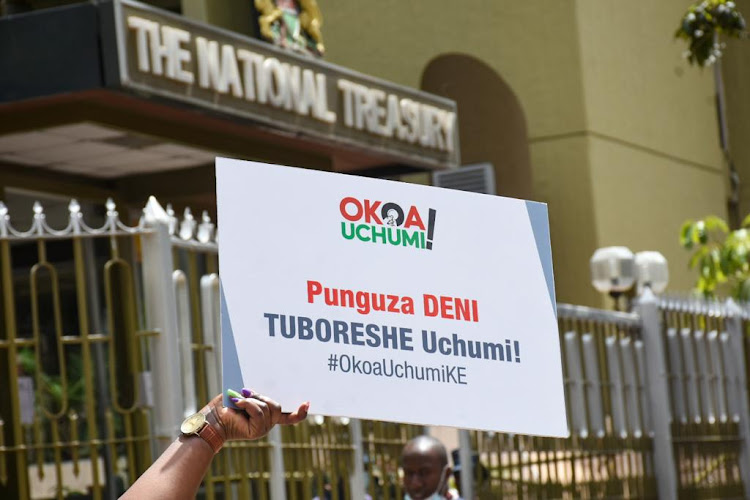 An activist holding a placard at the National Treasury building in Nairobi to mark the World Anti-corruption Day on November 9
Image: MERCY MUMO

The World Bank Group considers corruption a major challenge to its twin goals of ending extreme poverty by 2030 and boosting shared prosperity for the poorest people in developing countries.

According to the lender, Covid-19 is estimated to have pushed an additional 88 million to 115 million people into extreme poverty this year, with the total rising to as many as 150 million by 2021, depending on the severity of the economic contraction.

“Corruption has a disproportionate impact on the poor and most vulnerable, increasing costs and reducing access to services, including health, education and justice,’’ the global lender said in a brief to commemorate global anti-corruption day.

In Kenya, over 7.8 million people are living in extreme poverty, the majority in rural areas. Even so, the country scored low in last year’s corruption index by Transparency International, ranking position 124 out of 180.

According to the Ethics and Anti-Corruption Commission, Kenya is losing an estimated Sh608.0 billion (7.8 per cent of Kenya's GDP) to corruption annually.

The country's tough anti-corruption fight goes hand in hand with its prosperity.
News
1 month ago

Yesterday, the Institute for Social Accountability (TISA) petitioned the National Treasury to account for loans taken both internally and externally, pushing the country’s debt to close to Sh8 trillion or 68.7 per cent of Kenya’s GDP.

World Bank demonstrated the negative effect of corruption on the economy, saying that the vice in the procurement of drugs and medical equipment for instance drives up costs and can lead to sub-standard or harmful products.

“The human costs of counterfeit drugs and vaccinations on health outcomes and the life-long impacts on children far exceed the financial costs. Unofficial payments for services can have a particularly pernicious effect on poor people,’’ World Bank said.

"Every stolen or misdirected dollar, euro, peso, yuan, rupee, or ruble robs the poor of an equal opportunity in life and prevents governments from investing in their human capital,’’ World Bank said.

To limit the vice, World Bank has been taking stringent measures against organisations and states that are doing less to combat corruption.

At the end of the fiscal year 2020, 372 entities have been sanctioned with conditional release, a process by which firms are afforded the opportunity to improve their internal compliance programmes as part of their sanction.

It has also partnered with several governments to implement projects geared towards fighting corruption.

In Kenya, a World Bank judicial project helps establish an advanced data analytics system that is being used to monitor the performance of courts, judges, and court personnel.