•This move will yield cost reductions, which will eventually flow through into lower delivery fees for consumers as well as higher incomes for riders.

•The e-bicycles are equipped with a powerful electric motor and battery that can last an entire day of deliveries after a 4-hour charge. 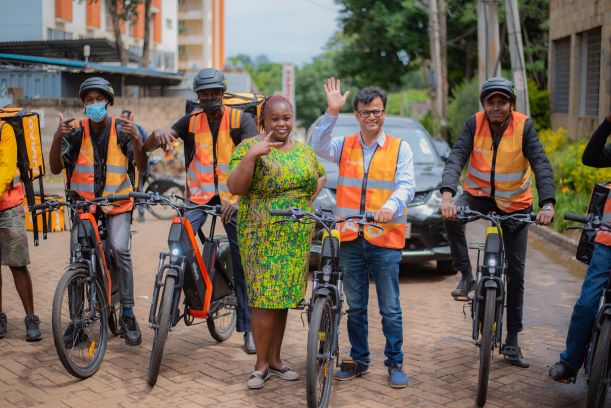 According to Sendy, the main goal is to help reduce carbon footprint in the county, a move that has been carried out by a number of ride-hailing and delivery firms in Kenya.

The deal between Sendy and ARC will see four electric tuk-tuks procured for the two-month pilot project duration. Sendy said it will be looking into getting more vehicles by the end of this year as they spread the service across Nairobi.

Through this partnership, both companies will save costs for riders and consumers while also reducing carbon emissions in Nairobi.

Currently, Jumia’s fleet comprises fuel-based motorbikes. The majority of them are on the road every day to deliver to their customers. The decision to switch them with e-bicycles is consistent with their effort to be an environmentally conscious organization.

“The most exciting thing about e-bicycles and Electrical Vehicles (EVs) more generally is that they make business sense! It’s a win-win for society and the bottom line,” Jumia Services country manager, Ankur Agarwal said.

He added that this pilot with eBee is the beginning of a conscious push across Africa into Electrical Vehicles. They hope that they can play a part as early adopters in speeding up the penetration of the industry in Africa.

This move will yield cost reductions, which will eventually flow through into lower delivery fees for consumers as well as higher incomes for riders. The e-bicycles do not consume fuel and have lower maintenance costs compared to ordinary motorcycles.

Lamenya added that providing affordable, worry-free and clean mobility contributes to their mission to empower every man and woman to do business and to be in charge of their future. Their goal is to have one million eBees on the road in Sub-Saharan Africa by 2030.

The e-bicycles are equipped with a powerful electric motor and battery that can last an entire day of deliveries after a 4-hour charge.

eBee Africa will also offer special rates for Jumia’s logistics partners as the two companies encourage the uptake of eco-friendly modes of transport.

According to an article by Selene Yeager, e-bicycles are bikes with a battery-powered assist that comes via pedaling and in some cases a throttle.

The same year, pedal-assisted electrical bikes dominated the market by propulsion type and accounted for 88.36 per cent of the worldwide market.

The e-bikes work by you automatically swathing on the motor when you pedal. This is because the motor senses how much power you are putting into the pedals and responds proportionally which means that the harder you pedal, the more the motor helps you.

The main aim of the motor is to provide movement when you pedal. The more advanced the electric motor the more power of movement it has to propel you.

The sensor is also an important component since it engages the motor once you start pedaling giving you ride assistance.

Having an e-bike has benefits. One of them is that it is easier to ride. The pedal gives the riders a boost. They help with hills, inclines and rough terrain allowing for smoother rides reducing stress on joints. Additionally, you can take long rides without physical exhaustion.

It is also a great alternative to cars. You can commute with it too and from work as well as run errands. With different routes to travel to your destination, your commute can be faster than a car stuck in traffic.

When you ride them instead of driving, you cut down on gas and pollution thus improving air quality and the environment.

They cut back on expenses since they do not use fuel. Petrol and diesel in most countries are costly and occasional prices surge can impact your budget. With e-bikes, you can buy affordable batteries, which can last you 28 to 80 kilometres.

Lamenya said that the e-bicycles are not only for Jumia but an individual can lease them for Sh9, 500 for a month.

She also added that they currently have delivered 23 fleets to Jumia and the top speed for the electrical bicycles is 45 kilometres per hour.

The first electric bicycles were documented in the 1880s and 1890s in the patent offices in both France and United States according to Tristate cooperative.

In France, the earliest was a three-wheeled electric contraption, the motor power controlled with a handheld lever system without any pedals.