Occupancy rate has risen to an estimated 70% within three years.

•The occupancy rate is projected to grow to 100 per cent next year. 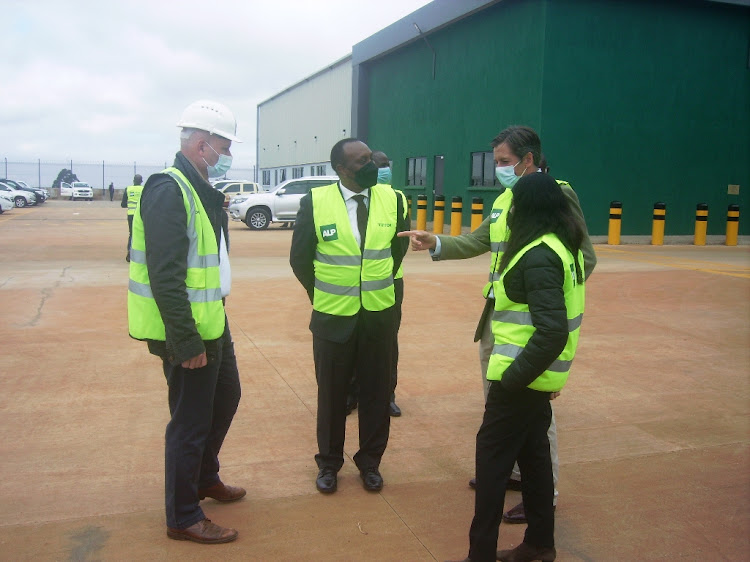 Industrialisation PS Kirimi Kaberia is welcomed by Africa Logistics Properties CEO Richard Hough (in a helmet) and other guests at one of the company's warehouse/
Image: GEORGE MUGO

Grade-A warehousing has strengthened tenants’ operations and encouraged them to compete effectively against other players in the market, a survey by logistics firm–Africa Logistics Properties (ALP) indicates.

Grade A facilities are labeled on the basis of their superior construction quality, location, space, amenities, clients, among others.

According to ALP which developed Kenya’s first Grade-A warehouses to meet demand from local and international companies, modern facilities have enabled businesses to acquire a portfolio of international clients with occupancy rate rising to an estimated 70 per cent within three years.

The rate is projected to grow to 100 per cent next year.

Five years ago, ALP raised $60 million (Sh6.6 billion) from a consortium of investors, including CDC, and used the capital to build 55,000 square metres of Grade-A warehousing across two sites in Nairobi.

Until ALP entered the market, international standard warehousing in Kenya did not exist, and small Grade-C sheds and ‘godowns’ dominated.

ALP tenants attribute increased operational efficiency to the use of Grade-A warehousing facilities, resulting in improved margins and ability to scale.

They have benefitted from 45-60 per cent storage cost savings on a per pallet basis, 63 per cent reduction in turnaround times, reliable utilities, better access to markets, and inventory losses to both theft and damage reduced to near zero, survey notes.

“These benefits have enabled tenants to increase their revenues and grow business margins,” Hough said in an interview.

The commercial warehousing market is expected to record increased activities, influencing a new generation of developers to invest in modern facilities.

This has included the transfer of skills and technology to local market actors and catalyzing local production of quality warehousing equipment which were previously unavailable in Kenya.

According to developers, Grade-A warehousing is a powerful economic enabler as it creates the conditions for businesses to establish highly efficient supply chains and to use them for competitive advantage.

As these businesses grow, they create economic opportunities by creating jobs (directly and indirectly), generating income uplift for suppliers and sales agents, and by reaching new customers and giving them access to a wider product offering.

However, this type of high quality warehousing is often absent or undersupplied in developing markets, which acts as a constraint to economic development.

The survey by ALP used the United Nations Sustainable Development Goals (SDGs) to assess economic opportunity (SDG 8) and productivity (SDG 9) development impacts, both of which are fundamental in warehousing investment.

It also looked at tenants’ employees, suppliers, and customers.

“ALP’s energy efficiency impact (SDG 13) was an additional important component of our investment,” the firm notes.

This study was undertaken in partnership with Open Capital Advisors. Consultations were organised by the Open Capital team with ALP’s management and all six ALP tenants provided the basis for the report’s findings.

Improved competitive landscape Grade-A warehousing is however yet to demonstrably contribute to a more competitive business landscape in Kenya, the survey notes.

This is attributed to a number of factors such as regulatory frameworks, governing infrastructure development, and fiscal incentives which have influenced the development of the Kenyan business landscape.

High-quality warehousing is an integral part of efficient supply chains but is often absent or undersupplied in developing markets.

Commercial warehouses are typically categorised as Grades A, B and C, according to the quality of their facilities.

The Kenyan market has for years been dominated by small Grade-C godowns, often staffed with low skilled informal workers.

Located in the old industrial areas of Nairobi, Mombasa, and Kisumu, these godowns were typically developed by owner-occupiers, with little design consideration for international best practice or the needs of third-party renters.

The inherent limitations of godowns result in operational inefficiencies for tenants, such as loss of inventory to theft, unreliable utilities, and higher storage costs on a per pallet basis.

According to the report, losses to theft result from inadequate security provisions and are often compounded by losses from physical damage of goods.

Tenants may also face higher storage charges on a per pallet basis as the lower floor to eaves height reduces efficient utilisation of vertical space per sqm.

Many godowns lack proper drainage and sewerage facilities, and in some cases are located in areas prone to flooding.

For instance, in Kenya, it is estimated that floods contribute to a direct long-term fiscal liability of 2.4 per cent of total GDP per annum.

The supply of Grade-A warehousing has been growing since 2017, with the completion of ALP West and the Nairobi Gate Park expected to further increase available space.

Out of the 22.2 million square metre of total warehousing space available in Kenya, only 65,000 square metre is estimated to be Grade-A.

“This increased supply will meet the growing demand for larger and higher quality warehouses in the country,” Hough said.

The monthly average actual storage cost per pallet in a Grade-A warehouse is up to $0.90 lower, at an estimated $1.10, for tenants who fully rack their inventory to the ceiling as compared to godown facilities.

However, these savings can only be realised through vertical racking of pallets up to the maximum height of 12 metres.

Further efficiencies can be achieved from the Very Narrow Aisle Pallet Racking (VNA) system, which expands the storage density of the warehouse by narrowing the width of the work aisles by up to 1.5 metre, to save up to 40 per cent in space.

However, this approach requires additional tenant investment in specialised equipment, such as narrow aisle forklift trucks.

Meanwhile, during the pandemic era , demand for consumer goods through e-commerce channel has increased, raising the need for warehousing.

Industrialisation PS Kirimi Kaberia is welcomed by Africa Logistics Properties CEO Richard Hough (in a helmet) and other guests at one of the company's warehouse/
Image: GEORGE MUGO
by MARTIN MWITA Business Writer
Kenya
11 October 2021 - 04:00