The listed firm’s pre-tax loss was Sh8.4 million in H1, 2021 compared to a profit before tax of Sh11.4 million same period last year 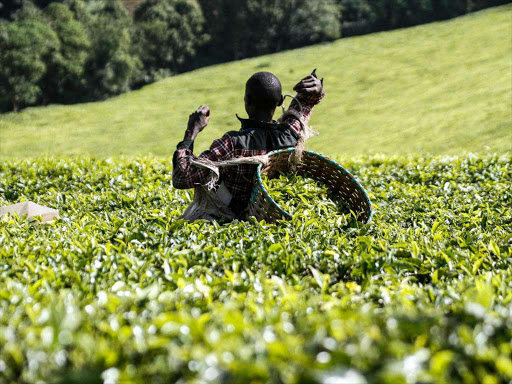 A worker at a tea plantation in Limuru on January 6, 2019./ENOS TECHE

The board has approved the transfer subject to regulatory approvals. This follows a decision by its parent firm Unilever Group to separate its global tea business including tea plantations.

The company says the idea is to create a dedicated tea group within Unilever Group.

In the review announced in January, the international conglomerate touched on several brands which include Lipton, Brooke Bond and PG Tips.

It had initially indicated that it will retain the tea businesses in Kenya, India and Indonesia and the partnership interests in the ready-to-drink tea joint ventures.

In a notice to shareholders of Limuru Tea, the Unilever Kenya board said assets including land and factories will be transferred to TeaCo.

Its contribution to the economy as a foreign exchange earner has increased fromSh0.25 million in 1972 to Sh5.5 billion.

The listed firm’s pre-tax loss was Sh8.4 million in the first half of 2021 compared to a profit before tax of Sh11.4 million same period last year. This was attributed to cost efficiencies undertaken by the business.

By virtue of the transfer of shares, UTKL’s indirect interest in Limuru Tea Plc will also transfer to TeaCo. Unilever Kenya owns a 52 per cent stake in the Nairobi listed Limuru Tea Plc.

In January 2009 Unilever Tea was delisted from the Nairobi Stock Exchange after Brooke Bond took its holding in the company to 97.65 per cent.

The drive for the Anglo-Dutch firm to de-list from the NSE emanated from the fact that it does not meet the requirement that all listed firms should have at least a 25 per cent equity stake owned by local shareholders.

The multinational has a worldwide network and achieves close to half of its turnover in developing and emerging markets in Asia, Africa, Central and  Eastern Europe and Latin America.