Idle clinker capacity is a loss for the country

The proposal to hike import duty to 25 per cent should be considered. 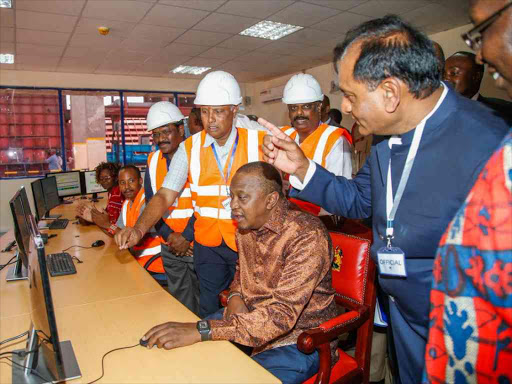 President Uhuru Kenyatta at the cement clinker plant that he launched in Kajiado county, February 7, 2018. /PSCU

Kenya is a net importer. From food to shoes, clothes, hair and perfumes, we are an importing economy. On paper, we love Kenya. We talk of building Kenya.

And this is faithfully on the lips of many government officials. However, our trade statistics betray this. We spent more time thinking of what the next plane touching down should bring in for us. Made by others.

This is the case for clinker, a key component used in cement production. While Kenya has sufficient installed capacity to produce this commodity, the economy continues to burn at least Sh8 billion to import clinker.

The proposal to hike import duty to 25 per cent should be considered. The mentality that imports are always better than local produce should be weighed too.

The government has often used protective policies in growing local manufacturing and applying this on clinker should not be made to look like a black swan event.

For an economy that wants to increase the share of manufacturing in the GDP, create jobs and build strong dollar reserves, it is ridiculous to keep importing what we can comfortably produce.

Despite Kenya having an oversupply of clinker, crucial in producing cement, the product continues to be leading conventional cargo handled at the Mombasa port costing the country $100 million in foreign exchange annually.

A study commissioned by the Kenya Association of Manufacturers (KAM) showed the average landed cost of imported clinker was $100 (Sh11,039) per tonne when landed in Nairobi.

The KAM study showed that the factory price for locally produced clinker was ranging between $47 (Sh5,188) and $85 (Sh9,383) per tonne, translating to saving for cement firms opting for local clinker.

So on the price front, there seems to be no debate that there is a saving for firms that opt for local clinker.

By importing these raw materials like Clinker into the country, we are exporting our jobs to other countries and losing our foreign exchange while already Kenya shilling is under pressure.

Kenyans need more units of the local currency to buy dollars pushing up demand for the greenback to import the Sh1.1 trillion worth of goods that have been brought in over the last seven months.

This has put the Kenyan currency under continued pressure since June when it stood at Sh107.8 against the dollar due to the increased demand against reduced dollar inflow from key export earning sectors such as agriculture and tourism.

Last week the Kenyan shilling hit a nine-month low of Sh110.5 units against the dollar on higher import bills due to oil prices and global strengthening of the greenback.

There is also an agreement that there is the excess installed capacity for local production of clinker.

Now the sector needs to dissect other matters such as price stability, quality and reliability of supply and move to empower local manufactures since this promises more jobs and less pressure on foreign currency.

For instance, the pricing model should not be pegged on that of imported clinker so that it removes fears that local prices will rise in line with increased import duty.

Kenya National Bureau of Standards should also work with local clinker producers to come up with uniform quality specifications for the different types of cement desired by various companies.

Such specifications will help eliminate any quality concerns that may be in the minds of those firms still going for imported clinker.

The case for local clinker should not be seen again for the few for as long as there are no restrictions for expanding existing clinker plants or setting up new ones.

If Kenya becomes import free it will be a win-win for everyone.