The Sh31.7 billion worth proposal is on the Build Operate Own Transfer (BOOT) model 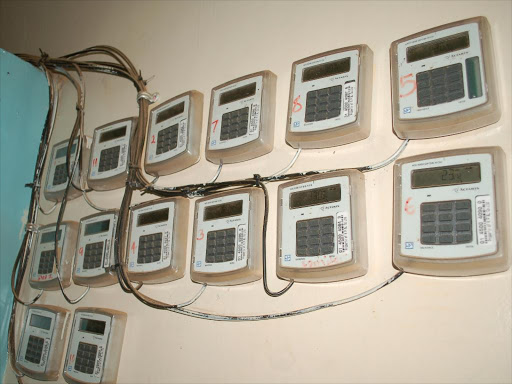 Kenya Power prepaid meters in a flat at Karsarani. /FILE

Kenya Power will cut over Sh10 billion in system losses if it adopts a smart meter proposal by telco firm, Safaricom.

The Smart Grid proposal seen by the Star, the communications firm commits to helping the power utility firm cut system losses by eight per cent, translating to Sh10.4 billion, considering that a percentage of the system is equal to Sh1.3 billion.

A smart grid is an electrical grid with automation, communication and information technology systems that can monitor power flows from points of generation to points of consumption and control the power flow or curtail the load to match generation in real-time.

The proposal is coming hot just weeks after an investigative series by the Star revealed that the power distributor is incurring at least Sh18 billion in system losses every year.

''The solution envisaged by this proposal is aimed at enabling KPLC to have improved energy balance, by metering both the supply-side and the demand-side,'' Safaricom's proposal reads in part.

In the proposal, Safaricom is pledging to deliver smart meters; a two-way communication network for data flow; an advanced (vendor agnostic) meter management platform; a centralized management and control system.

Others are control centre, and data analytics to increase billing efficiency by reducing energy pilferage and provide management insights for speedy decision making.

The first phase will cover an energy distribution area of approximately 6,200 smart meters (consumer, transformers and feeders) in areas adjacent to Mombasa Road and Industrial Area, in Nairobi County.

In this phase, Safaricom will provide pre-financing of approximately Sh600 million to be reimbursed by KPLC upon technical delivery of this first phase. Transfer of title of the smart meters shall occur on full settlement of the costs.

This phase will be executed within a period of nine–months. It will be followed by a three-month period to measure the benefits realized.

In the second phase, Safaricom shall supply and install 330,300 smart meters, comprising all transformer meters (approximately 73,000); 1,300 feeders; and, the first 256,000 smart meters for customers consuming more than 200 power units per month.

This will be completed within a period of 24 months and operated for a further six years.

The proposal envisages  KPLC will finance and install meters for the third phase, leveraging on the infrastructure that will have been deployed in the initial phases.

If implemented, this solution is expected to result in a turnaround of Kenya Power’s current financial position by reducing energy losses.

In addition, it will improve the collection, increase business operational efficiency, and enhance cost efficiency.

Ironically, the proposal by Safaricom which is meant to help the company seal revenue leaks is already facing opposition, with Kenya Electrical Trades Allied Workers Union (KETAWO) accusing the board of forcing the proposal on Kenya Power's management.

Our queries to the lobby group to establish the reason for the opposition and how it established that Kenya Power management is against the proposal had not been responded to by the time of going to press.

Besides Safaricom's application, there is a management paper intended to increase the capacity of the ZTE platform from the current capacity of 100,000 which was what was procured at Sh1.5 billion together with 55,000 smart meters it delivered for the World Bank programme.

The cost is from 100,000 to a million for the head end and another 225,000,000 for the communication protocol. The communication, monitoring and data analysis aspects are however to be outsourced by Kenya Power elsewhere.

A Kenya Power insider who pledged anonymity due to sensitivity of the matter alleged that ZTE is giving just software for meters that’s vendor-driven for Sh10 billion.

Kenya Power has in the past years rolled out several measures to cut system losses with the latest one being the setting up of the Energy Loss Management division in 2014.

Despite investing over Sh10 billion, the percentage of system losses at the loss-making power utility on the verge of insolvency continues to rise from 18 percent to the current 23. 95 per per cent.

Post a comment
WATCH: The latest videos from the Star
by VICTOR AMADALA Business Writer
Kenya
20 September 2021 - 07:10
Read The E-Paper