A large variation in inequality across counties ranged from 27.2 percent to 55.9 percent 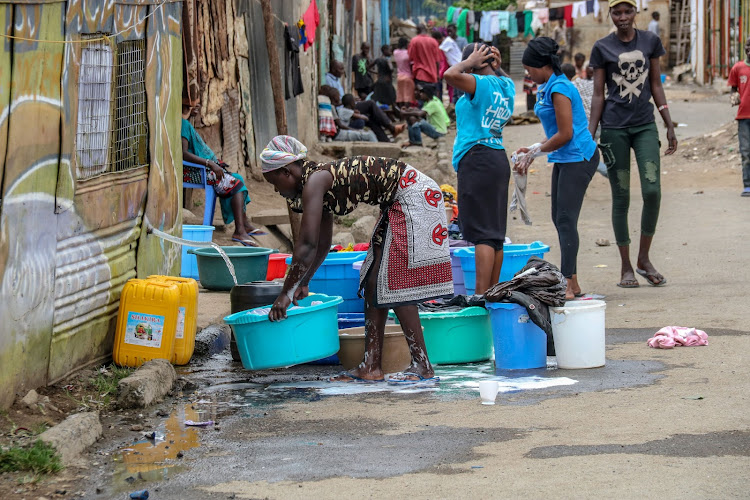 Korogocho residents wash clothes by the road side on April 12, 2020.
Image: WILFRED NYANGARESI

Living in Nairobi costs at least five times higher compared to other regions in Kenya, the latest inequality report by the Kenya National Bureau of Statistics report shows.

The decade-long survey dubbed 'Inequality Trends and Diagnostics in Kenya, 2020 however, shows that city dwellers earn much higher and enjoy access to better social amenities than their rural counterparts.

The survey compared inequality levels in the country between 2005/2006 and 2015/2016 noting a high social-economic disparity between the poor and rich, rural and urban areas and gender.

Despite the drop in inequality between the three categories in a decade to 2016, the Gini coefficient, a measure of statistical dispersion representing the income inequality within a nation was still high at 40 percent.

''There was a redistribution of expenditure share from the top 10 percent richest to the lowest percentiles, resulting in a decline in inequality over the study period,'' KNBS notes.

According to the study, there was a redistribution of expenditure share from the top 10 percent richest to the lowest percentiles, resulting in a decline in inequality over the study period.

A larger decline in inequality was recorded for male-headed households than for female-headed, and in urban, than in rural areas.

A large variation in inequality across counties ranged from 27.2 percent to 55.9 percent. It was also higher in urban areas, among the non-poor, and among household heads with higher education

According to the report, women had low earnings across earnings distributions relative to men.

Inequality in real earnings (Gini coefficient ranging from 49.9 percent to 69.2 percent) is higher than that for real per capita consumption expenditure.

Still, on gender, there was higher gender inequality in access to college and university education with women being severely disadvantaged.

The number of assets owned by households increased from an average of six in 2005/06 to seven in 2015/16; still, two percent of households lack very basic assets.

Post a comment
WATCH: The latest videos from the Star
by VICTOR AMADALA Business Writer
Kenya
13 July 2021 - 16:00
Read The E-Paper