The government is cutting returns on short term local and international debt in a bid to ease repayment pressure amid muted revenue.

Central Bank's data shows that 364-day Treasury bill which earned investors an average rate of 14.2 per cent in February last year dropped to 8.9 per cent last week while returns  on half year bill dropped to 7.7 per cent from an average of 13.8 per cent similar period last year.

Yields on 91 -day Treasury bill on other hand dropped to 6.9 per cent compared to an average of 7.9 per cent same month last year.

In a debt management  presentation to the Senate Finance and Budget committee last week, the National Treasury through the director general ,  Public Debt Management Haron Sirima said the exchequer is working towards limiting uptake of short term loans.

“The 2021 debt strategy is underpinned by the need to move away from relatively high interest cost of domestic debt, safeguard credit flow to the private sector and rely more on long term external financing, preferably concessional loans,” he said.

This has forced the government to reconsider a debt holiday offered by G20 countries, postponing at least Sh78 billion of due debt to June 30.

The country's total public debt was at Sh7.28 trillion by last December, equivalent to 65.6 per cent of Gross Domestic Product. 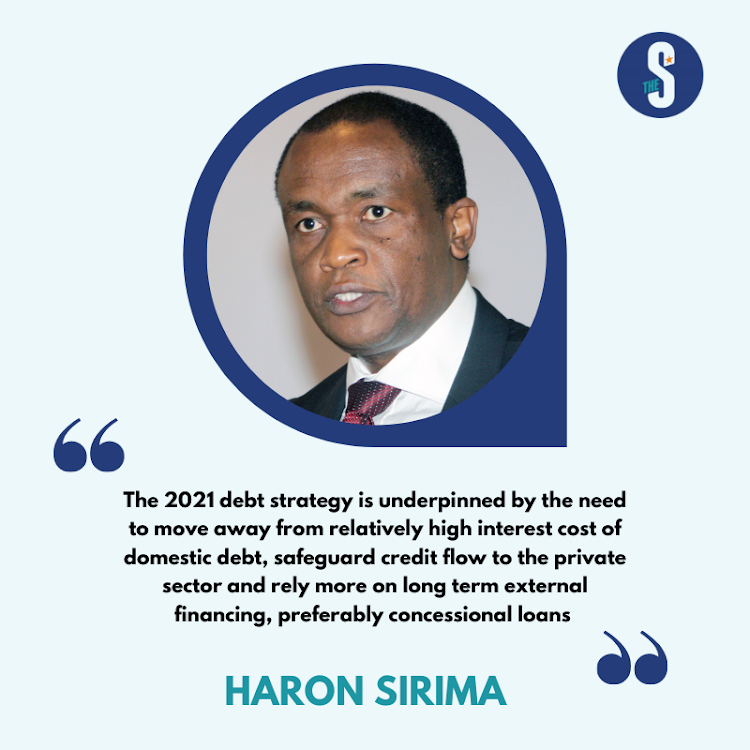 This has, however, not deterred investors' in local government papers, with Treasury Bills which received low uptake towards end of last year oversubscribed.

During the week, T-bills overall subscription rate increased to 124.9 per cent, from 90.6 per cent recorded the previous week.

The Central Bank of Kenya (CBK) attributed this to improved liquidity in the market as evidenced by interbank rates declining to 3.9 per cent, from 4.9 per cent recorded the previous week.

Investors continued their preference on the 364-day paper which had the highest subscription rate of 139 per cent, down from 160.8 per cent recorded the previous week.

This is mainly attributable to investor preference for medium-term papers on the belief that the pandemic has been contained but are still worried about possible effects of the current rising political temperatures preceding the elections in August 2022.