•In the last decade, KCB has cumulatively paid Sh12.98 billion in dividends to the government, a top shareholder.

•Treasury however continues to miss out returns from Kenya Power and Kenya Airways. 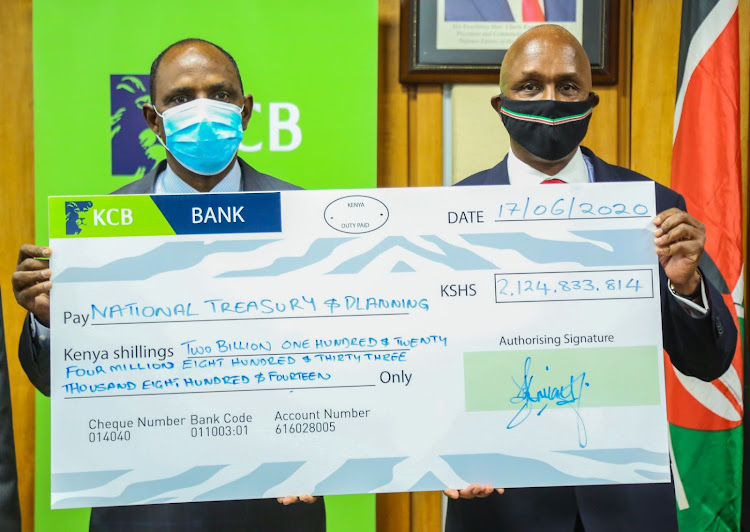 The government's shareholding in listed firms has proved to be a mixed bag  with the National Treasury winning some and losing others.

On Wednesday, KCB Group Plc paid Sh2.12 billion in dividend earnings to the government, remaining among the few consistent entities to guarantee a return on investment to Treasury.

This, as the government continues to miss out on dividends from Kenya Power, Kenya Airways and Mumias Sugar where it has huge stakes.

KCB's dividends for the year ending December 2019 is made up of Sh1 interim dividend and Sh2.50 final dividend—the highest amount KCB has ever paid in dividends to the government.

The group paid out Sh1.8 billion in 2018 and Sh1.6 billion in 2017, which was similar to the previous year, signifying a sustained return to shareholders.

“KCB has over the years consistently maximised shareholder value and provided an unmatched return on investment to its shareholders,” National Treasury CS Ukur Yatani said.

The government has a 19.76 per cent stake in the lender, which in September 2019 acquired troubled National Bank.

KCB Group chairman Andrew Kairu said: “ In the last decade, the bank has cumulatively paid Sh12.98 billion in dividends to the government, a top shareholder.”

The payout, according to Yatani, is timely, coming at a time when there are rising expenditure demands in the wake of the Covid-19 pandemic and revenue collections are subdued.

The 2019 dividends are on the back of a five per cent growth in profit after tax for the year which closed at Sh25.2 billion.

KCB Group has maintained its position as the biggest bank in Kenya in terms of asset value.
Business
1 year ago

Another listed entity with high yields to the government is Safaricom, which posted a Sh74.7 billion net profit for the year ending March 31, 2020.

Safaricom’s board recommended a Sh1.40 dividend payout to shareholders up from Sh1.25 last year from earnings per share (EPS) of Sh1.84.

With a 35 per cent stake in the telco, Treasury is among the biggest gainers on dividend from the firm’s listed 40 billion shares at the Nairobi Securities Exchange (NSE).

Though it is yet to announce dividend payout on the performance of last financial year, until a new Auditor-General is appointed to scrutinise the power producer’s books, it guarantees high returns for the government whose stake in the company is above 70 per cent.

The NSE listed firm paid a dividend of Sh0.40 per share amounting to Sh2.64 billion in February last year.

The government however continues missing out returns from Kenya Kenya Power which on Tuesday issued a profit warning, signalling shareholders will miss dividends for the third straight year.

The Government has a controlling stake at 50.1 per cent with private investors at 49.9 per cent.

Its profit is projected to drop to Sh196.5 million or lower, compared tothe Sh262 million it posted in the year ended June 2019.

“The Covid-19 pandemic has adversely affected our business operations leading to slow growth in electricity sales and an increase in financing costs resulting in reduced earnings,” Company Secretary Imelda Bore said in a notice.

The recent restructuring of Kenya Airways, which saw the government increase its shareholding to 48.9 per cent, is also yet to pay off as the national carrier continues to remain in the red for the fifth straight year.

The Group saw a 12.4 per cent increase in operating costs, driven by the increase in capacity deployed and an increase in fleet ownership costs attributed to the return of two Boeing 787aircraft that had been subleased to Oman Air," Chairman Michael Joseph said in a statement on May 26.