Ethiopia affirms commitment to Lapsset, says other projects not a problem

Lamu Port, Lapsset is our baby, it says.

•Ethiopia has secured a $1.2 million grant from the African Development Bank for a feasibility study on a SGR link to Sudan, and has connections with Djibouti and Eritrea.

•Ambassador to Kenya Meles Alem has however assured of his country's commitment to the Lapsset corridor saying it is critical for Southern Ethiopia. Says the country needs more ports. 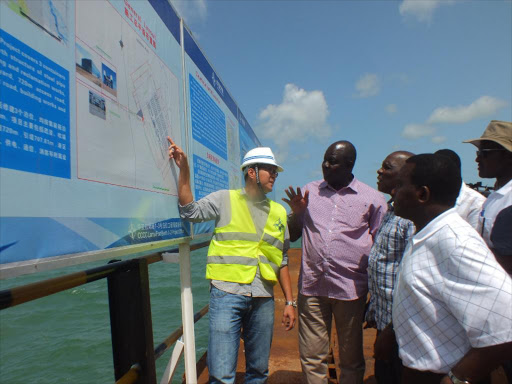 The country last week secured a $1.2 million (Sh127.8 million) grant from the African Development Bank (AfDB) for a feasibility study on a planned Standard Gauge Railway (SGR) link to Sudan.

The railway line will have an extension to Port Sudan on the Red Sea.

Its strengthening ties with Djibouti which has opened trade links and the use of its ports and that of Eritrea, coupled with existing good road and rail network towards the North , is feared could see Ethiopia abandon the Sh2.5 trillion Lapsset project.

Launched on March 2, 2012 by the then Kenyan President Mwai Kibaki, late Ethiopian Prime Minister Meles Zenawi, and South Sudan’s President Salva Kiir, the project has faced challenges that include financing and lack of political goodwill.

Ethiopian Ambassador to Kenya Meles Alem has however assured of his country's commitment to the Lapsset corridor, saying it needs the project as much as Kenya and South Sudan needs it.

Speaking to the Star in a telephone interview, Alem said Lapsset is feasible and Ethiopia is depending on the corridor to serve the Southern part of the country.

•Acting Treasury CS Ukur Yatani said the One Stop Border Point in Moyale, among other six in the country, was being underutilized •Yatani said that ...
Business
3 years ago

He said connecting with other countries is a way of creating more links to serve the country, which is the second most populous in Africa after Nigeria, with about 114.9 million people.

“Ethiopia is a very big country, this is something people should understand, there is no question about the feasibility of Lapsset, it is our baby,” Alem said, “Ethiopia needs many ports.”

He said Eritrea and other neighbouring ports are only usable for the Northern part of Ethiopia.

“Southern part of Ethiopia has no other option apart from Mombasa and Lamu Port. It is very important to us, we need it as much as Kenya and South Sudan needs it,” he said.

“We co-own the project, not for public relations or to please the Kenyan government or the people. We need it.”

He said his country is keen to the operationalization of Lamu Port and opening of the Lapsset corridor, which will deepen trade and economic ties between the two countries and enhance the “traditional relations” between Ethiopia and Kenya.

The envoy added that the Ethiopian government continues to introduce reforms that will open more opportunities , with Kenya being among its top targeted trading and investment partner.

During his visit to Ethiopia in 2018, President Uhuru Kenyatta and Ethiopian Prime Minister Abiy Ahmed committed to strengthen bilateral relations and expedite trade between the two countries.

In January this year, the three partner states in the Lapsset project—Kenya, Ethiopia and South Sudan signed an agreement to fast-track its implementation.

The Lapsset project launched on March 2, 2012, has been facing challenges that include financing and lack of good political goodwill
Business
2 years ago

“Lamu Port is a regional project,” CS Macharia affirmed during the signing.

Lapsset incorporates a 32-berths seaport at Lamu, construction of an oil refinery, three airports including the expansion of Manda airstrip in Lamu and construction of resort cities in Lamu, Isiolo and Lake Turkana shores.

The Kenyan government is putting up the first three berths in a Sh71.2 billion contract awarded to China Communication Construction Company.

The first berth was completed in August last year.

“We it not for the pandemic, we were looking forward to the commissioning of the first berth at the Port,” Alem said, “That project is very important. I want it to be my legacy by the time I leave Nairobi.”

During his 2020/21 budget statement last Thursday, National Treasury CS Ukur Yatani announced Sh6billion has been set aside for the Lapsset project and Sh5billion for the Mombasa Port Development Project.

The government is counting on the private sector to support completion of the Lamu seaport among other developments.

Lapsset Project was in June 2015 endorsed as a Presidential Infrastructure Champion Initiative Project during the AU-Heads of State and Government Orientation Committee meeting in Johannesburg, South Africa.

A strong case has been made to the AU on the Lapsset project’s strategic position.
Business
3 years ago

In January, ODM leader Raila Odinga, who is also the African Union (AU) High Representative for Infrastructure said Ethiopia, South Sudan and Kenya have committed to support the project.

He said Phase II of the project would be a road network connecting East Africa to West Africa dubbed, East-West Trans-Continental Beltway, which connects Lamu Port to Douala/Kribi (Cameroon) seaports via Juba and Bangui.

The three states have agreed to a shared approach and support establishment of an umbrella body to coordinate implementation.

A steering committee composed of representatives from Ethiopia, Kenya, South Sudan, UNECA, AUDA-NEPAD and AfDB will be tasked to establish the umbrella body.

Post a comment
WATCH: The latest videos from the Star
by MARTIN MWITA Business Writer
Kenya
15 June 2020 - 04:00
Read The E-Paper