East Africa’s GDP is forecast to decline by 4.5 per cent compared with the no-COVID scenario, a better performance than in any other sub region 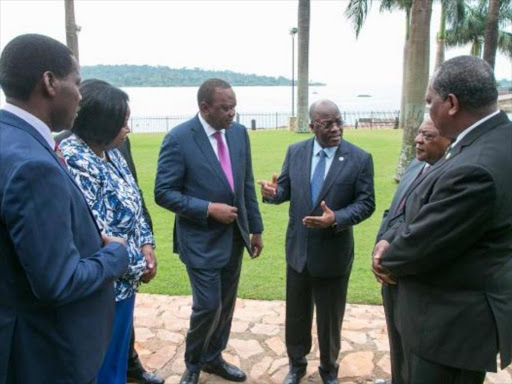 WORKING TOGETHER: Presidents Uhuru Kenyatta and John Magufuli (Tanzania) in Uganda where they and other leaders attended the EAC Summit on February 23, 2018
Image: PSCU

East African states should create policies that promote interregional trade to cushion them from the negative economic impact of the coronavirus spread, the World Bank has advised.

They also need to increase intra-regional trade as well as build regional markets in energy, digital and financial inclusion to help cushion economies.

“At a time when countries are choosing national solutions, autarkic policies, or have non-coordinated efforts across states, Africa needs to intensify its efforts on economic integration and deepening regional cooperation,” the report states.

Kenya, Uganda, and Rwanda have so far sealed off their borders in a bid to curb the spread of coronavirus from neighbouring countries, only allowing goods.

“Borders need to be kept open as much as possible for trade while being consistent with a strategy of containment, and in line with the multilateral provisions of transit,” the report says.

It further shows that closed borders make it difficult for medical supplies and other necessities of life to reach people.

According to the report, closure of borders and imposing of trade restrictions during these tough times will largely affect the livelihoods of small-scale cross-border traders who account for about 43 per cent of the region’s population, predominantly the poor and women.

“Countries need to minimise the health and economic fallout by selective border relaxation to enable the flow of essential goods,” the report stated.

Governments have been urged to instead reduce tax and administrative burdens on importers and exporters and reduce the cost of food and other products heavily consumed by the poor to support the eventual economic recovery.

The East African Business Council’s (EABC) has appealed to the Summit of the EAC Heads of State to convene online meetings to help safeguard the region from the effects of coronavirus.

It recommended that member states ensure borders remain fully operational and they facilitate the free movement of goods and services.

This is mainly on essential items and most traded goods in the EAC, services and service suppliers such as food, medical products, doctors, nurses, scientists, researches, truck drivers from the EAC region.

The Africa Pulse report shows East Africa is the least affected sub-region on the continent owing to the bloc’s better preparedness to manage the crisis as compared to other sub-regions.

“Our estimates suggest that East Africa’s GDP would decline by 4.5 per cent compared with the no-COVID scenario, a better performance than in any other sub-region,” the report stated.

Post a comment
WATCH: The latest videos from the Star
by CYNTHIA ILAKO Business Writer
Kenya
16 April 2020 - 04:00
Read The E-Paper