• The schism which started in the Gulf has spread like a virus.

• President Putin started on Haftar's side but likes to play a ''balancing'' role and might well eventually align with Turkey. 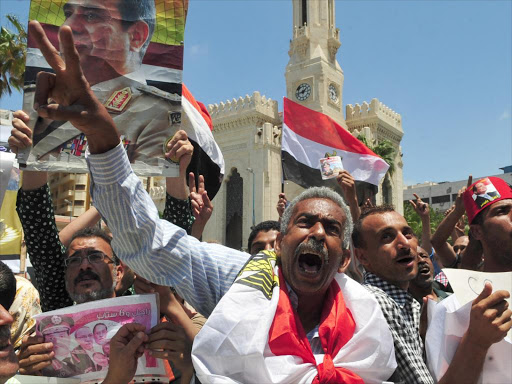 A file photo of Egyptian protesters shouting slogans in support of President Abdel Fattah al-Sisi on June 6, 2014, in the Mediterranean port city of Alexandria. /AFP

I learned from William Dalrymple in an article in the Financial Times that it was a Berber cavalry commander Quintus Lollius Urbicus who after Hadrian’s death, was sent westward, to the furthest and most uncivilized extremity of the empire, becoming the first African Governor of Britain.

The story of the apex of his brilliant career is told in a second inscription found at the somewhat unlikely site of Balmuildy, just to the north of Glasgow. It was wealthy North Africans who crushed the Caledonian resistance and seized north Britain for the Romans.

By the end of the second century, a third of the Roman senate was North African while Emperor Septimius Severus grew up a little to the east in Leptis Magna (now in modern Libya).

Modern Day Algeria finally rid itself of Bouteflika the wheelchair-bound last year but North Africa otherwise known as the Maghreb remains volatile and is still yet to emerge from the ''Arab Spring'' which was triggered by the self-immolation of Mohamed Bouazizi on 17 December 2010, which then begat the Egyptian revolution of 2011, also known as the January 25 Revolution, which toppled Hosni Mubarak and then circled back to topple Muammar Gaddafi [“I tell the coward crusaders: I live in a place where you can’t get me. I live in the hearts of millions.”] with a great deal of help from the Merchants of Regime Change led by Hilary [''We came, we saw, he died''] Clinton.

interestingly, the Advance Guard of mercenary ''Head Choppers'' were then exfiltrated from Benghazi to Syria but their advance was resisted with a great deal of help by Putin and they are now being roundtripped back to Libya, as we speak, by Turkey's Erdogan.

Tunisia, where it all started just under a decade ago, is in a steadier state. Egypt after a brief interregnum under the Muslim Brotherhood has reverted to ''military'' rule and lashings of repression but Al-Sisi used the opportunity to reform the economy and Egypt has been the ''Darling'' of International Investors and the destination for the best carry trade in the world for a number of years.

Since 2010 and over the last ten years, Middle powers like Turkey, the UAE [whom Mattis characterised as ''Little Sparta''], Qatar, Saudi Arabia, and Turkey [Israel and Russia too but they cannot be characterised as Middle Powers] have all extended their reach into the Maghreb and the Horn of Africa. The schism which started in the Gulf has spread like a virus.

I remain a little surprised that the UAE and Saudi Arabia have not visited economic warfare on Istanbul because it does look ripe for the plucking but then Al-Thani is probably providing a backstop. The New York Times has an Article about Mohammed bin Zayed and it reads thus Then the driver pulled up outside a building where Clarke heard popping sounds.

He went inside and saw a group of young women in military uniforms, firing pistols at targets. Seated not far away was M.B.Z., in his white tunic and ear-protection muffs, alongside his wife and an empty third chair reserved for Clarke.

During a lull in the shooting, M.B.Z. introduced the women, who were all his daughters and nieces. “I’m starting a draft,” M.B.Z. said. “I want everyone in the country to feel like they’re responsible. A lot of them are fat and lazy.”

To stimulate the draft, he said, he would begin with all the young people in his own family. And [how the] U.A.E. approached Sisi and outlined the terms of their financial support before Morsi’s overthrow.

“I think there’s every reason to believe he staged a coup,” I was told by one former diplomat. “For a tiny country in the Persian Gulf to overthrow the ruler of Egypt and put their guy in, that’s a big achievement.”The main Theatre for Proxy operations in Libya. Gaddafi characterised Libya as a Cork and he said to Tony Blair that if he was toppled Libya and Africa would be uncorked. It was a prescient prediction.

On one side we have General Haftar a dual Libyan-American citizen who is the Commander of the Libyan National Army (LNA) and is bankrolled and supported by the UAE, Egypt, France and Greece On the other side we have the Government of National Accord led by Prime Minister Fayez al-Sarraj and supported by Turkey and Qatar because they have been joined at the hip for a while now.

President Putin started on Haftar's side but likes to play a ''balancing'' role and might well eventually align with Turkey.

Germany is currently holding a Peace Conference this week. The US is sidelined other than making the odd phone call. Libya is clearly an example of geopolitical ''cliff edge'' risks.

The Horn of Africa exhibits entirely similar characteristics. In fact, from the Maghreb to the Sahel to the Horn of Africa, we are witnessing a surge in asymmetric warfare and the intrusion of Middle Powers.

Post a comment
WATCH: The latest videos from the Star
by ALY-KHAN SATCHU Banker
Kenya
20 January 2020 - 04:00
Read The E-Paper