US firm gives up bid on Imperial Bank assets

KDIC however wondered why the firm was forcing the offer on depositors, leaking correspondences to media, breaching confidentiality 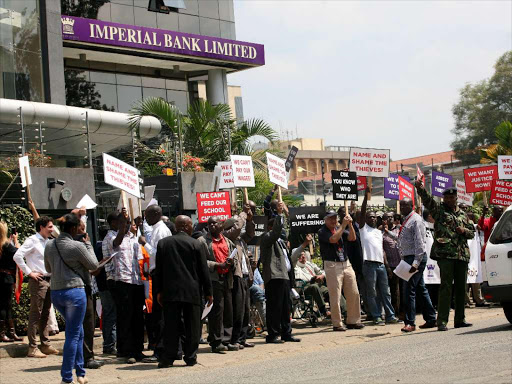 A Canadian subsidiary of the US investment firm Amassment Corporation has withdrawn its offer for Sh49 billion assets of the defunct Imperial Bank, after last Friday's deadline.

In an email to the Star, the firm's chief executive Randy Sidhu accused the Kenya Depositors Insurance Corporation (KDIC) of laxity and unwillingness to give feedback , despite revising the offer to fully compensate depositors without the regulator having to incur any capital compensation.

Last month, KDIC dismissed the first offer from the Canada based unit, saying it lacked merit forcing it to submit a refined offer early this month.

''It is truly a shame, as our revised offer would have given 100 per cent to depositors without KDIC having to incur any capital compensation. Depositors should be angry, as this golden opportunity for full recovery and in the hands of KDIC has now been lost,'' Sidhu said.

KDIC however wondered why the firm was forcing the offer on depositors, leaking correspondences to media and breaching confidentiality.

The depositor's agency added that only institutions licensed by the Central Bank of Kenya can acquire assets and deposit liabilities as per KDI Act 2012.

KDIC boss Mohamud Mohamud said he will issue a comprehensive statement on the matter.

In the revised offer seen , Amassment deleted the clause that required KDIC to invest 20 per cent of deposits in the special purpose vehicle to be fully owned by it.

The transaction was to be a debt-for-equity swap whereby the new company would have issued uncertified class A preferred shares for full face value to depositors.

The special purpose vehicle was to be domiciled either in Kenya or outside the country, with select employees of Imperial adopted to oversee the performing assets and manage the recovery of non-performing loans.

Speaking to the Star on phone, Imperial Bank Depositors Lobby chairman Mahmood Khambiye said depositors are kept in the dark, only reading details of offers granted in press.

''The offer by Amassment Corporation as reported in media was not clear. We did not understand jargons like uncertified class A shares. It is unfortunate that KDIC did not even bother to explain to affected depositors,''Khambiye said.

He added that KCB Group which had submitted a binding offer decided to revise it and neither CBK nor the depositors body said a word.

''We are taken for granted, given raw deal and silence to boot. We just need our funds,''Khambiye said.

The lender was put under receivership in 2015 after it emerged that it was operating two sets of books, with a potential fraud of Sh46 billion, putting depositors’ funds at risk.

In September, KCB Group said it will only take 7.5 per cent of the deposits and an equivalent percentage of liabilities, lower than the initial offer of 19.7 per cent.

A significant portion of Imperial Bank’s assets and liabilities are tied up in lawsuits and will remain with the KDIC.

Post a comment
WATCH: The latest videos from the Star
by VICTOR AMADALA Business Writer
Kenya
18 December 2019 - 04:00
Read The E-Paper