The Port of Mombasa is expected to hit a new record 1.4 million TEUs this year.

•The government has been keen to operationalize Lamu and Kisumu ports as KPA moves to implement a 29-year master plan (2018-2047) to improve efficiency.

•The Ethics and Anti-Corruption Commission and the Directorate of Criminal Investigations have been probing an alleged Sh2.7 billion tender scam at KPA. 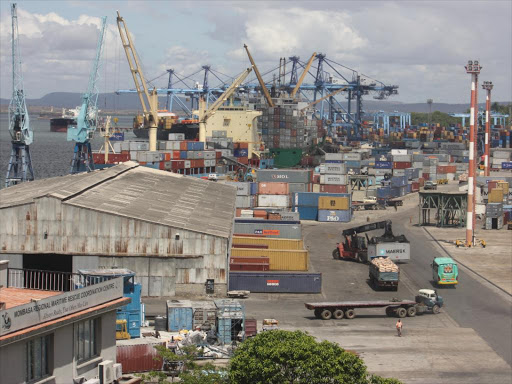 The Port of Mombasa. Photo/ FILE

Port operations  improved in 2019 with significant performance being recorded at the main Mombasa facility, despite corruption allegation at the Kenya Ports Authority as the year ends.

The Port of Mombasa surpassed the one million twenty-foot equivalent unit (TEUs) on September 16, setting the stage for a new record which could surpass this year’s target of 1.3 million TEUs.

This was supported by among others, expansion of the port, deepening of the Kilindini channel which has allowed larger vessels to berth and improved cargo handling capacity which has improved ship turn-around time and cargo evacuation.

“ Going by our daily handling of between 3500 TEUs and 4000 TEUs, simple arithmetic tells us that we might even surpass 1.4 million TEUs," KPA managing director Daniel Manduku told journalists  in Mombasa during a tour of the facility.

This came as phase one of the Second Container Terminal came into full operation, increasing the port's annual capacity by 550,000 TEUs. The second phase which is currently above 30 per cent complete is expected to bring onboard an additional capacity of 450,000 TEUs giving it a total capacity of one million TEUs.

The Standard Gauge Railway(SGR) and rehabilitation of the Nairobi Inland Container Depot (ICD) has also played a critical role is supporting port operations where cargo dwell-time has improved from 23 days a year ago, to about four days.

"I am happy to note that 80 per cent of all cargo is leaving the Inland Container Depot within four days and our average dwell time has gone down to below six days. This is because of the efforts by both government agencies and private sector in ensuring that we make business smooth and efficient,” Manduku said recently.

Cargo volumes hauled by the SGR have continued to grow with a possibility of a new record this year. As of September, total tonnage was 2,784,171 compared to 2018's full-year tonnage of 2,930,698, data from the Nairobi ICD shows.

Another milestone witnessed at the Port of Mombasa this year was the berthing of the biggest bulk carrier vessel in history. This was marked with the maiden arrival of MV Lowlands Mimosa on June 26.

“We have removed many obstacles that slowed down business and we are confident that the reforms we have undertaken will bear more fruit soon,” said Manduku.

At Lamu, the first berth at the planned 32-berths port was announced complete on August 6, by the Lamu Port-Southern Sudan-Ethiopia Transport (Lapsset) Development Authority, which recently confirmed that the second and third berths were 57 per cent complete.

“The government is on schedule for the delivery of the remaining two berths by December 2020,” Lapsset CEO Silvester Kasuku told the Star in an interview.

The government has also been aggressive to have Kisumu Port become operational with a Sh700 million facelift, a facility expected to revive Lake transport and connectivity in the East Africa region.

“Kisumu Port is expected to open up the western Kenya market and further boost regional trade,” Manduku said, assuring port stakeholders of continued developments at the Port of Mombasa, Lamu Port and other small ports in Indian Ocean.

Port operations have however been dented with corruption allegations as the year comes to an end.

The Ethics and Anti-Corruption Commission and the Directorate of Criminal Investigations have been probing an alleged Sh2.7 billion tender scam at KPA.

This came even as the authority in September cancelled tenders worth Sh19.5 billion, accusing a cartel of staff and influential businessmen for trying to sway seven multi-billion tenders.

Other cancelled deals were a Sh2 billion port equipment tender, supply of a tug boat at Sh1.7 billion and a Sh800 million pilot boat.

“The seven were cancelled after tenderpreneurs and some staff tried to collude to influence the outcome,” a top manager within the authority told the Star.

On November 22, KPA’s board suspended all new procurement "with immediate effect", even as chairman Joseph Kibwana affirmed the authority’s compliance with investigations on the alleged corruption.

“The authority is facilitating its staff to honour summons and the officers have dutifully responded to those requests," Kibwana said.

Some officers from the DCI were reported to have been pushing for the interests of influential businessmen with leaked documents, purportedly from the DCI, said to have recommended the prosecution of several top officials at KPA over procurement and payments of contracts.

In a statement to newsrooms, Kibwana said the authority was reviewing its leadership and management processes and internal control measures to improve service delivery.

Meanwhile, Manduku who was appointed MD on May 31, 2018 in acting capacity and later confirmed to the position in December,has been commended for steering KPA to greater heights with several achievements among them provision of a strategic direction for the port, improvement in port performance and profitability.

He has been instrumental in implementation of key projects, improving port community relations, stabilizing the authority and enhancing staff productivity through training, talent management and motivation

With the year coming to a close, the government is keen to ensure development and efficiency of ports, key facilities in the maritime sector, which accounts for 90 per cent of the country’s international trade and a major contributor to the GDP.

Post a comment
WATCH: The latest videos from the Star
by MARTIN MWITA Business Writer
Business
30 December 2019 - 04:00
Read The E-Paper