• The two governments have agreed to hold regular dialogues on trade, agriculture,tourism and health 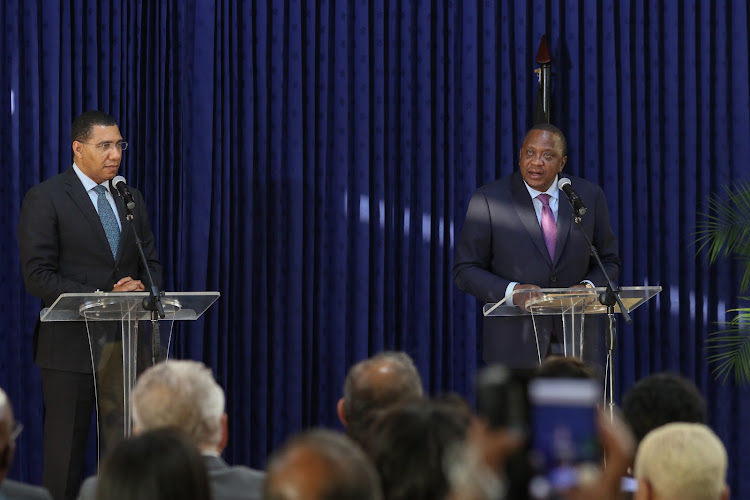 President Uhuru Kenyatta's visit to Jamaica has opened a window for trade that is so far non-existent between the two countries.

There is no official data on trade and investments between the two countries.

This will be supported by four key MoU signed during President Uhuru Kenyatta's three-day visit to Kingston, Jamaica.

They include an MoU on cooperation in tourism, Mou on political consultation and corporation and Mou on corporation in sports , culture and heritage.

Jamaica continues to lag behind the rest of the Latin America and Caribbean (LAC) region when it comes to trading across borders.

“We have looked at our numbers and realised that trade is almost non-existent. We need to deepen our economic relations” President Uhuru said during a forum in Jamaica yesterday.

The two governments have agreed to hold regular dialogues on trade, agriculture,tourism and health. Kenya is also keen on partnerships in the blue economy and air transport.

“We are equally confident that with the signing of these MoUs, the relations between our two countries will be stronger and advanced,” Jamaica Prime Minister Andrew Holness said.

Kenya targets to secure an export market for tea and coffee in Jamaica and the Caribbean, while peanuts stand as a top import from Jamaica.

Jamaica's current trade environment is characterized by complicated and inefficient procedures that lead to high costs and delays.

Furthermore, Jamaica exports far fewer goods and services ((35.1 per cent of GDP) than other countries in the region, such as Aruba (70.8 per cent ) and Grenada (55.8 per cent), World Bank data shows.

Yesterday, President Uhuru fronted Kenya as one of the largest economies in Africa and a hub for logistics, air travel,financial services and ICT.

He also noted Kenya Airways' wide reach including the direct flights to the US as an opportunity to open more partnerships and routes.

“We encourage Jamaican and Kenya investors to come together through our respective chambers and take advantage of the opportunities our two countries offer for further economic intergration,” he said.

While the government has been investing in infrastructure and reforms to ease doing business in the country, Jamaica is still struggling with high costs of doing business, attributable to among others, high levels of physical inspections, high and multiple taxes and fees and lack of coordination among agencies.

Others are multiplicity of licenses, permits and certificates, absence of an integrated and harmonized framework for border agencies, prevalence of manual processes, and low capacity at the firm level to implement international requirements.

Post a comment
WATCH: The latest videos from the Star
by MARTIN MWITA Business Writer
Business
07 August 2019 - 05:00
Read The E-Paper