“I feel like I’ve spent a century on this court. What a great night. That was superb. A ripper, as they say here,” Tsitsipas added.

• Tsitsipas, one of the favourites to win this year’s Australian Open men’s singles title, came into this match having not dropped a set all tournament. 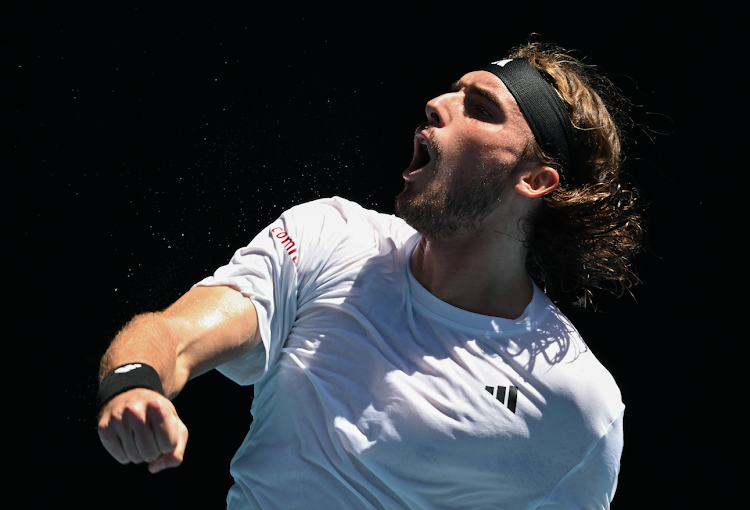 Stefanos Tsitsipas of Greece in action at the Australian Open.
Image: XINHUA

The Greek won the first two sets and then wrestled back the momentum to beat the 15th seed 6-4 6-4 3-6 4-6 6-3 in three hours and 59 minutes. It will be a third consecutive quarter-final in Melbourne for the world number four, who had a boisterous backing.

“I feel like I’ve spent a century on this court. What a great night. That was superb. A ripper, as they say here,” Tsitsipas added. “I’m really excited to be sharing moments like this out on the court. It’s not easy. I had an unbelievable opponent playing incredible tennis in the third and fourth set. I stayed really calm.”

Tsitsipas, one of the favourites to win this year’s Australian Open men’s singles title, came into this match having not dropped a set all tournament. And when he went 2-0 up against his Sinner he looked to be storming towards another straight-set win.

But his 21-year-old opponent, who has played in four Grand Slam quarter-finals, stemmed the tide, breaking early in the next two sets.

Tsitsipas though, backed by plenty of Greek flags on Rod Laver Arena, broke in the final set to go 4-2 up as Sinner hit a forehand long, and he held his next two service games to wrap up the win. He next faces Czech Jiri Lehecka who stunned sixth seed Felix Auger-Aliassime earlier on Sunday.

Lehecka had not won a Grand Slam match before this tournament but is now through to a first major quarter-final.

Auger-Aliassime, who was seeded sixth, becomes the final player to fall to the ‘Netflix curse’, which is supposedly causing players who featured in the recently released series Break Point to bow out of the Australian Open early.

Korda beat Medvedev in the previous round, while rising star Lehecka ended Cameron Norrie’s bid at the same stage.

Korda backed up his win over Medvedev with a tough five-set victory that put him into a Grand Slam quarter-final for the first time.

Afterwards he dedicated his win to his father, Petr, who won the Australian Open in 1998. Korda has previously joked that he is the worst athlete in his family - his mother Regina Rajchrtova was also a professional tennis player and his sisters Jessica and Nelly are LPGA Tour golfers.

“I just got off the phone with my parents,” Korda said. “My dad’s birthday is tomorrow - early birthday present in a way.”

Korda, who will face Russia’s Karen Khachanov in the next round, said he reaches out to the picture of his father and fellow former champion Andre Agassi when he walks out to Rod Laver Arena.

“I always give him like a little fist pump. Kind of makes me feel like they’re with me,” he added. “I always know that they’re watching. They’re both very special for me. They helped me a ton.”

Khachanov reached the quarter-finals for the first time with a comprehensive 6-0 6-0 7-6 (7-4) win over Japan’s Yoshihito Nishioka.

Spaniard Nadal struggled with a left hip problem as he fell to a 6-4 6-3 7-5 defeat by American Mackenzie McDonald.
Sports
2 weeks ago

Britain’s Dan Evans was involved in one of them, leading two sets to one against Argentina’s Facunado Bagnis.
Sports
2 weeks ago
Post a comment
by BBC
Tennis
23 January 2023 - 00:00
Read The E-Paper