• The exit of Ruud, last year’s French and US Open runner-up, means he must wait for another opportunity to land a first Grand Slam title and ended his chance to become the world number one. 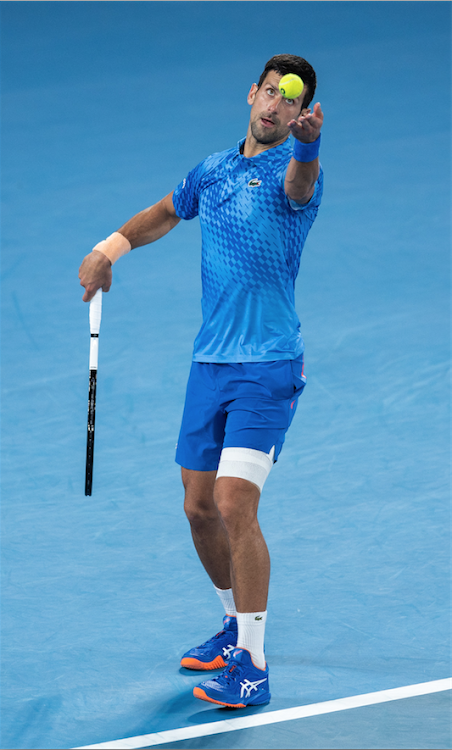 Novak Djokovic of Serbia in action at the Australia Open on January 17
Image: XINHUA

Novak Djokovic battled through injury to reach the Australian Open third round on another day when more of his expected title rivals were knocked out.

Djokovic had a medical timeout, seemingly hampered by an existing hamstring injury, but came through.

Twelfth seed Alexander Zverev, still in the early days of his return from a serious ankle injury, was beaten 6-7 (1-7) 6-4 6-3 6-2 by lucky loser Michael Mmoh, who said he had to change his flight because he had expected to already be out.

The exit of Ruud, last year’s French and US Open runner-up, means he must wait for another opportunity to land a first Grand Slam title and ended his chance to become the world number one.

The 24-year-old Norwegian was outplayed by world number 39 Brooksby, who took control early with two breaks of serve in the opening set and commanded play from the baseline in the second.

Ruud, who later said he had felt “tension and some slight pain” in his abdomen but refused to blame that for his performance, saved three match points in the third before winning a tie-break to force another set.

But 22-year-old Brooksby regrouped to break early in the fourth, sealing the win when his opponent sent a backhand long.

“Casper’s a warrior, I knew it’d be a great battle out there. I was pretty confident with my level and just wanted to have fun out there and see what could happen,” Brooksby said in his on-court interview. “I was really proud of my mental resolve out there after the third-set battle didn’t go my way to turn it around.”

Brooksby will face Tommy Paul in the next round after his compatriot beat Spanish 30th seed Alejandro Davidovich Fokina in five sets. The men’s draw was already without last year’s Wimbledon runner-up Nick Kyrgios, who withdrew before the tournament through injury, leaving Djokovic as the overwhelming favourite.

American Mmoh was expecting to fly home on Wednesday, but was a late call-up into the main draw when another player withdrew.

The 25-year-old, whose father Tony reached the Australian Open second round in 1988, sealed victory against Zverev with a smash and fell to the floor on his back to take in the biggest win of his career.

Mmoh, who had Australian cousins in his box from his mother’s side of the family, said of his whirlwind week: “Right when you think everything is looking dark, there’s light at the end of the tunnel. My week is proof of that. I was packing my bag, I had my flight booked. The fact I am still here playing on Margaret Court [Arena] is insane. I’m not even supposed to be here.”

Spaniard Nadal struggled with a left hip problem as he fell to a 6-4 6-3 7-5 defeat by American Mackenzie McDonald.
Sports
2 weeks ago

Britain’s Dan Evans was involved in one of them, leading two sets to one against Argentina’s Facunado Bagnis.
Sports
2 weeks ago