Alcaraz says success in New York has ‘come so fast’

Spain’s Alcaraz, 19, achieved both feats after a four-set win over Norway’s Casper Ruud on Sunday.

• “It’s crazy for me. I never thought I was going to achieve something like this at 19 years old,” he said.

• Alcaraz’s coach Juan Carlos Ferrero, himself a former world number one, said he thought his protege was still only playing at 60 per cent of his potential. 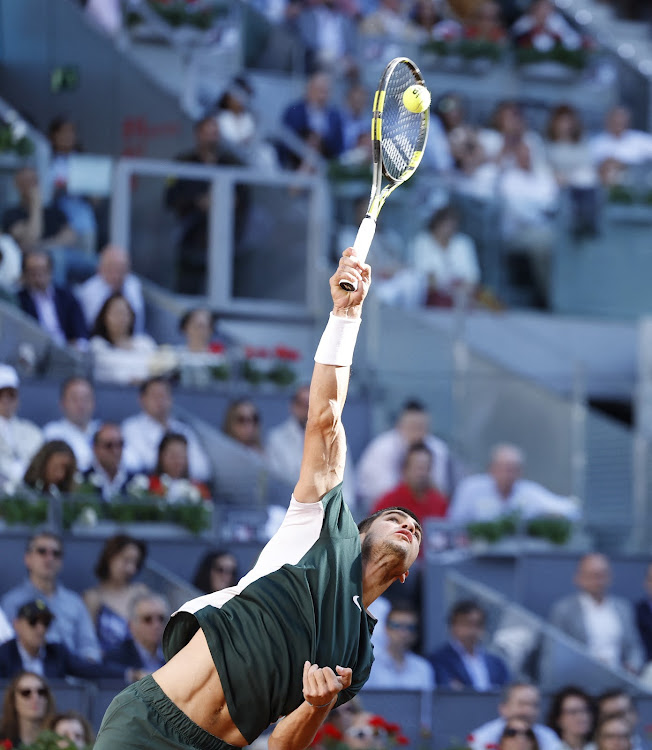 Spain's Carlos Alcaraz Garfia in action during a past match
Image: FILE

New US Open champion Carlos Alcaraz says everything has come “so fast” after he won his first major title in New York and became the youngest men’s world number one in history.

Spain’s Alcaraz, 19, achieved both feats after a four-set win over Norway’s Casper Ruud on Sunday.

“It’s crazy for me. I never thought I was going to achieve something like this at 19 years old,” he said.

Rafael Nadal said he was sure it would be the “first of many” for Alcaraz.

The 36-year-old Spaniard, who has won a record 22 men’s singles major titles, congratulated his compatriot shortly after he sealed victory at Flushing Meadows.

“Well, I have one. He has 22. I’m on the way,” Alcaraz said smiling. “Right now I’m enjoying the moment. I’m enjoying having the trophy in my hands.

“Of course, I’m hungry for more. I want to be at the top for many, many weeks. I hope many years. I’m going to work hard again after this week, these amazing two weeks. I’m going to fight to have more of this.”

Alcaraz’s coach Juan Carlos Ferrero, himself a former world number one, said he thought his protege was still only playing at 60 per cent of his potential.

But Ferrero added he is not surprised the teenager has won a major at such a young age, believing Alcaraz was “born to play” the biggest matches in the sport.

“He can improve a lot of things,” said Ferrero, who won the 2003 French Open. He knows and I know that we have to keep working. Once you get to number one, it’s not done and you go.

“You have to keep working, keep playing at a huge level at those tournaments to keep winning. He knows that and I know that.”

Ruud, who moves up to second in the world, agreed Alcaraz is a special talent.

“It’s incredibly impressive what he has achieved already as a teenager. It’s sometimes hard to believe he’s only teenager,” the Norwegian said.

“He’s one of these few rare talents that comes up every now and then in sports. That’s what it seems like. Let’s see how his career develops, but it’s going all in the right direction.”

Ruud, 23, emphasised the positives of reaching the second Grand Slam final of his career in New York, rather than dwelling on losing another chance to lift his first major trophy. He was outclassed by Rafael Nadal in the French Open showpiece earlier this year, but few expected him to make such a deep run on the hard courts at Flushing Meadows.

“Of course, it is disappointing in the end that it didn’t go my way,” Ruud said. “At the same time I’m proud of the match and the two weeks. I gave it all. I left it all out on the court.

“I played some phenomenal tennis throughout the two weeks, probably my best tennis ever on this surface. So I’m very happy in the end. We’ll hopefully get another chance at a Slam in the future.”

Iga Swiatek says anything is possible after New York win

Poland’s Swiatek, 21, became the ninth woman to win a third major title before her 22nd birthday
Sports
2 weeks ago

Alcaraz beats Sinner in epic 3am finish at US Open

The third seed will face Frances Tiafoe on Friday for a spot in Sunday's final.
Sports
2 weeks ago

Okutoyi sets sights on Doubles category at US junior Open

The teen sensation lost to eighth seed Taylah Preston of Australia 6-2 7-6(7-4) 6-1 to bow out of the singles category at Flushing Meadow in New York.
Sports
3 weeks ago
Post a comment
WATCH: The latest videos from the Star
by BBC
Tennis
13 September 2022 - 00:00
Read The E-Paper