Injera, an alumnus of Vihiga High School, first played his local club rugby for Ulinzi before moving to Mwamba.

•USA coach Mike Friday, who coached Shujaa for one season between 2012-2013, said it was a joy to work and train with the Mwamba winger.

•Former Kenya Sevens skipper Andrew Amonde, who played with Injera for a decade,  described him as  one of the best the country has ever produced 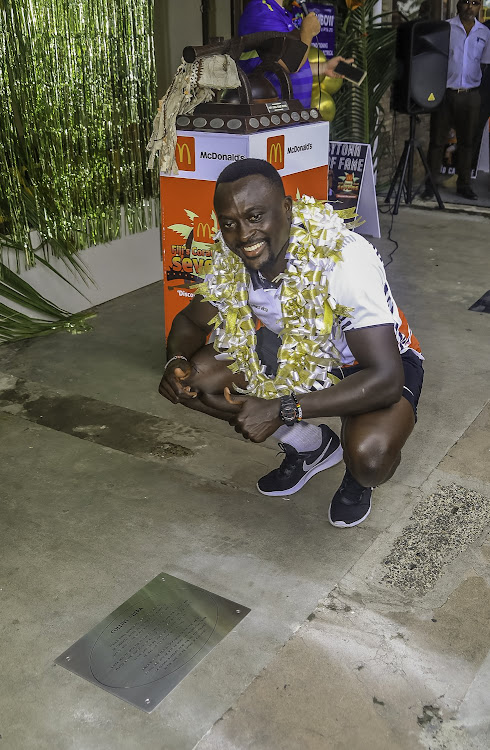 Collins Injera unveils his plaque on the walk of fame at Sigatoka.

Coaches and players have paid glowing tribute to the retiring Kenya Sevens legend Collins Injera who hang his boots on Tuesday following a glittering 17-year career.

USA coach Mike Friday, who coached Shujaa for one season between 2012-2013, said it was a joy to work and train with the Mwamba winger.

On his Twitter handle, Friday said: “It was a pleasure to hunt with you Kolo—Helluva career and you made Kenya proud. Enjoy the next chapter and the 3 wise men, you have earned it. Big Love.”

Former national team Selector Herbert Mwachiro was equally full of praise for Injera, saying: “It has been a chequered career for Collins. I am proud to have been the first person to select you for national representation and it certainly paid off."

“Collins has rightfully earned his stripes and deserves a huge clap on hanging his boots. He has given his all to the game, his club and the country. Let him have his body back and he can now relax with the few aches and pains that are there. God bless him," he concluded.

Kenya Rugby Union (KRU) director of Rugby and former Simbas' head coach Thomas Odundo also paid tribute to Injera, saying: “Collins has been a great servant of the game, scaling heights.  I don’t think even he imagined.  I first played Collins in possibly some of the hardest matches any Kenyan has played – against the Southern Spears.  The trip was an eye-opener for many of us, both coaches and players.  I believe he took the learnings from that trip to become what he is today. He was always a fast learner and adapted quickly.”

Former Kenya Sevens skipper Andrew Amonde, who played with Injera for a decade,  described him as  one of the best the country has ever produced

He has been an ambassador of the sport for the country and playing with him was an honour. "I wish you the best in your next assignment,” added Amonde.

Injera, an alumnus of Vihiga High School, first played his local club rugby for Ulinzi before moving to Mwamba. He also featured at the 2016 and 2020 Olympics and was part of the 2016 Singapore Sevens winning squad.

Injera paid tribute to his family and teammates, saying: “To my wife Chebet and my kids; Chloe, Clyde, and Carl, thank you very much for all the love, support and understanding you have given me all these years.

"Those days, weeks, and sometimes months that you have endured without my presence as I was busy chasing my dream across the globe are finally over.

"It’s now time for me to spend much-needed quality time with you. Thank you, mum, dad and Linda, for all the prayers, advice, and support. My brothers, Tall and Mike, we did it!”

Commenting on life after rugby, Injera said, “For my next chapter, I will continue with my humanitarian work and will be joining global satellite business and UN Sustainable Development Goals Quality Education Partner, Avanti Communications, in an exciting new role to support its East African operations.

Injera was recently inducted into the  Fiji Hall of Fame following his exploits and services to the game.

He played a key role alongside his brother Humphrey Kayange and Andrew Amonde when Shujaa bagged the Singapore Sevens crown in 2016.
Sports
4 days ago

Injera calls for state to fairly reward athletes for achievements

Injera was recently inducted into the Fiji Hall of Fame during the Coral Gold Coast Sevens
Sports
4 days ago
Post a comment
by WILLIAM NJUGUNA Senior Sports Writer
Rugby
25 January 2023 - 05:00
Read The E-Paper