A tight tournament has thrown up as many questions as answers.

•The hosts scored three final-quarter tries to reel in the runway All Blacks, before a monster Nic White penalty on 77 minutes gave them the lead for the first time. 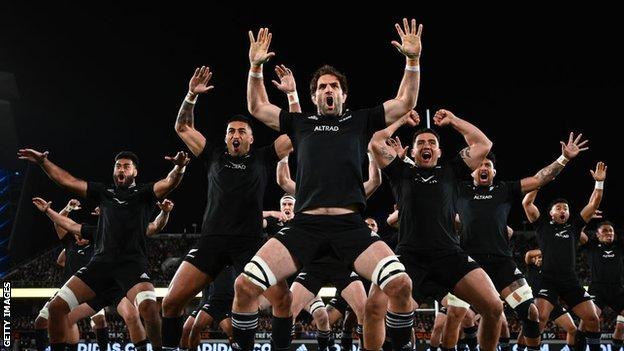 The All Blacks lifted the Rugby Championship again, but it was a far from simple campaign from the defending champions
Image: BBC

The southern hemisphere's big beasts have had their final, full-on, pre-World Cup scrap.

The Rugby Championship, set to be shortened in the run-up to France 2023, was lifted by New Zealand for the fifth time in the last six years.

A tight tournament has thrown up as many questions as answers, but here are five conclusions from the thrills and spills of the past eight weeks.

Foster survives to fight another day

Never mind the Sword of Damacles, it was 'Razor' of Crusaders that hung over Ian Foster back in August.

After a summer series defeat by Ireland and a well-deserved loss to the Springboks in their Rugby Championship opener, there were calls for the New Zealand head coach to be dropped and the Crusaders' all-conquering Scott 'Razor' Robertson to be parachuted in.

It is a tactic that has worked in the past - Rassie Erasmus' arrival jump-started a stalling South Africa in 2018 and he led them to the Rugby World Cup 18 months later.

New Zealand Rugby opted to stick with their man, rather than twist. They backed Foster to see out the France 2023 cycle.

Ten days later, Foster was having to explain away his team's first home defeat by Argentina.

Perhaps he does have the answers. New Zealand won their final three games to cling onto their title.

But, considering the standards set in the past, it was a campaign the men in black would prefer to erase from collective memory. Doubts remain, not least in the normally bullish Kiwi public.`

Lukhanyo Am played only three games of the Rugby Championship. He won only one. As the Springboks finished their campaign with a win over Argentina, Am was watching with a pair of crutches to hand.

Yet, even allowing for a knee injury midway through the tournament, the 28-year-old was its stand-out performer. Steely in defence, silky in attack, his ability to be in right place at the right time on either side of the ball is uncanny.

His involvement in the forthcoming northern hemisphere tour depends on the speed of his recovery. With fixtures against Ireland, France and England, ranked first, second and fifth in the world respectively, the world champions will be willing his healing on.

The improvement has been swift and sustained. After a series victory over Scotland in the summer, they dismantled Australia 48-17, claimed a first win over the All Blacks in New Zealand a fortnight later and finished the tournament with a gutsy showing away to South Africa.

Gloucester's Santiago Carreras, who plays in the back three for his club, has proved a revelation at 10.

There were certainly knock-backs. The revenge thrashing by New Zealand was a sore one. But the perennial wooden spooners went into the final weekend with a faint sniff of silverware instead. That is undeniable progress.

Cheika's coaching style is a heady mix of ambition and emotion. And, so far, it is hitting the spot for the Pumas.

Next year's Rugby World Cup might be decided by whose talent pool is deepest, rather than strongest on the surface.

They used to take about the attrition rate that Test injuries had on a squad. Now, it the effect is closer to obliteration.

Australia started the tournament with Quade Cooper at 10. He lasted 47 minutes before an Achilles tendon injury ended his season.

Young pretender Noah Lolesio was ruled out with concussion, leaving Bernard Foley to come in from the cold after three years out and finish as the Wallabies first-choice playmaker.

With key men Michael Hooper, Samu Kerevi and Hunter Paisami already ground down by the modern game, coach Dave Rennie had to delve deep into his playing reserves.

They were far from the only team affected.

A squad spread thick with experience and the ability to adapt around missing combinations is the must-have for modern tournament rugby.

The hosts scored three final-quarter tries to reel in the runway All Blacks, before a monster Nic White penalty on 77 minutes gave them the lead for the first time.

Then? Controversy, confusion and capitulation. Referee Mathieu Raynal blew up for a rare time-wasting penalty against the Wallabies, Jordie Barrett dived over for a try with the clock in the red and the Wallabies, on the cusp of a famous win, tasted bitter defeat.

It was five-star stuff. A lurching joyride, enjoyed from the edge of your seat.

The match was staged on a Thursday to avoid a clash with the climax of the domestic rugby league and Aussie Rules seasons. Both sports are ahead of union in Australia, as is cricket and, arguably, football.

The Wallabies will host the British and Irish Lions in 2025. Australia will put on the Rugby World Cup in 2027 (men) and 2029 (women). Before then the Australia public need more performances like that, and fewer hard-luck stories in their wake.