In the 2005 edition, Shujaa played in HongKong bowl category after getting knocked out in the preliminaries.

•The winner of this clash will progress to the round of 16, where Argentina lie wait later in the day.

• Kenya's best performances at the Rugby World Cup Sevens came in 2009 in Dubai and 2013 in Moscow, where they reached semifinals. 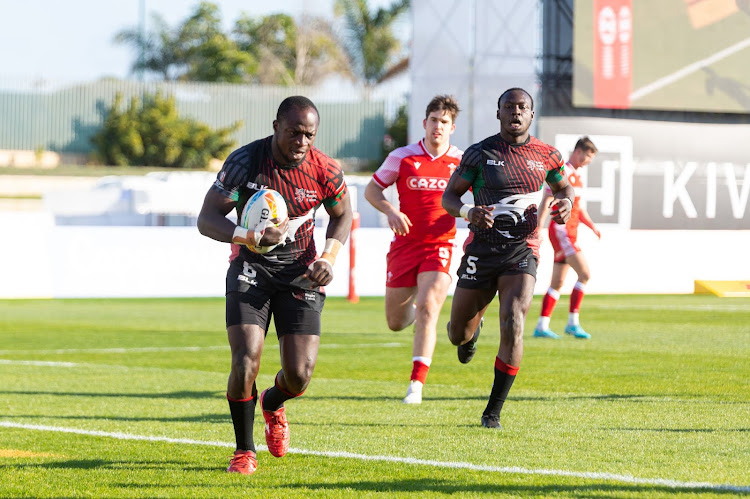 Kenya Sevens' vice captain Jeff Oluoch heads for the try-line against Wales in a past match
Image: HANDOUT

The winner of the clash will progress to the round of 16, where Argentina lie wait until later in the day. The match against Tonga will kick off at 11:23 am.

Shujaa and Tonga met at the Rugby Sevens World Cup in San Francisco in the USA with team Kenya winning 19-7.

Head coach Damian McGrath said they will take one game at a time and are not looking ahead to potential opponents.

“The nature of this tournament is knockout. There are no group stages so our first match against Tonga is vital. We know they are a physical side and past history will count for nothing. The Sevens game is very unpredictable,” he added.

The Englishman observed the team will be seeking to improve on their recent displays at the Commonwealth Games and Los Angles Sevens tournaments.

“The team has steadily improved in some facets of play and the confidence is there. The boys are in good spirit and we can't wait for the tournament to get started," he noted.

Kenya Sevens' talisman Collins Injera is back in the squad after last playing at the Tokyo Olympics.

He will be playing in his fourth World Cup and said he is relishing the challenge of playing with the side.

"Getting a chance to play in the World Cup is huge. Everyone would want to represent his nation at the World Cup and I’m just grateful to be here. We love big competitions and I am happy to be selected," he added.

Injera admitted that the team has made great strides this season and will be a darkkhorse at the championship.

“I believe the team has improved in the last couple of tournaments. There is cohesion as far as their playing style is concerned and the nature of sevens is unpredictable on any day. We can beat anyone,” added Injera.

Skipper Nelson Oyoo said the team has had a good build up to the event after arriving in Cape Town on Monday.

“It's been a good week in terms of light training and preparation and adapting to the weather here," he noted.

Kenya best performances at the Rugby World Cup Sevens came in 2009 in Dubai and 2013 in Moscow, where they reached the semifinals.

In Kenya's first appearance at the 2001 edition in Argentina, they made it to the bowl semifinals.

In the 2005 edition, Shujaa played in HongKong bowl category after getting knocked out in the preliminaries.

Ndale vows to fund raise for national teams after being elected

The affiliates took a vote to allow counties to take part in the election.
Sports
2 months ago

The Nakuru RFC winger said with the tournament being played in a knockout format right from the first game, there will be no margin for error in the ...
Sports
3 months ago

Kenya Sevens' vice captain Jeff Oluoch heads for the try-line against Wales in a past match
Image: HANDOUT