In the quarterfinal, they lost to New Zealand 31-0 and then succumbed to a 22-12 loss to Scotland in the classification match.

•The Nakuru RFC winger said they will be buoyed by the performance at the Commonwealth  Games, where they finished seventh overall. 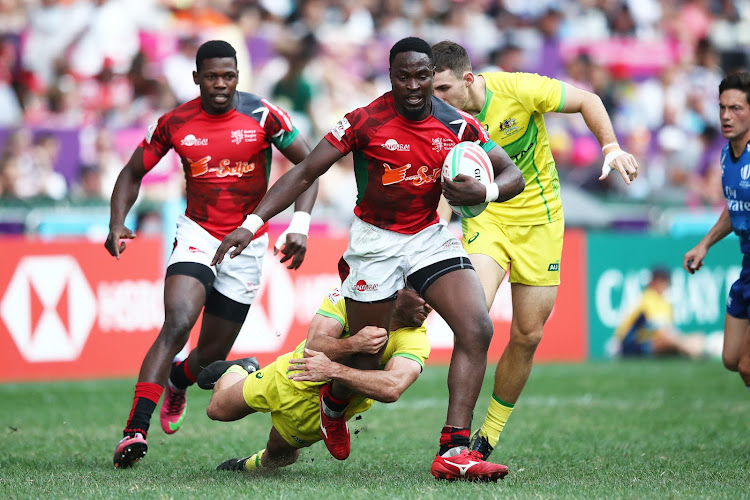 Kenya's Nelson Oyoo drives through the Australia defence in a past event
Image: HANDOUT

Kenya Sevens skipper Nelson Oyoo has set his sights on the quarter-finals of the Los Angles Sevens slated for August 27-28 after exiting the Commonwealth Games.

The Nakuru RFC winger said they will be buoyed by the performance at the Commonwealth  Games, where they finished seventh overall.

"We are making progress and the tournament has given us a boost that we can go further in the next event,” said Oyoo.

In the quarterfinal, they lost to New Zealand 31-0 and then succumbed to a 22-12 loss to Scotland in the classification match.

Oyoo, who is one of the longest serving members of the squad, said one area they will have to work on before the event in the USA will be the breakdown after coming second best in the quarterfinal against New Zealand.

"We were outplayed in that facet of play by the All Black and going forward, we have to improve,” noted Oyoo. He said there are positives to take home from the three-day tournament.

“We have ticked several boxes from the event. It's a journey and we are not the finished article as there are a few areas we have to polish up in order to match the like sof New Zealand, Fiji, or South Africa,” said Oyoo

The Los Angeles Sevens' will be a good warm-up tournament for the Rugby World Cup slated for September in South Africa.

Kenya will open their campaign against Tonga in Cape Town,  according to Oyoo.  “It will be an eye opener to test our systems and continue with the momentum we have from Birmingham and also improve our fitness and conditioning," Oyoo said.

Head coach Damian McGrath hopes the team will be in peak shape by the 2024 Summer Olympics in Paris.

“ We have a year and a half to be in the best possible shape and be a contender come the Olympics in two years' time,” he added.

The team is expected home this week in two batches and will thereafter rest for a week before resuming training on August 12. The team departs to Los Angeles on August 22.

Shujaa's campaign at the games took off on a plausive note with an emphatic 27-14 thumping of Uganda Rugby Cranes in their Group D opener in ...
Sports
1 week ago