Shujaa are in Pool'A' alongside Zimbabwe, Germany and Stallions Sevens of Nigeria.

•Chipu are in Pool B and face a stern test from two-time winners Samurai, Red Wailers and South Africa All Stars Sevens Academy. 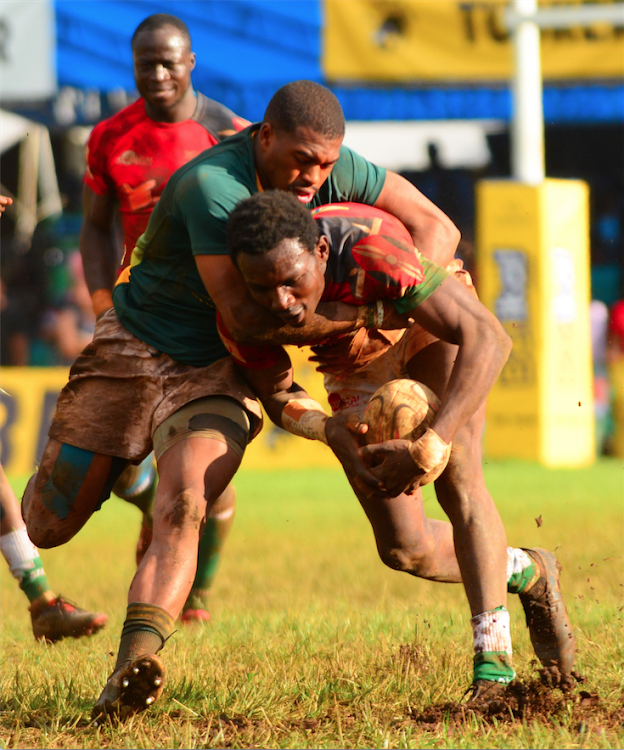 Geoffrey Okwach is tackled by Darren Adonis of South Africa during the Safari Sevens final at RFUEA on October 20
Image: ERICK BARASA

Shujaa are in Pool'A' alongside Zimbabwe, Germany and Stallions Sevens of Nigeria.

Chipu are in Pool B and face a stern test from two-time winners Samurai, Red Wailers and South Africa All Stars Sevens Academy.

The top two teams in each pool advance to the quarter-finals with the best two third-placed finishers joining them in the last eight.

Shujaa will be using the event as a build-up in readiness for the start of the World Sevens Series in Dubai next month  while the Kenya Sevens technical bench will use it as  a trial to select the team.

Vice captain Jeff Oluoch said the squad is relishing the challenge of competing against some of the best teams in the two-day tournament.

“We are looking forward to the event. We have two solid weeks of training and definitely the bigger picture is to be in the best shape for the World Sevens Series in Dubai in November."

Kenya Lionesses teams will face Uganda and Zimbabwe alongside Titans Rugby Academy from South Africa. The women's tournament will be played on a round robin format.

Age grade and veterans rugby will get the 2021 Safari Sevens underway on Friday at the same venue.

The age-grade competition will feature action in the U12 and U-14 mixed tag rugby categories. The youngsters will get the day’s activities underway on Friday morning.

Pool 'A' in the U-12 category will feature—Little Princes, Ole Polos, Bulbul and St. Austin’s while Pool 'B' has Jamhuri, Eagles Ruaka, Creima and Kibera Golden Stars.

Christco, Ngong, Oloishobor and Shamas make up Pool 'A' of the U-14 competition with Central, Runda, Mukuru and Kibera Golden Stars competing in Pool 'B'. Toi Primary, Bulbul, Ngong and Nanyuki will form Pool 'C' while Matasia, Kitengela, St. Austin’s and Runda are in Pool 'D'.

Meanwhile, the veterans competition which is open to players aged 35 and above has attracted six teams split into two pools of three.

Pool 'A' features Mwamba, KCB and Blak Blad while Pool 'B' consists of Nondescripts, Kenya Harlequin and BATUK.

They will begin their fixtures at 2.00pm with the top two sides in each group at the close of pool play advancing to the semifinal.  The final is slated for 5.20pm.