The duo can now play for their clubs this season, thanks to Sports Disputes Tribunal Judge John Ohaga's temporary restraining order.

•Both Madoya and Kipyegon previously played for former top-flight minnows Zoo Kericho who got caught up in the middle of the chaos. Six of the 15 suspects are ex-Zoo players. 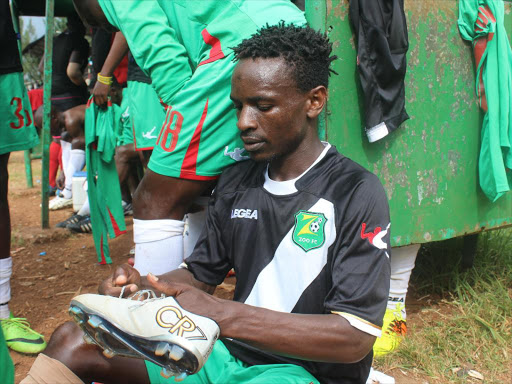 Midfielder Mike Madoya during his days at Zoo Kericho i
Image: FILE

Two Kenyan Premier League players have been exempted from a match-fixing ban imposed by the Football Kenya Federation last week.

Mike Madoya, the 2018  league's Most Valuable Player and Tusker FC defender Isaac Kipyegon went to court on Thursday to seek a stay of proceedings.

The duo can now play for their clubs this season, thanks to Sports Disputes Tribunal Judge John Ohaga's temporary restraining order.

"It is hereby ordered that an interim order of injunction be and is hereby issued staying the decision by the Football Kenya Federation communicated vide a press release letter dated January 13, 2023, to suspend the first and second applicants pending the full hearing and determination of this Application," part of Judge John Ohaga's order read.

Both Madoya and Kipyegon previously played for former top-flight minnows Zoo Kericho who got caught up in the middle of the chaos. Six of the 15 suspects are ex-Zoo players.

"As a club, we are pleased and supportive of the FKF's decision. If the accusations are based on the time the players were with us, we are eager to work with FKF to ensure any guilty party is removed from the game," Ochieng said.

However, a courtroom showdown appeared imminent after the duo asked Ochieng to refrain from dragging their names into the match-fixing investigations.

"I am prepared for the case and eager to meet them in court. He who alleges must prove, and I will be able to present evidence in this regard," Ochieng stated.

In a letter signed by chief executive officer Barry Otieno last Friday, FKF said they had initiated inquiries into the suspects' actions with immediate effect.

“To protect the integrity of the league, in line with the federation’s zero-tolerance policy match-fixing, the FKF has with immediate effect provisionally suspended the  individuals pending the investigations of the matter by the Fifa & FKF’s integrity department.

In April 2021, Fifa relegated the Kericho-based club to the third-tier league after finding them culpable of match-fixing.

The Geneva-based organization claimed that several matches believed to have been rigged between 2018 and 2020 by club members led to the decision to penalise Zoo FC.