The teams, top and second in La Liga, play on Sunday with Barcelona at home to Getafe while Real Madrid have a difficult trip to play Athletic Bilbao.

• Barca will be without the suspended Ferran Torres and Robert Lewandowski, meaning Ansu Fati and Raphinha should start against a team involved in a relegation battle with just 17 points from 17 games.

•The round of matches kicks off on Friday with Mallorca, who rested most of their first team in the Copa del Rey defeat away to Real Sociedad on Tuesday, at home to Celta Vigo. 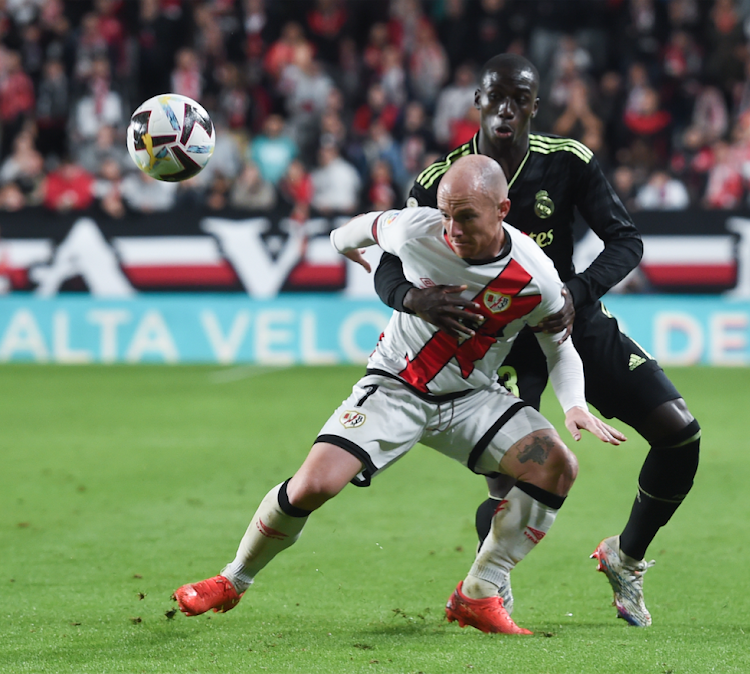 Real Madrid's Ferland Mendy (R) vies for the ball with Isaac Palazon of Vallecano during a past La Liga match
Image: XINHUA

The 18th round of matches in La Liga this weekend sees FC Barcelona, Real Madrid, Real Betis and Valencia return to league action after their adventures in the Spanish Super Cup last week and the Copa del Rey this Thursday.

The teams first and second in La Liga both play on Sunday, with Barcelona at home to Getafe, while Real Madrid have a difficult trip to play Athletic Bilbao.

Barca will be without the suspended Ferran Torres and Robert Lewandowski, meaning Ansu Fati and Raphinha should start against a team involved in a relegation battle with just 17 points from 17 games.

Getafe’s main threat will be Turkish international striker Enes Unal, but a Barca defense that has only conceded six goals all season will be confident of another clean sheet.

Real Madrid’s visit to Bilbao looks a lot tougher, although Athletic have problems in defense, with Inigo Martinez suffering from a foot injury and Yeray Alvarez likely to be suspended after the harsh red card he was shown in the Basque derby last weekend.

Yeray’s suspension means that Aitor Paredes will make his first league start against a team with Karim Benzema, Rodrygo and Vinicius Jr in attack.

Madrid have looked flat since the return of domestic football after the Fifa World Cup and their efforts in the Super Cup — where they were outplayed by Barca - and in Thursday’s difficult Copa del Rey tie in Villarreal have not left much recovery time.

David Alaba, Lucas Vazquez and Dani Carvajal are all likely to miss the trip through injury.

The round of matches kicks off on Friday with Mallorca, who rested most of their first team in the Copa del Rey defeat away to Real Sociedad on Tuesday, at home to Celta Vigo.

Real Sociedad’s visit to Rayo Vallecano gets Saturday underway, and a win would put the visitors level on points with Real Madrid. Takefusa Kubo will start after being rested in the cup, along with Diego Rico and Mikel Merino, who only played 45 minutes against Mallorca.

Espanyol have a tough rival after their cup exit at the hands of Athletic Bilbao when they host Betis, whose cup run was ended after extra-time and penalties against Osasuna on Wednesday night.

Neither side has much time to recover, but Espanyol will hope the extra half-hour of football Betis played will give them a chance to claim just their fourth win of the season.

An Atletico Madrid side without defenders Stefan Savic, Jose Gimenez and Sergio Reguilon are favorites to inflict a fifth consecutive defeat on Valladolid, although Atletico coach Diego Simeone will hope the club seals the signing of Memphis Depay in time for him to make his debut.

Saturday ends with an Andalusian derby as second from bottom Sevilla entertain third from bottom Cadiz, who are still smarting over the VAR error that allowed Elche to draw against them with a clearly offside goal on Monday night.

Villarreal face Girona on Sunday just three days after their cup tie at home to Real Madrid, while Elche continue to seek their first win of the season when they entertain Osasuna.

The round of games ends on Monday with Valencia at home to Almeria, with the home team needing to halt a slide that has left them just three points above the relegation zone.

Real Madrid have hardly had time to lick their wounds and recover tired legs before they travel to Villarreal for what looks like the toughest tie of ...
Sports
3 weeks ago

Felix, 23, is aware and confident of his potential, wants that to be respected and wants the team to adapt to his strengths.
Sports
3 weeks ago

Real Madrid are clear favourites to go through against Valencia despite their 2-1 defeat in Villarreal on Saturday.
Sports
4 weeks ago

The 22-year-old Real Madrid winger said last week the Spanish league “continues to do nothing” about “racists” attending games.
Sports
1 month ago
Post a comment
by XINHUA
Football
20 January 2023 - 00:00
Read The E-Paper