• The winning teams clinched Sh50,000 apiece which trickled down to Sh5,000 for all the participants.

• While the tournament Cabinet Secretary for Sports Ababu Namwamba said such events are key in nurturing talent from the bottom up. 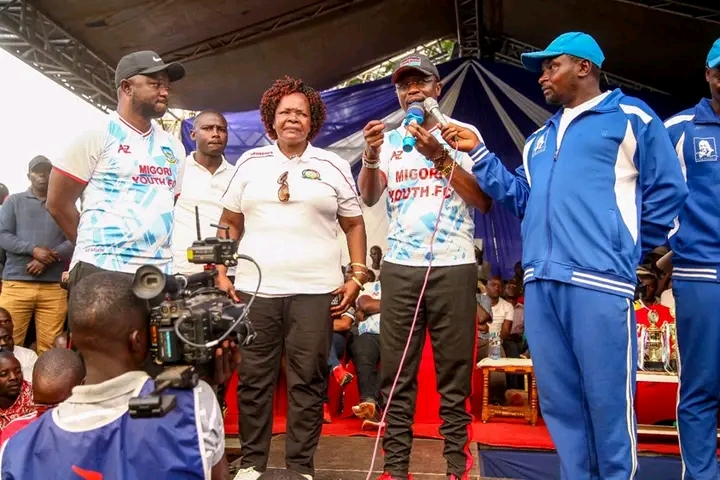 Mosfa are the champions of the sixth edition of Tukuza Talanta Tournament after edging out Homeboys FC 4-3 in a post-match penalty shootout at Rapogi Boys High School on Sunday.

The two teams fought to a barren draw in regulation time of an entertaining final which brought teams from across Uriri Constituency courtesy of area legislator Mark Nyamita.

While the tournament Cabinet Secretary for Sports Ababu Namwamba said such events are key in nurturing talent from the bottom up.

“We have the bottom-up model of nurturing talents and such grassroot tournaments will be key in pushing sports in Kenya,” he said.

Nyamita said: “Each of the four wards in the constituency sent teams to the tournament, which has been growing in strength. Six players have already been identified by various scouts.”

Sharon Awuor from Uriri Starlets won the golden glove while her teammate, Phoebe Labile, won the golden boot after topping the scorers' chart with six goals.

Clinton Musera from Homeboys took the golden glove in the men's division with John Chris from Mori FC taking the golden boot.

The winning teams clinched Sh50,000 apiece which trickled down to Sh5,000 for all the participants.

According to the organisers, their main objective is to identify talent among the youth and nurture them as they seek to revive football in the ...
Sports
3 weeks ago

The ministry will use experienced players to identify the best players.
Counties
3 weeks ago