Ferran Torres scored twice in what was a stroll from start to finish for the 2010 champions.

• It was an ominous start for Costa Rica and things quickly got worse for the 2014 quarter-finalists, who were the last team to qualify for Qatar.

• La Roja were completely dominant from the start, with Costa Rica unable to live with their pace, movement and precision when they came forward. 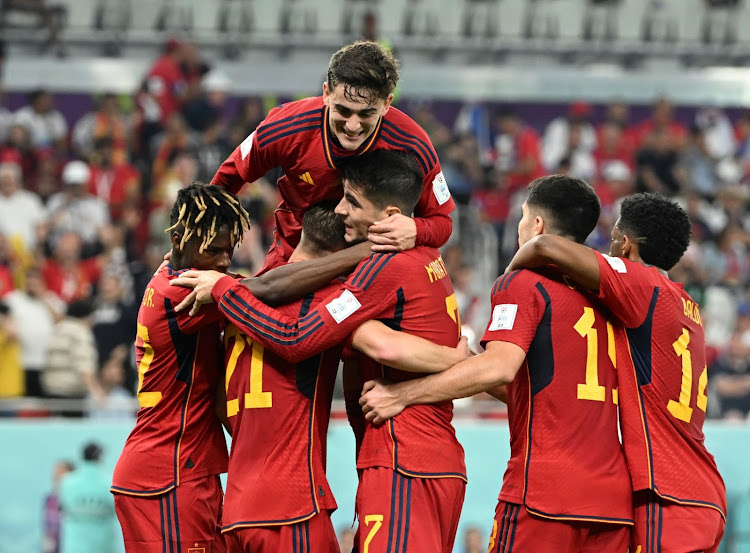 Players of Spain celebrate after scoring during the Group E match between Spain and Costa Rica at the 2022 FIFA World Cup at Al Thumama Stadium in Doha, Qatar, Nov. 23, 2022.
Image: XINHUA

Gavi announced himself on the global stage with a brilliant volley as Spain produced a sparkling passing performance to outclass Costa Rica and start their World Cup in sensational style.

Ferran Torres scored twice in what was a stroll from start to finish for the 2010 champions.

But the pick of their seven goals was Gavi's outstanding volleyed finish, with the Barcelona teenager using the outside of his foot to steer a dropping ball home via the post and become the youngest World Cup goalscorer since Pele.

This has been a tournament full of surprises, with Spain's Group E rivals Germany the latest victims with their late defeat by Japan earlier on Wednesday, but there was never a hint of another shock happening here.

La Roja were completely dominant from the start, with Costa Rica unable to live with their pace, movement and precision when they came forward.

The Euro 2020 semi-finalists went close twice in the first 10 minutes, with Dani Olmo and Marco Asensio both firing wide, but they did not have to wait long to take the lead.

Olmo had work to do to when he met Gavi's delicate chipped pass into the area, but he used his strength to hold off Oscar Duarte then span into space to expertly slot past the onrushing Keylor Navas.

It was an ominous start for Costa Rica and things quickly got worse for the 2014 quarter-finalists, who were the last team to qualify for Qatar.

Again Spain advanced up the middle of the pitch unopposed, before the ball was spread left to Jordi Alba and his driven cross was met powerfully by Asensio - although Navas should have done far better with his attempted save.

Victory was sealed just after the half-hour mark, when Torres sent Navas the wrong way from the spot after Duarte had hacked at Alba in the box.

But there was more misery to come for Costa Rica after the break, with Spain still hungry for goals.

Torres capitalised on more poor defending to make it 4-0, collecting a loose ball after bursting into the box and then calmly firing home.

Gavi's superb strike added gloss to an already glittering display, with the 18-year-old finding a finish to match his impressive performance after meeting a cross from substitute Alvaro Morata.

Another substitute, Carlos Soler, made it six after Navas failed to deal with a cross, and Morata rounded off the scoring in injury time after playing a one-two with Olmo.

Gavi is the youngest man to play for Spain at a World Cup and his goal made him the youngest goalscorer at a finals since Brazilian Pele in 1958.

The way he took it was worthy of the legend mentioned in that statistic, and capped a display which was mature beyond his years.

He was not the only young Spanish player to dazzle either, with 19-year-old Pedri also enjoying an outstanding evening in midfield.

Costa Rica were hugely disappointing but also barely allowed a kick, managing only 231 passes to 1,043 from Spain, while failing to register a single effort at goal.

Spain had lost their opening matches at the past three World Cups, including in 2010 when they went on to win the tournament.

This time, they could not have made a more emphatic start, and will be in confident mood when they face Germany in their next game, knowing another win would all but eliminate their great European rivals.