Michy Batshuayi is expected to lead the frontline against a Canada side that is featuring at the World Cup for the first time in 36 years.

• The Atlas Lions have a rich history in the World Cup and they come up against the 2018 losing finalists.

• Germany have picked up a win and a draw from their last two matches that have ended up with more than two goals scored. 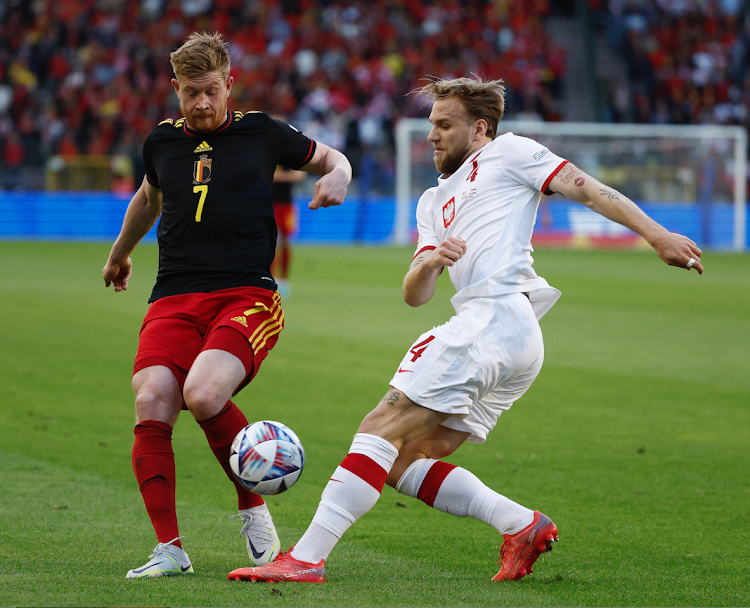 Belgium's Kevin De Bruyne in action with Poland's Tymoteusz Puchacz in a past match
Image: FILE

Tuesday produced the rudest shock of all time at the World Cup as tournament favourites Argentina lost 2-1 to Saudi Arabia.

The Green Falcons put up a spirited fight in an impressive second half performance to make the headlines and probably give themselves hope of making it to the round of 16.

For coach Herve Renard, it was a matter of understanding the opponent and that worked out perfectly. I understand that nine of Saudi Arabia’s starters against Argentina play for Al Hilal-Saudi that is coached by Argentine Ramon Diaz.

Tunisia also made us smile as they held Denmark against all odds to become the first African team to collect a point at the World Cup.

Today, another African side — Morocco — will be in action, hoping to learn a thing or two from their Maghreb brothers.

The Atlas Lions have a rich history in the World Cup and they come up against the 2018 losing finalists.

Both teams are in imperious form heading into this one and that will prove crucial. Morocco have drawn once and won all of their last five encounters while Croatia have collected maximum points in their last five.

The two sides have met only once, back in 1996, drawing 2-2 in a friendly match. Many are backing the Croats to secure the three points here simply by looking at the huge talent in the squad. We are expecting a tight and tense game with few goals.

This is a game that could not just wait! Two top sides from different continents colliding in this Group 'E' encounter.

Former world champions Germany are currently ranked second in the world. Their consistency is what has put them up there. The Blue Samurai, on the other hand, have an almost complete squad.

Germany are missing some key players for this one and that might be their main undoing.  Winger Leroy Sane and forwards Thomas Muller and Niclas Fullkrug are out injured.

Germany have picked up a win and a draw from their last two matches which ended with more than two goals scored. Back in 2006, there were goals from each of the two sides and this is expected to continue today.

In 2018, many predicted that the Red Devils would clinch the World Cup. This was not the case as they finished third in the tournament won by France.

With Romelu Lukaku's fitness still in question, Michy Batshuayi is expected to lead the frontline against a side that is featuring at the World Cup for the first time in 36 years.

With the mood at the Belgium camp not at its best, John Herdman's side may fancy their chances but, to be honest, that will be a tall order against such an experienced Belgium side.

Expect Belgium to score the first goal in this one.

Brazil are five-time champions and will be looking to take their trophy tally to six in Qatar.
News
2 weeks ago