• Poland's last five World Cup goals - dating back to 1998 - have all been via set-pieces so you would have banked on the usually reliable Lewandowski to hit the net.

• But the 34-year-old extended his goalless run in the competition to 360 minutes by missing the penalty, having also failed to score in the three games four years ago. 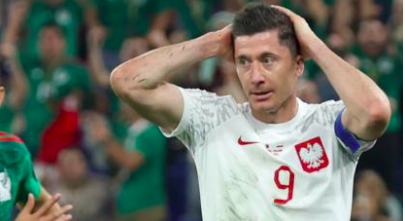 Robert Lewandowski had a penalty saved as Poland and Mexico played out a goalless World Cup draw at a fervent Stadium 974.

Lewandowski has never scored in the tournament and his wait continues after a tame effort was kept out by Mexico's veteran goalkeeper Guillermo Ochoa.

The 40,000-capacity venue was filled largely by raucous Mexico supporters and deafening cheers rung round when Lewandowski's shot stayed out.

A forgettable first half saw Alexis Vega head narrowly wide and the only effort on target came when Jorge Sanchez's shot from the angle was pushed away by Wojciech Szczesny.

Hirving Lozano's curling effort from range was straight at the Poland goalkeeper, before the game finally sparked into life in the second half.

But both sides had to settle for a draw after Ochoa, 37, dived the right way to keep out Barcelona striker Lewandowski's penalty, awarded after the referee watched a replay on the pitchside monitor.

Earlier in the day in Group C, Saudi Arabia caused one of the biggest shocks in World Cup history by coming from behind to beat heavily fancied Argentina.

With Saudi Arabia creating a seismic World Cup moment with their stunning victory, it leaves this group wide open and all four sides will now harbour hopes of reaching the last 16.

A tremendous atmosphere at Stadium 974, built using that number of shipping containers, was let down by a poor spectacle on the pitch.

Lewandowski, who has 18 goals in 19 games for Barcelona this season, was jeered by the Mexican supporters throughout the game and had a huge opportunity to silence the opposition supporters.

The striker was brought down in the box by Hector Moreno and after advice from the video assistant referee to review to incident, Australian referee Chris Beath awarded a penalty.

Poland's last five World Cup goals - dating back to 1998 - have all been via set-pieces so you would have banked on the usually reliable Lewandowski to hit the net.

But the 34-year-old extended his goalless run in the competition to 360 minutes by missing the penalty, having also failed to score in the three games four years ago.

The draw means Poland have won just one of their last nine opening World Cup games and the miss could prove crucial as they aim to make it out of the group for the first time since 1986.

Mexico, meanwhile, have made it to the knockout stage at the last eight World Cups but may see this as a missed opportunity against a Poland side that offered very little in attack.

Napoli forward Lozano had their best chances, but a strike from range and flicked header were both kept out by Szczesny, while Uriel Antuna cut in from the right but strangled a shot straight at the goalkeeper late on.

Lionel Scaloni’s Argentina came into the tournament among the favourites, on the back of a 36-game unbeaten run that included winning the 2021 Copa ...
Sports
2 weeks ago
Post a comment
by BBC NEWS None
Football
22 November 2022 - 21:44
Read The E-Paper