Having just spoken with my sources at Anfield, he is considering dropping his favoured 4-3-3 set-up in favour of 4-2-3-1 which would feature his attacking line-up of Salah, Jota, Diaz and Nunez.

•The very smart buy of Gabriel Jesus for £45million from Manchester City and William Saliba’s rock steady performances at the centre in defence.

•All of Ten Hag’s boasts of the “new spirit” at United were shown to be worthless. 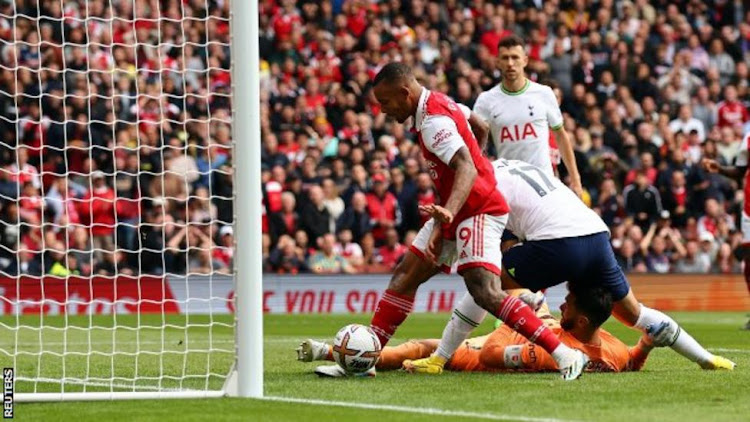 Arsenal against Liverpool is a match between two managers: One on a high and one with plenty of problems.

Mikel Arteta’s Arsenal are sitting on top of the table but still most people in the Premier League believe that Manchester City will take the title. Arteta is determined to prove them wrong.

He said this week: “You see a sense of something that is unique here at Arsenal and it’s real. It is great to be a part of it as a player and a manager.”

Arsenal will again go for the 'risk and reward' as they did when they beat Tottenham. Arteta believes two players have enabled the Gunners to rise to a new level this season.

The very smart buy of Gabriel Jesus for £45million from Manchester City and William Saliba’s rock-steady performances at the centre in defence.

Martin Odegaard and Thomas Partey will again form a partnership which will prove difficult for Liverpool to control in midfield.

Partey’s inclusion was a last-minute decision for Arteta against Spurs but despite his worries that bringing him back into the side from injury was a risk, the Ghanaian was excellent, making chances and controlling midfield.

Liverpool coach Jurgen Klopp has to take a different approach. He says that all teams occasionally suffer from a lack of confidence and his job on the training field this week has been rebuilding.

Having just spoken with my sources at Anfield, he is considering dropping his favoured 4-3-3 set-up in favour of 4-2-3-1 which would feature his attacking line-up of Mo Salah, Digo Jota, Luiz Diaz and Darwin Nunez.

Klopp has plenty of problems with Salah, a shadow of the player we saw last season. Nunez is taking time to settle and missing games after receiving a red card.

His English is not that strong yet and the manager talks to him mainly through an interpreter and is convinced he will become an automatic choice for the first team.

Sadio Mane’s transfer unsettled the forward line and it is taking time to adjust. Klopp’s defence is not the reliable rock it was last season with Van Dijk nowhere near his best and that is why the line-up could be three central defenders because Klopp acknowledges that Arsenal’s Bukayo Saka, Jesus and Gabriel Martinelli will severely test them, especially at the Emirates Stadium.

After losing to Arsenal last weekend, Tottenham coach Antonio Conte has angrily defended his methods and attacked critics claiming: “You can concede six, seven or eight goals and in the Premier League that happens a lot of times."

"In my career it never happened and I don’t like to play open football and concede a lot of space and concede six, seven or eight goals. I won in England and I won in my past and I think I can teach football to many people.”

His well-tested practice of sitting deep and breaking on the counter-attack failed against Arsenal and critics are suggesting that high-flying Brighton will again prove a test for his approach to a game.

Brighton’s Leandro Trossard and Danny Welbeck are in sparkling form at the moment and Tottenham’s defence will have to do a lot to contain them. When Conte was asked about why he is not playing Djed Spence in defence, he immediately defended his decision to leave him on the bench saying: “We are talking about a young player with good prospects but I try to pick my strongest team and I have to consider everything I see during the week’s training sessions.”

He also defended his decision not to play Matt Doherty as he fights to regain full fitness.

On Monday morning Erik Ten Hag called his Manchester United players in for a crisis meeting at the Carrington training headquarters.

His anger was obvious as his highly-paid players had left his reputation shredded in pieces and spread about the pitch at City’s Etihad Stadium. Millions around the world had witnessed his team being thrashed 6-3 by local rivals and Ten Hag was furious.

All of Ten Hag’s boasts of the “new spirit” at United were shown to be worthless.

United legends Roy Keane and Rio Ferdinand have called for the coach to bring in Cristiano Ronaldo and Casemiro, two world superstars who sat next to each other on the bench against Manchester City. Neither were used.

They both looked frustrated and aimed their stares at Ten Hag. Keane has said how ridiculous it was not to bring on Ronald, terming it disrespectful to a player who has achieved so much. He warned that the situation will soon turn 'ugly'. However, Ten Hag has said Ronaldo can leave in the January transfer window.

I understand that Barcelona are watching the situation at Chelsea regarding Jorginho and have sent scouts to Stamford Bridge to monitor his performances.

The 30-year-old has only 10 months left on his current contract and unless he agrees to a new deal, he can talk to other clubs in January.

Barca legend Sergio Busquets is 34-years-old and his contract will also expire next summer and Jorginho is being considered as a replacement.

Barca have stated they will let Busquets decide his future as a show of loyalty to one of their best and most respected players.

Jorginho joined Chelsea from Napoli for £57million in 2018 and his partnership with N’Golo Kante and Mateo Kovacic has been the heart of the Chelsea midfield but everything depends on how new coach Graham Potter sees his team going forward.

Maguire told not to dwell on mistakes

Everything has gone wrong with Harry Maguire recently.

Dropped by Erik Ten Hag and abused from the stands by loyal United supporters and opposing fans alike, Maguire is now experiencing a serious lack of confidence.

The pressures of the Premier League are enormous and several retired players are voicing opinions on how this once-highly respected central defender can regain his former glory.

Ten Hag has been working hard with his defender and has installed a programme of high-speed running, accelerations and instant stopping combined with long-ball clearances, headers and jumping high.

A sports psychologist says the one thing Maguire must not do is to listen to the criticism and the supporters.

“He must block things out when he makes a mistake and not dwell on it,” said the psychologist.

I am told there is a sports term called 'sports efficacy' which is your internal mechanism to believe in yourself at any given moment.

Maguire would appear to believe in himself but his emotional responses are not as finely tuned as they used to be and he must learn to block out negative thoughts.

Most of all, he must not look at social media and any criticisms aimed at his performances.

It’s all down to leg work with Kane

Harry Kane has been praising the work done by his physio in preventing his injury-prone ankles from causing problems.

Canadian-based sports medicine specialist Dr. Alejandro Elorriaga Claraco flies into the UK every month to work with Harry and stays at his home. The striker said that after working for several hours a month with Claraco, his ankles are completely different now and much stronger which is why he has enjoyed a long run in the team.

Newly-installed Brighton head coach Roberto De Zerbi doesn’t believe in standing on the sidelines during training and shouting his instructions. The Italian coach, who played over 30 games for Italian club Napoli in Serie A, joins in with training on the pitch wearing a tracksuit and as he is still in his early forties he retains a good level of fitness.

I hear that Prince William, heir to the British throne and newly-installed Prince of Wales, is an Aston Villa fan.

He sends regular messages to coach Steven Gerrard wishing the team well for their next match and a VIP seat is available whenever his schedule permits him to visit the club. I don’t remember Prince Charles, now King Charles III, doing anything like that!

Representatives of the Spanish, Portuguese and Ukrainian football associations confirmed their plans at Uefa’s headquarters on Wednesday.
Sports
1 month ago

The visitors, looking to respond after losing to Premier League rivals Arsenal at the weekend, put in a largely encouraging display but were let down ...
Sports
1 month ago

Gabriel Jesus taps in for Arsenal to score in consecutive Premier League home games for the first time since a run of four for Manchester City in November 2020
Post a comment
by BILLINGTON
Football
07 October 2022 - 00:00
Read The E-Paper