Hakim Ziyech has not played for Morocco in over a year after falling out with a former coach.

• The 29-year-old announced his retirement in February after falling out with Vahid Halilhodzic, who was dismissed in August.

• “When I spoke to him, he accepted immediately and told me that he couldn’t wait to return to the squad,” the former Wydad Casablanca coach said. 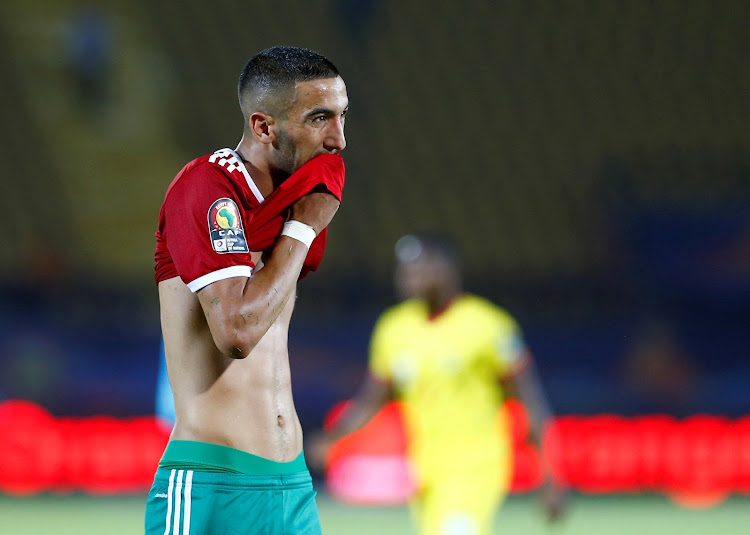 Morocco's Hakim Ziyech reacts during a past match
Image: FILE

The 29-year-old announced his retirement in February after falling out with Vahid Halilhodzic, who was dismissed in August.

New coach Walid Regragui has wasted little time in recalling the winger as he prepares for his first game in charge, against Chile and Paraguay later this month.

“When I spoke to him, he accepted immediately and told me that he couldn’t wait to return to the squad,” the former Wydad Casablanca coach said.

Ziyech has not played for the Atlas Lions since June 2021 after his war of words with Halilhodzic, who was fired after months of tension with the football federation over player selection, particularly his frosty relationship with the forward.

The Bosnian accused Ziyech of feigning injury to skip mid-year friendly matches and left him out of the World Cup qualifying campaign and this year’s Africa Cup of Nations. A month before parting ways with Halilhodzic, Morocco’s football federation president Faouzi Lekjaa stated that Ziyech — who had refused to play under the then coach — was still available for selection.

He is now in line to feature against Chile in Barcelona on 23 September and Paraguay in Seville four days later, and possibly November’s World Cup itself.

“I know he has quite a strong character,” said Regragui. “For example, he can raise his hand in protest if I replace him and is a player who does everything to assert himself on the pitch to play. We will wait for the Hakim that all Moroccans love, the one who fights on the pitch and who gives everything to his team.”

“I prefer players who discuss decisions rather than passive players who are simple performers,” added Regragui, who won this year’s African Champions League.

“An angry player after being substituted, I don’t mind as long as he plays a good game. If he is unhappy, it proves that he wants to play, score and help the team.

“What matters is to help your own people win and to be up to it. As for me, I don’t need to have coffee every day with one player or another to understand each other. Performance on the pitch will be the sole judge.”

Ziyech has suffered a poor start to the season with Chelsea, whose next game will be played under new coach Graham Potter.

“He has a lot of quality, even if he doesn’t play regularly he’s a Chelsea player and he is not just at any club.”

There is also a return to the squad for Bayern Munich defender Noussair Mazraoui, who has not played for Morocco since October 2020 after also falling out with Halilhodzic.

Younes Belhanda, whose last appearance was at the 2019 Nations Cup, is also recalled, while uncapped former Germany Under-21 midfielder Abdelhamid Sabiri has also been called up, along with Italian-born Bari forward Walid Cheddira.

Morocco have been drawn in Group F at the World Cup with Belgium, Canada and Croatia.

Chelsea’s Ziyech, who is Morocco’s biggest star, fell out with the coach last year and did not play for the country in any World Cup qualifiers or at ...
Sports
4 months ago

"I will not return to the national team. That is my final decision," —Ziyech
Sports
7 months ago

No way back for Ziyech, says under-fire Morocco coach

Morocco meet the Democratic Republic of Congo over two legs at the end of March in the play-offs for the World Cup in Qatar in November.
Sports
7 months ago
Post a comment
WATCH: The latest videos from the Star
by BBC
Football
14 September 2022 - 00:00
Read The E-Paper