• Newcastle boss Eddie Howe called the late winner a “sickener” after his side had led 1-0 through a debut goal from £60m record signing Alexander Isak. 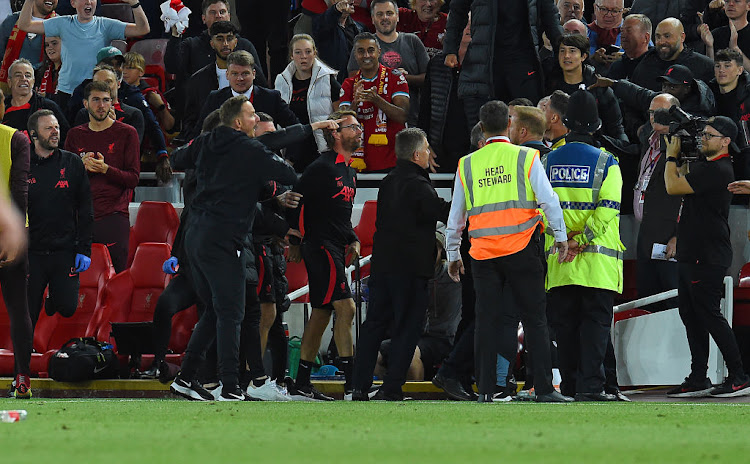 Members of Liverpool and Newcastle technical benches clash during their match on August 31
Image: HANDOUT

Liverpool coach John Achterberg and Newcastle’s Daniel Hodges have been charged by the Football Association after an incident during the Reds’ 2-1 win on August 31.

The pair have been charged with improper behaviour.

Hodges is Newcastle’s head of performance. Both have until September 8 to respond to the charge.

It follows a review by the FA into incident where a Newcastle staff member appeared to throw an object towards the Liverpool technical area.

Newcastle boss Eddie Howe called the late winner a “sickener” after his side had led 1-0 through a debut goal from £60m record signing Alexander Isak.

Roberto Firmino equalised for Liverpool before Carvalho hooked in from close range to win the game with almost the last kick.

The Gunners won their first five games of this season but Sunday marked the first time they had faced a side who finished in the top six last term.
Sports
2 months ago

The Brazilian opened the scoring 10 minutes before half-time in the pulsating duel, sweeping a shot into the far corner.
Sports
2 months ago

Win over Newcastle will be remembered for many years, says Klopp

The visitors’ new £60m striker Alexander Isak crowned an impressive debut with a goal to give Eddie Howe’s side the lead seven minutes before the ...
Sports
2 months ago
Post a comment
by BBC
Football
08 September 2022 - 00:00
Read The E-Paper