According to the nitty-gritty of the deal, K'Ogalo will pocket the initial batch of Sh70 million in the first year.

•Club chairman Ambrose Rachier was ecstatic about the development, saying the funds would turn around the fortunes of the club. 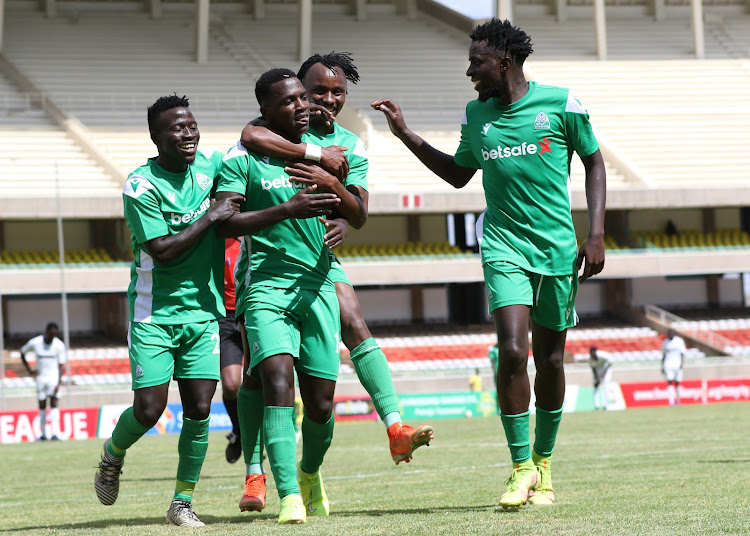 Gor Mahia players celebrate during a past match against Kariobangi Sharks
Image: FILE

The club unveiled their latest shirt sponsor during a colourful ceremony held at the Ole Serani hotel in Nairobi on Tuesday.

According to the nitty-gritty of the deal, K'Ogalo will pocket Sh70 million annually for the next three years, with an additional Sh6.5 million being channelled into kitting and players insurance.

Club chairman Ambrose Rachier was ecstatic about the development, saying the funds would turn around the fortunes of the club.

"We are pleased to announce our new shirt sponsor. We have signed a three-year deal worth Sh76.5 million per year. This includes Sh5m for kitting and Sh1.5 million for players' insurance," Rachier confirmed.

"This is a new dawn for us and we appreciate the noble gesture by Betafriq who has agreed to pump the funds into the club's account.

“As a club, we rarely delay paying salaries. However, we have all experienced a tough period occasioned by the outbreak of the Covid-19 pandemic. With this deal, we expect to resume full normalcy," he said.

Club skipper Philemon Otieno thanked Betafriq, saying their arrival signalled better days ahead and that the funds would boost the morale of the players.

“Things have been tight for the playing unit. We took salary cuts immediately after the Covid-19 pandemic and we had to adjust accordingly,” Otieno said.

Gor Mahia have grappled with tough economic times in recent years as they struggle to keep the burgeoning payroll in check.

Things spilt out of control at the end of the 2019/2020 season when the club witnessed a mass exodus of star players after official Kenyan Premier League sponsors, BetKing withdrew from the deal.

The arrival of Betsafe ameliorated the situation until last month when the firm also severed ties with the club, leaving it hunting for new partners.

Betsafe penned a three-year contract with K'Ogalo in 2020. According to the deal, the club would receive Sh55 million every year.

However, in the second year, the amount was slightly slashed owing to financial constraints occasioned by the Covid-19 pandemic.