Watford were sent down for the second time in three seasons after a 1-0 defeat at Crystal Palace.

•Palace's winner arrived through a first-half Wilfried Zaha penalty after Watford defender Hassane Kamara - who was later sent off - was judged to have used his arm to block a Michael Olise header. 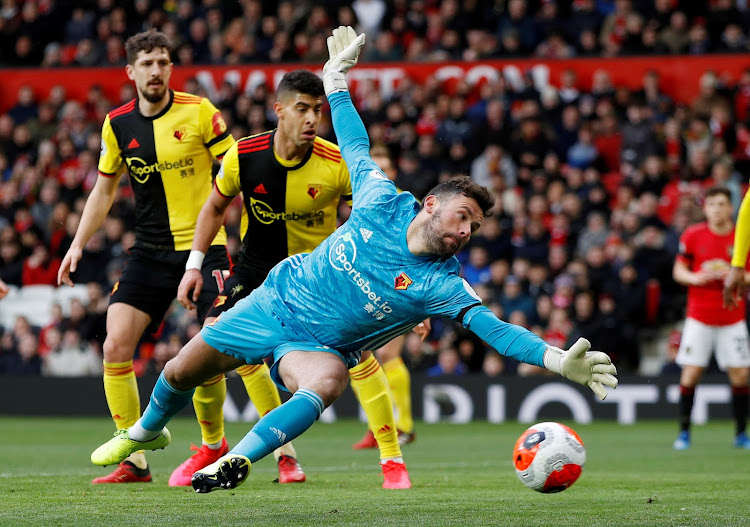 Watford's Ben Foster in action during a past match
Image: /REUTERS

Watford goalkeeper Ben Foster said some of his teammates have not been prepared to give maximum effort over 90 minutes after the Hornets' relegation from the Premier League was confirmed.

Watford were sent down for the second time in three seasons after a 1-0 defeat at Crystal Palace.

"You just don't really know what you're going to get from us, to be perfectly honest," the 39-year-old said.

"We've got too many players who are happy to put it in for an hour, 70 minutes, but then probably fall off and happily let it go in the last 20 minutes.

"You can't have that. When you're a team like us, the minimum is giving it everything you've got. The ability you can forego a little bit and accept that you might not have the quality of some players, but you've got to put the effort in."

Watford went into the game at Selhurst Park with their fate all but sealed following last week's home defeat by Burnley, which Foster admitted "really took it out" of the Hornets squad.

"You could see the confidence was low, we were really lacking today," added the former England keeper, who was also part of the Watford side that suffered relegation at the end of the 2019-20 season.

"Last week's defeat by Burnley really took it out of us. We knew before the game that it was nigh-on impossible. We wanted to come and compete, and I think we did."

Palace's winner arrived through a first-half Wilfried Zaha penalty after Watford defender Hassane Kamara - who was later sent off - was judged to have used his arm to block a Michael Olise header.

"We felt it probably wasn't a penalty so we feel a little bit hard done by," said Foster.

"But credit to the lads in front of me today. They gave what they could but the confidence was lacking."

Watford boss Roy HodgsonHodgson said he considered Watford's relegation to have been confirmed after last week's defeat by Burnley earlier this week, Watford boss Roy Hodgson indicated that his managerial career will end when he departs Vicarage Road at the end of the season, and the 74-year-old was given a warm reception by the Palace fans when he returned to Selhurst Park to face the side he left last year.

"Roy's been fantastic," he said. "He came in and got a group of lads who were a bunch of misfits, to be perfectly honest, and got us playing a style where we know we're all on the same page at least.

"We know that we can be competitive when we're doing it properly, but in some games, we've had some stupid mistakes and then heads drop. Confidence is a massive thing in sports and within our team, it's a huge problem.

"It's been a really tough season for us all. Hopefully, in the Championship next season we can do what we did last season and give the fans something to smile about, and hopefully bounce back at the first time of asking."

Speaking to BBC Radio 5 Live after the game, Hodgson took exception to the media saying Watford's relegation had been confirmed at Palace, saying he considered his side's return to the Championship to be rubber-stamped after the loss to Burnley.

"My emotions are more veering towards the reception [from the Palace supporters] because we were relegated last week," said Hodgson, who also outlined his belief that Watford's squad are capable of securing an immediate top-flight return next season.

"I don't quite understand why the mass media continue to suggest that it's only today we were relegated. When we lost the last game and were 12 points behind two or three teams and with a much inferior goal difference, even the greatest optimist in the world would have suggested, well, that's probably it as far as we're concerned.

"So today I'm doubly pleased. I'm delighted with the reception from the fans - that really touches my heart - and I'm so pleased they feel I was able to be of use to the club during my time here.

"But I'm also very pleased with the team's performance because that was a very tough game for us."

Hodgson to leave Watford after end of season

Hodgson, who was honoured with a CBE for his services to football, said he will not extend his stay at Vicarage Road after joining Watford on a ...
Sports
8 months ago

“Now we need to process that and come back, with our people at home and the last four games we have,” said Guardiola.
Sports
8 months ago
Post a comment
by BBC
Football
09 May 2022 - 00:00
Read The E-Paper