•"The one thing that's really important about African football is it's a sign of representation. A sign of pride," said Sam.

•Naya Ashorobi is rooting for two countries in the tournament - Ghana and Nigeria. Both have a long-standing but healthy football rivalry with each other, which might make for an awkward meal around the dinner table if they both reach the final. 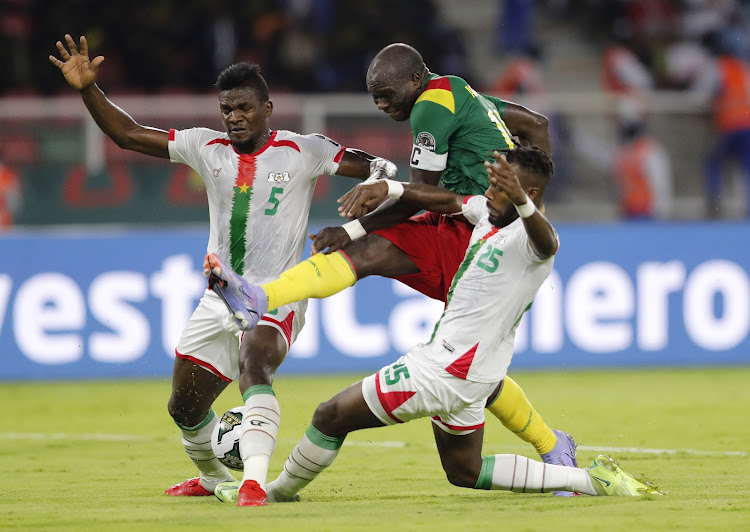 It's been almost three years since it last took place but Africa's biggest international football tournament - the Africa Cup of Nations - is back.

Some of the world's biggest players are taking part in the delayed 2021 tournament in Cameroon, including Mohammed Salah, Sadio Mane and Riyad Mahrez, who are representing Egypt, Senegal and Algeria respectively.

But the tournament hasn't been without controversy - some of the sport's most prominent figures, including Ian Wright and Patrick Vieira, have called coverage of Afcon "disrespectful".

It's after there were calls to postpone the tournament to ease fixture congestion, and some players were questioned on whether they'll attend if chosen by their respective countries.

Radio 1 Newsbeat caught up with three fans supporting their home nations from the UK about what the tournament means to them, why it's so important, and what they've made of the coverage so far.

It pulls me closer to my roots

Sam is 22 and living in London, but his parents are Nigerian. He started watching Afcon in 2015 as a way to get closer to his Nigerian roots.

"The one thing that's really important about African football is it's a sign of representation. A sign of pride," he said.

"I don't think that's based on the actual football itself. It's more about just representing your country, putting on that shirt, whether you're from Ghana, Nigeria or Ivory Coast. I'm Nigerian, I'm proud. And this is my country."

The last time Afcon took place was the summer of 2019, meaning some of Africa's best players, along with their supporters, have had a long 18 months to wait, which has led to much anticipation and excitement, Sam says.

"When you're watching it on TV, the crowds in the stadiums are lively. When players score for their respective countries, they have their own way of celebrating, like dancing, which gets the crowd going. It gives African players the chance to showcase their skills too."

But he added he does feel like the tournament has been "disrespected".

"It's not been given enough hype to people about what the tournament is about, it's very different from the European, South American side of the football. The tournaments all work in different ways. Maybe it's because people don't know enough about it."

Cape Verde off to a perfect Afcon Start

Darren is hoping the Black Stars can win their first Afcon tournament in 40 years.

Darren agrees with Sam and tells Radio 1 Newsbeat the long wait African players have had to play in this tournament - coupled with questions over whether it should go ahead - has left him frustrated.

The 26-year-old, who is of Ghanaian heritage, said: "African players have had to even wait even longer than European players to participate in the tournament, but I feel like when I've listened to some managers, interviews, press conferences and reporters, they've not really shown much respect to the competition.

"As a footballer, you'll want to do everything possible to play for your country when the tournament comes around, and it's quite frustrating when you hear some comments."

Ajax striker Sebastian Haller was recently asked if he was planning on going to the tournament if chosen by the Ivory Coast. Haller asked the reporter whether that question would ever be put to a European player about the Euros.

Another player in the headlines has been Emmanuel Dennis, who was reportedly refused permission to join up with the Nigeria squad by his parent club Watford.

"I understand that the Euros were on in a time when clubs have finished their football, and the Africa Cup of Nations is on right in the middle of club football season, but when you've got a situation with Dennis who plays for Watford, and for whatever reason, he hasn't been allowed to go and play - I know he's a key player for Watford, but I think that's pretty disrespectful."

'Give Afcon a chance'

Naya Ashorobi is rooting for two countries in the tournament - Ghana and Nigeria. Both have a long-standing but healthy football rivalry with each other, which might make for an awkward meal around the dinner table if they both reach the final.

Naya thinks Nigeria are in for the best chance of winning with the squad they have"Because I have parents from both countries, if any side was to win I'd be happy for both really," the 20-year-old told Newsbeat.

"Afcon means a lot to me. It's really, really important. It's lovely to see and support your country in any competition, whether that be the World Cup, Euros, or Africa Cup of Nations."

Naya says it's great for people in the UK to have a competition "where we can watch our home countries compete for trophies and watch players that we don't normally get to see all the time actually play together".

But she says there's "often a lot of questioning around players that also choose to represent their African countries, especially if they do have some sort of European background".

She also thinks the tournament would benefit from better coverage which she says "isn't as in-depth as it could be", but adds people should also give it a chance.

"People should try to get more into Afcon. Get more educated about the countries, the tournament in general, and maybe that will help them to kind of understand the importance of it - and why players shouldn't really be questioned or people shouldn't be puzzled when they choose their African country over their European one.

"Africa is a really big continent and there are so many people there that love to watch their country play."

Experienced Zambian official Janny Sikazwe, who took charge of the 2017 Cup of Nations final, initially blew for the final whistle on 85 minutes as ...
Sports
2 weeks ago

Captain Vincent Aboubakar and Karl Toko Ekambi both scored twice as Cameroon turned in a strong second-half performance and advanced to six points ...
Sports
2 weeks ago
by BBC
Football
15 January 2022 - 05:00