Frank Odhiambo's 56th-minute goal was all the 19-time Kenyan champions needed to bag maximum points from the action-packed encounter at Moi Stadium, Kasarani on Sunday.

•In other matches, Vihiga Bullets stunned Wazito 4-2 at Bukhungu Stadium.

•Posta Rangers pipped champions, Tusker 1-0 while KCB lost to Bidco United by a similar margin at Kasarani annex. AFC Leopards were held to a one-all draw by visiting Nzoia Sugar at Nyayo Stadium. 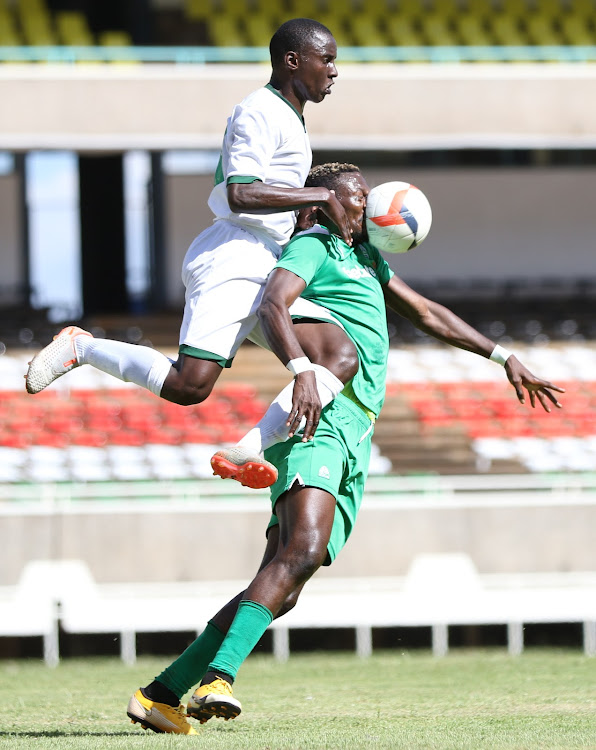 Frank Odhiambo's 56th-minute goal was all the 19-time Kenyan champions needed to bag maximum points from the action-packed encounter at Moi Stadium, Kasarani on Sunday.

“The outcome is very important especially considering that we have gone several matches without a win,” said Omollo.

“Also key to note is that several of our star players are nursing injuries and some, such as Ernest Wendo, are still waiting for the contracts to be renewed.”

As Omollo celebrated his win, a visibly dejected Mathare United gaffer, Ezekiel Akwana attributed their defeat to a blunt attacking force that failed to capitalise on glaring opportunities.

“We were not just sharp enough in the attacking third and I think it's high time we considered beefing up the squad if we expect positive results,” said Akwana.

George Odhiambo almost broke the deadlock in the 18th minute but failed to bury a sitter after a brilliant interchange of crisp passes between him and Dennis Ng'ang'a down the left channel.

A couple of minutes later, Ng'ang'a's rasping volley swished past the target by a whisker before Congolese striker Yangayay Sando Sando failed to connect with an enticing Boniface Omondi cross with the Slum Boys keeper Byran Omondi already beaten.

In the 35th minute, Odhiambo pulled off scintillating footwork that left Kennedy Otieno sprawling on the ground before sidestepping Martin Ongori but the resultant effort rattled the side of the net.

For Mathare, the chances were minimal and far in-between.

The Slum Boys got their best chance in the 16th minute when Martin Nderitu wriggled his way past Frank Odhiambo but his shot, about 19 yards out didn't trouble Adama Keita at all.

Eager to draw the first blood, Omollo effected a change minutes after the restart, bringing on Jules Ulimwengu for off-colour Sando Sando.

His decision paid off handsomely as incessant inroads into the opponents' territory by the rejuvenated striking force ultimately bore fruits.

It wasn't long before Frank Odhiambo poked the ball into the back of the net on the second bite of the cherry after a tense goalmouth scramble in the six-yard area.

The outcome leaves Gor fifth on the log with 22 points while Mathare are 17th with seven.

KCB had their maiden title ambitions punctured as they lost 1-0 Bidco United at Moi Stadium, Kasarani Annex. AFC Leopards were held to a one-all draw by visiting Nzoia Sugar at Nyayo Stadium.