The 69-year-old former Nantes star and Paris Saint-Germain player arrives at his third Africa Cup of Nations hoping Morocco can shed their underachiever's tag and end a 46-year wait for a second title.

• The straight-talking Halilhodzic omitted Chelsea midfielder Hakim Ziyech from his squad in Cameroon, calling him a “disruptive influence”

• Halilhodzic came full circle when he accepted the Morocco job in 2019, succeeding Frenchman Herve Renard-the only man to win the Cup of Nations with two different countries. 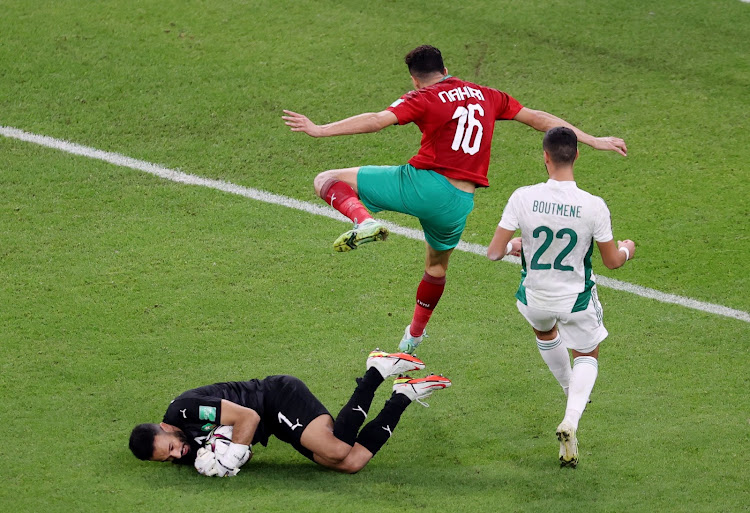 Morocco's Anas Zniti in action against Algeria during the Arab Cup
Image: REUTERS

From the joy of leading Raja Casablanca to African glory, giving Germany a run for their money at the 2014 World Cup, to the anguish over his bitter departure as Ivory Coast boss, it’s been a wild ride for Morocco’s Bosnian-born coach Vahid Halilhodzic.

The 69-year-old former Nantes star and Paris Saint-Germain player arrives at his third Africa Cup of Nations hoping Morocco can shed their underachiever's tag and end a 46-year wait for a second title.

The straight-talking Halilhodzic omitted Chelsea midfielder Hakim Ziyech from his squad in Cameroon, calling him a “disruptive influence”, and hopes to fare much better than in past appearances with Ivory Coast and Algeria.

Twelve years ago, a fancied Ivorian side exited after losing 3-2 to Algeria following extra time in the quarter-finals of a tournament rocked by a militant attack on the Togo team bus that killed three people.

“It was a very difficult situation at the 2010 Cup of Nations. Togo, in our group, were attacked by rebels. My players were doing everything to leave the tournament,” Halilhodzic told AFP.

“Didier Drogba, Yaya Toure were telling me: ‘Vahid, we can’t, we’re under threat.’ I think they were almost relieved to be eliminated. They were partly right, I understand them, but that cost me my place for the World Cup after we’d had an exceptional run.”

Halilhodzic was replaced by Sven-Goran Eriksson for the 2010 World Cup, and the nature of his dismissal still rankles to this day.

“Algeria was our first defeat. It was more than a lack of respect, it was disgusting, I didn’t cope well with it, I received a fax, neither the president nor even the secretary met with me to explain it,” he recalled.

“ You didn’t win the Cup of Nations, it’s over.’ They told me in a cruel way without any class. The players called me during the World Cup and were sorry for me.”

More disappointment followed for Halilhodzic with a group stage exit as coach of Algeria at the 2013 edition, but his side grabbed the world’s attention a year later by giving Germany a huge fright in Brazil.

“The 2014 World Cup is one of my best memories. I completely rebuilt the team after arriving (in 2011) and it wasn’t easy,” said Halilhodzic.

“I remember the criticism when I played guys like (Islam) Slimani, Riyad Mahrez... Today they understand I was right.”

Algeria reached the World Cup knockout phase for the first time and took Germany to extra time in the last 16, ultimately losing 2-1 to the eventual champions.

“The welcome on our return home was phenomenal,” said Halilhodzic.

“I don’t know how many people were out in the streets. We nearly pulled off one of the biggest shocks. We were so close in the match against Germany.

“I’ve never watched the game back, it’s a great memory but one of my biggest regrets as a coach.”

Halilhodzic came full circle when he accepted the Morocco job in 2019, succeeding Frenchman Herve Renard-the only man to win the Cup of Nations with two different countries.

It was in Morocco where Halilhodzic’s coaching career took off after he led Raja Casablanca to the 1997 CAF Champions League title, the biggest prize in African club football.

Out of work after a stint with second-tier Beauvais in France was cut short over a coaching license dispute, Halilhodzic was approached by former France manager Henri Michel and Michel Hidalgo, the man who led Les Bleus to victory at the 1984 European Championship.

“I had no job, I had lost everything during the war in Yugoslavia. I needed to work,” Halilhodzic recounted.

“Henri Michel and Michel Hidalgo called me, saying: ‘A big club in Morocco wants you to come.’

“We were almost knocked out of the African Champions League, then we won almost everything and four months later we were champions of Africa.

“On the corniche, there were millions of people, an event etched in my memory. And I was living in the Wydad neighbourhood, the other big club in the city!”